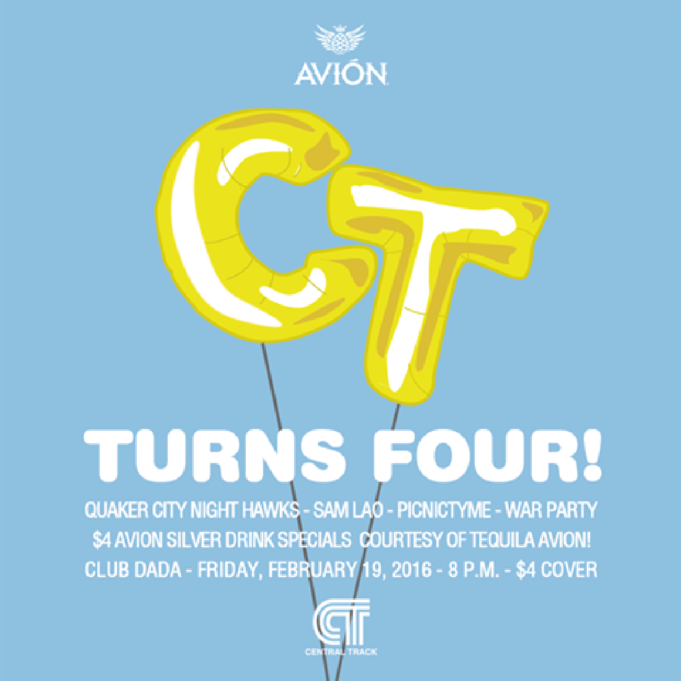 1) Show of the week alert: Central Track, the Dallas pop culture and fashion blog is celebrating its fourth anniversary on Friday night at Club Dada in Dallas. To Pete Freedman et al over there in Central Track Tower or wherever your media empire is headquartered, congrats on another year, and thanks for putting together this dope show: War Party (see this week’s cover), Sam Lao, Picnictyme, and Quaker City Night Hawks. Pretty rad having a couple Cowtown rock bands bracket a pair of Dallas’ top rappers. Here’s some of War Party playing Killer Instinct instead of going to Record Store Day:

2) Do you the Dandy Warhols? What are you, like 40 years old? Haha just kidding, ’90s music fans – I know some of you were actually born in that decade! That might make older people groan and write “smh” on a Facebook post (assuming they aren’t so old as to know what that stands for, and don’t feel bad if you have to look it up, because I didn’t know what tfw meant either), but I bet my parents probably rolled their eyes the instant I discovered Houses of the Holy.

Anyway, the Dandy Warhols are not playing, but bassist Zia McCabe, aka DJ Rescue, will be spinning records at the Boiled Owl Tavern on Saturday night as part of the Owl’s fourth anniversary night, which is themed around “Studio 54.” Throw on your finest synthetic fibers, your widest lapels, and your fakest giant afros and get ready to boogie – I assume DJ Rescue will be saving lives with a lot of funk and disco, and there’s also a Martin House tap takeover. Event is free, and the Owl is a bar, so don’t go crying to Yelp! when your born-after-February-21-1995 ass doesn’t get let in. If that birth window applies to you and you don’t know what any of that stuff above this sentence means, here’s a pretty long documentary about the legendary discoteque and cocaineatorium:

3) The Fairmount Community Library has a free comedy show Saturday night starting at 8pm. I don’t know if any of these comedians actually funny, but I do know the importance of supporting scenes, and scenes don’t exist for long unless there is some genuine cream rising to the top. Will Leslea Bushager, Taylor Vinson, Nick Fields, Darcy Littlefield, Matt Solomon, Allyson Lovell, Mona Del Priore prove to be creamy enough to be stars of the local comedy circuit? You’ll just have to see for yourself, and anyhow, humor is totally subjective, one man’s Whitney Cummings is another man’s “bass-player-matching-the-vocal-tones-of-Angry-Grandpa-as-he-smashes-a-PS4.” I still laugh my ass off at Gallagher’s spelling routine! “EN-YOO-EMM-BEEEE!” Funny shit indeed:

4) The Cush are releasing the vinyl edition of their most recent album Transcendental Heatwave at Three Links in Dallas on Saturday. Boy do I write that time of prepositionally heavy sentence a lot! But for all you “vinyl junkies,” I think scoring a copy of that album on wax will tickle your record-geeking dopamine receptors in a really great way, and if that’s not enough to get you to Deep Ellum, the recently revamped Bummer Vacation and hard-charging party rockers Duell are on the bill as well. The only thing that could make this a better deal is if the damn TRE ran between Dallas and Fort Worth until like 2:30 am. Seriously, officials who are the gatekeepers of North Texas mass transit, wtf is up with that? There is a sizeable number of potential TRE users who stay up later than that race-against-the-clock, last-train-to-Fort-Worth departure time when the light rail shuts down. How many DWIs and accidents could be avoided if those drunks could’ve staggered into a seat and passed out until the train arrives at T&P station? I’m sure there’s some reasonable explanation that I, as an uniformed layperson and not a municipally employed super-genius, have no chance of possibly understanding, but c’mon! Riding the train to and from Dallas would be way more useful to me if it didn’t adhere to the same bedtime I had when I was ten years old. Here’s a video for the Cush on KXT from last year. Show is 18+, $8, and starts at 9pm with Duell:

5) Going to that show at Three Links Saturday night? You should get an early dinner (maybe 6pm?) on Greenville and stop by Good Records, where they will be distributing free beer in honor of the Wire Nest/Tidals 7-inch split. Both groups will be performing, with DJ Maurizio Merli spinning Marilyn Manson mashups or whatever in between the live music. The show starts at 8, and I bet Duell doesn’t go on until 10pm at Three Links, so you can pack in some really great local acts at two venues in one night, and then not have to go to Dallas for like another six months or something, if you feel as if going to Dallas is a cultural chore of sorts. This is a video of Wire Nest: