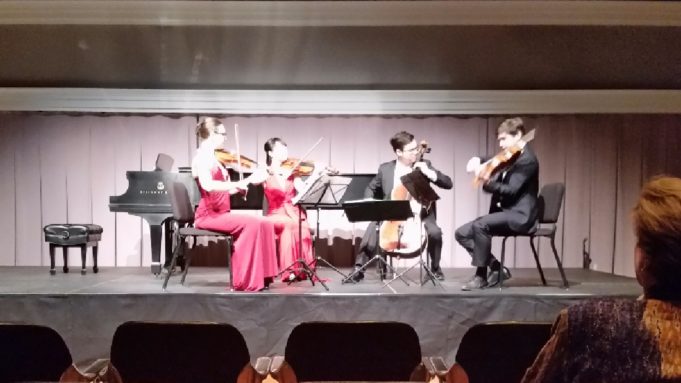 The aim of the Van Cliburn Foundation’s festival series –– to examine different perspectives in music –– is broad. The first iteration last May exclusively featured works by Nineteenth-Century Polish expat Frédéric Chopin. For pianophiles, it was akin to a Grateful Dead reunion. This year, the festival’s focus is squarely on the influence American folk, blues, and jazz music had (and still holds) on composers here and abroad. Fittingly, the opening night at Van Cliburn Recital Hall was themed “Americana.”

The first half of the program leaned heavily toward the weightier, academic vein of classical music. Samuel Barber’s picturesque Excursions was performed by pianist Henry Kramer. The opening movement, marked poco allegro, was a lively rendition of urban life portrayed through sound. While maintaining an intoxicatingly dreamy baseline, Kramer parried his way through a dizzying series of passages with all the alacrity of an athlete. If anything was lacking from the second movement (“In slow blues tempo”) it was more due to the shortcomings of the composer. Barber wrote that jazz is not really “supposed to be edifying. You listen to jazz with feet or snapping fingers, not really so much the ear.” The historical snub notwithstanding, Kramer’s treatment of the pulse leant a rhapsodic feel that elevated the movement beyond the score. The pianist’s performance of the finale didn’t shy away from accentuating dense harmonies while avoiding sounding brash.

Composer Tom Cipullo’s Late Summer (performed by soprano Ava Pine and pianist Kate Stevens) is based on poems by William Heyen, Emily Dickinson, and Stanley Kunitz. While the piano score may be more palatable for Fort Worth audiences than the angular harmonies of Cipullo’s Glory Denied, the work’s charm came through largely thanks to the vocalists. Pine, whose operatic experience is extensive, lent a compelling theatrical element to her already gorgeous voice. An uneasy smile juxtaposed with an often mournful tone created a tense edge to the opening work, “Crickets.”

Baritone Jonathan Beyer, violist Nathan Schram, and Kramer ended the first half with “Come Up From the Fields, Father,” by contemporary American composer Richard Danielpour. The dirge tells the story of the arrival of a letter informing a rural family that their only son has died. Schram’s lamentful solo set the tone for the sombre work. Beyer’s voice was eager and breathy as he belted the first lines, “Come up from the fields father, here’s a letter from our Pete.” The heavy work, while effective, left several audience members looking forward to the brighter selections of the second half.

Pine opened with Aaron Copland’s “Simple Gifts,” with Stevens once again at the piano. The soprano didn’t oversell the iconic folk tune, allowing for the story to shine just as brightly as her voice. Her vocals took on a warmer, velvety hue for “The Little Horses.” Beyer showed he was far from the “park and bark” school of singing with a lively and joyous performance of “Zion’s Walls.” And the duo’s onstage chemistry was palpable in the love ballad “At the River.”

The young musicians of the Attacca String Quartet (violinist Amy Schroeder, violinist Keiko Tokunaga, violist Nathan Schram, and cellist Andrew Yee) ended the evening with “String Quartet no. 12” by Antonín Dvořák. The ensemble hit the ground running with a lively rendition of the opening theme. Throughout the work, Schroeder and Yee traded solos while their colleagues maintained the harmonic and often orchestral sounding backdrop. The pairing sometimes seemed lopsided in favor or Yee, though, whose foot stomping, high-intensity performance left his colleagues appearing subdued by comparison. Of all the ensemble’s good qualities, timing may be their best attribute. They were as synchronized as a well-made Swiss watch.