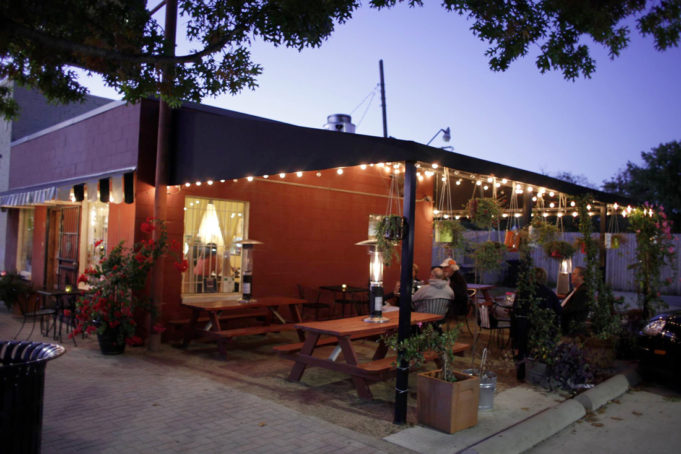 On a normal weekend morning, I imagine the Nonna folks get there around 10 a.m. to set up for lunch service and leave around 11 p.m. after close. That’s when Black Market Chef Evan Williams, Head Baker Giovanna White, and the rest of their crew pop in to set up for after-hours munchies in the tiny, boxy “heart-of-Magnolia” space. By the time Black Market is all cleaned up and ready to bounce around 9 or 10 a.m., Team Nonna is back.

Opening an after-hours eatery near all of the bars and hospitals around Magnolia is also pretty darn inspired. I can’t tell you how many times I’ve thought, “A place that caters to the after-bar crowd would clean up on Magnolia.” I bet 10,000 people will walk by Black Market and claim they had that same idea years ago, back when skinny jeans and ironic mustaches were just beginning to converge on the Near Southside. It’s kind of like how I came up with the idea for searchable images on the internet –– despite not having the expertise, follow-through, or financial backing to actually make it happen.

Williams and White actually did it. But all of their forward thinking means nothing if the food isn’t good. Spoiler alert: It is. Mostly.

I’m not sure if the menu has a cohesive concept. It looks like a disparate collection of things Williams feels like cooking at the time. The offerings change every week, and there’s usually some breakfast-y fare, a few non-egg entrées, and, of course, White’s selection of sweets. The cuisine is also a little on the upscale side, so if you’re looking for toaster hash browns and taquitos, go find a Whataburger.

When I visited last week, my guests and I were the first to arrive –– it’s getting tougher to stay up past midnight these days –– and a few other people trickled in behind us. With just eight people in the room, it felt packed. I’m not sure why the tables are all pushed up against the walls in a U-shape. That seemed to really limit the number of people who could sit comfortably. But we claimed a corner and were prepared to defend it with knives. (BTW, if you anticipate being in a knife-fight, bring your own. The place has only plastic ones.)

My sweet potato hash ($9) with chorizo and goat cheese was a delicious balance of sweet, creamy, and salty. It’s the perfect alcohol-absorbing entrée for the discriminating drunk.

The Goetta ($7.50) –– pinhead oats, beef, and pork cooked down into a terrine –– is a regional dish native to the Cincinnati area. Williams, who is from the Queen City, served his version fried and sliced with homemade raspberry compote. It was also available in sandwich form.

I’m usually not a fan of vegan dishes that pretend to be non-vegan, but the Market’s banh mi ($7), with a black bean quinoa patty, pickled carrots, fresh jalapeño, cucumber, cilantro, and radishes served on house-baked French bread, was exceptional.

The only near miss on my visit was White’s Italian cream cake ($4). The butter-to-everything-else ratio was jarring. It felt like the mixture could have been melted down and used to poach a lobster. The chocolate chip and walnut cookies (75 cents), on the other hand, were warm, gooey, and divine.

It’ll be interesting to see how Nona Tatta and Black Market function as roommates. I wouldn’t be surprised if we start seeing more places do the timeshare thing –– it’s the new food truck.