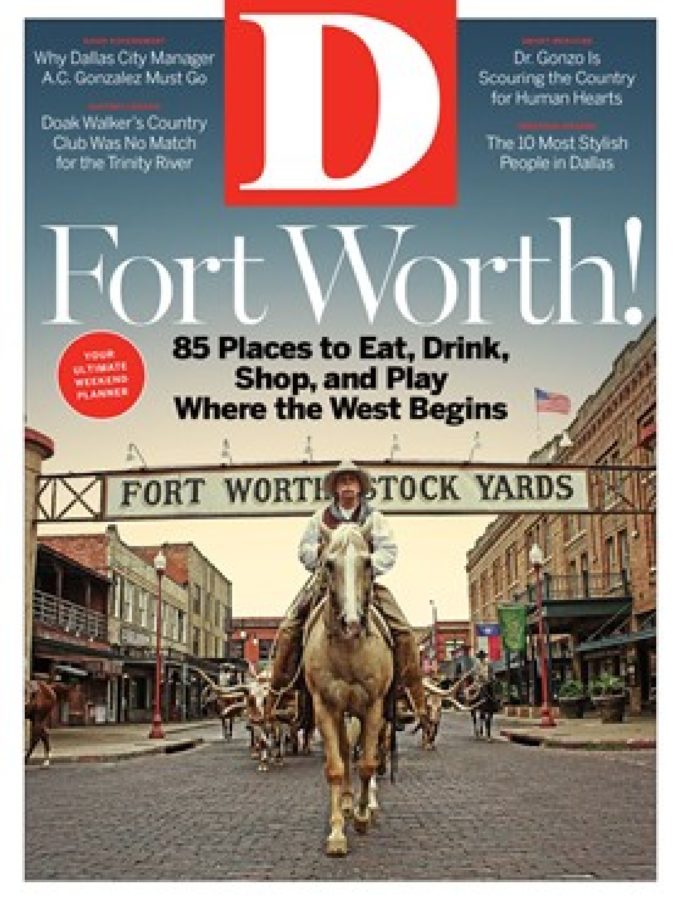 I suppose we should be flattered. The March issue of D Magazine devoted its cover and a ton of friendly ink and images spread out over 12 glossy pages to Fort Worth. But it’s hard to get too excited.  The kiddie-pool depth of research for “Fort Worth Day Trip” feels like the series was a goof rather than an immersion, kind of like describing Harper Lee as a woman who wrote a cute book about a mockingbird.

The headline above the story is unforgivable: “Fort Worth! Where to eat, drink, shop, hike, and kayak in the best little suburb of Dallas.”

The exclamation point is appreciated. The “suburb” crack is not.

Arlington Mayor Richard Greene famously proclaimed, “Arlington is nobody’s damned suburb!” about 20 years ago. News flash: Arlington is a damned suburb. Fort Worth ain’t — it’s the 16th largest city in the United States, ahead of Detroit, Denver, Seattle, Nashville, and so on.

(Side note: Dallas is completely built out and will never get any bigger. Fort Worth has the rights to about 350 square miles of extra-territorial jurisdiction on un-annexed property. This means  Cowtown can physically double in size in the coming years. Dallas is like an adult schnoodle that’s bullying the new puppy, not realizing the little feller is a fast-growing pit bull that will get its toothy retribution one day. In the future, Dallas will be Fort Worth’s suburb.)

Later, the article refers to Fort Worth and Dallas as “sister cities.” Are we a sister or a suburb? I consider Fort Worth to be the stable, dependable big brother. Dallas is the flaky younger sister —  the Blanche DuBois of the Metroplex, pretty from a distance but haggard on closer inspection and obviously coming a bit unhinged between the ears.

The articles are divided into categories: Magnolia Avenue & Near South Side; Cultural District & West 7th; Sundance Square; The Stockyards; and The Best of the Rest.

The Southside section mentions going to The Live Oak for “local music.” I guess anything could be considered “local” since we live in a global community. But anyone who’s spent more than two hours on the Southside knows The Live Oak specializes in traveling acts. Local music is more easily found at Shipping & Receiving, The Boiled Owl Tavern, 1919 Hemphill, and 1912 Club.

And who writes about the West 7th corridor without mentioning Lola’s Saloon, the coolest bar around and the site of so many musically religious experiences? The article mentions that West 7th’s “antiseptic, corporate vibe is undone by anachronistic holdouts and new spots that capture the city’s laid-back, nonchalant Western vibe.”

That was the cue to mention Lola’s and the new Trailer Park.

And if we’re so laid-back and nonchalant, why am I writing this antagonistic rebuttal?

One of the writers mentions “quaffing beer” at Fred’s Café. Sorry, but we don’t say “quaffing” over here. We drink, guzzle, shoot, consume, and use various other methods of swallowing beverages. But we don’t quaff. You have to go to Dallas for that.

D Magazine Editor Tim Rogers used to work at the Fort Worth Star-Telegram, and a handful of his staff members are TCU graduates. The magazine typically tells readers how to enjoy North Texas and so to “overlook Fort Worth is pretty silly,” he told Blotch this morning.

“Enough of us here have made trips to Fort Worth for whatever,” Rogers said. “You forget what a quick trip it is and what a great place it is.”

Is the snarky voice of Dallas staking claim in Cowtown?

“It’s not part of a larger circulation strategy at all; we did beef it up a little for this issue,” he said.

But what about that “suburb” crack?

“There was some of us on staff who wanted to call you guys a suburb on the cover because I knew it would rankle folks in your neck of the woods,” he said. “It’s a joke. It’s meant as a term of love.”

Awwwww! That’s sweet. Fort Worth wants to hug your neck. For a long time. Really hard.