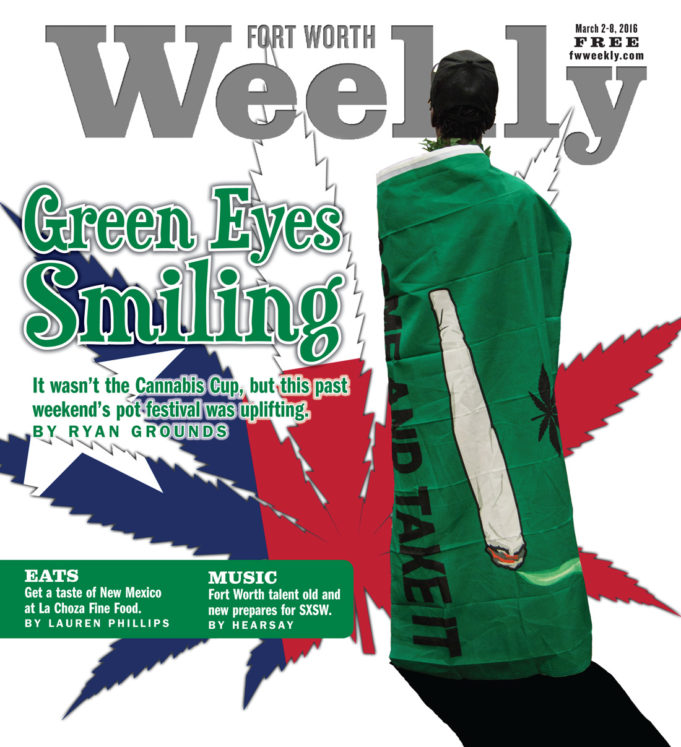 A couple of months ago, after hearing that the second annual Southwest Cannabis Conference and Expo was going to be held in Fort Worth –– Fort Worth! a weed festival in my neck of woods! –– I felt the sun begin to shine a little brighter, the air taste a little sweeter. As a former U.S. Army combat medic who uses cannabis to treat his Post-Traumatic Stress Disorder, I wake up every morning waiting to hear the news that Texas is going to begin the process of legalizing it. The conference, put on by DFW Norml, the local branch of the national nonprofit working toward legalization in all 50 states, is a mix of panel discussions and vendors. The first event, held at the Phoenix Convention Center last October, offered 40 presentations and 200 vendors and attracted more than 2,000 visitors. About the same number showed up to the Fort Worth event, although Sunday’s crowd far outnumbered Saturday’s.

Part of the reason was the high quality of the guests. Dr. Sue Sisley, some former pro football players, and keynote speaker Montel Williams were just some of the celebrities scheduled to talk. My heart soared when I imagined meeting some of the most forward-thinking individuals working toward legalization in Texas today. Please note: The Conference and Expo is not anything like the Cannabis Cup, an annual competition sponsored by High Times, in which attendees get to sample some bud and judge whose is the best. For one thing, the Cup takes place only in states where weed is legal (Alaska, Colorado, Oregon, and Washington). Secondly, while the Southwest Cannabis Conference and Expo is all about marijuana, you’d be more likely to get a buzz at a Wiggles concert than here. Cops are everywhere.

But no buzzes were harshed.

The one discussion I was most excited about was about PTSD research. Presented by Grow for Vets, the panel was advertised as a talk with Sisley, a physician who once worked for the U.S. Department of Veterans Affairs and is fighting for veterans’ rights to treat themselves with marijuana. The mission of Grow for Vets is to help save the more than 50 veterans who die each day from suicide and prescription drug overdose. Grow for Vets provides veterans with safer alternatives to prescription drugs, connecting vets with the knowledge and resources necessary to obtain or grow their own cannabis for treatment of their medical conditions.

But first I had to get inside the convention center. And before that, I had to park.

I found a good spot near the Texas A&M Law School on Commerce Street before embarking on a leisurely stroll. Beneath my old Army shirt, I wore a “I Support Medical Marijuana for PTSD” shirt and on my head an Iraq War veteran baseball cap that my dad had given me last Christmas. Showing my colors, I was proud to walk into the convention center.

I got there a little early –– old Army habits are hard to break, I guess. After picking up my press pass, I thought I’d check out some of the vendors. I was impressed by the professionalism. The organizers seemed to have things well planned out.

If sex sells, and it does, then the marijuana industry is just like every other industry. Beautiful display models were everywhere. Simply by standing there silently, one of them almost “talked” me into buying a $15 white t-shirt that I didn’t need.

Of course, the first thing you saw when you walked inside the building was the small city of vendors. In fact, most of the floor space allocated for the event went to vendors’ booths.

In true military style, I started at the left with the intention of working my way around in an orderly fashion. My goal was to chat up anyone interesting. And “steal” a bunch of free stickers without anyone noticing.

My first stop was a good one. Weedmaps is an ingenious app and website that allows users to locate their nearest source of weed –– in legal states only, of course. One day, hopefully one day soon, we’ll be using Weedmaps to help us Texans find our nearest source of legal THC products.

Marketing geniuses, Weedmaps also had made sure their booth was the first one you saw when you walked in. When I met the photographer for this assignment, I told him, “Meet me at Weedmaps.” This well-placed booth was also one of the largest and friendliest. There were free Weedmaps t-shirts and hats, and there were white couches for lounging, amplified by the comfortable vibe: chill people working the booth and soft music piping from the speakers. On a complimentary computer, I created a Weedmaps profile and picked a free shirt as my thank-you. I also scored a phone lanyard and some cool stickers.

The next noteworthy booth –– Advanced Nutrients, a Canadian company that makes plant food specifically for organic vegetables, including “hippie lettuce” –– was probably the fanciest. Among the rainbow colors all around, stunning models and a mascot, Big Bud, danced around and posed for silly/sexy selfies. And I’m pretty sure Big Bud was also a model. “His” bright green eyes were quite seductive.

This booth also featured a game I remember from the Cannabis Cup. Every visitor was given a pin with the company’s logo on it and a four-digit number. If you located the person with the same pin number as you, then you could go back to the booth and claim $500 in prize money. As you can imagine, it was not uncommon for random strangers to stop you and ask for your button number. I must have looked at more than a thousand numbers, but I did not find my match. However, I will never forget what that button looks like and the company’s logo: “Want big fat sugary buds?” with “Advanced Nutrients” written across a white half pot leaf on a green and purple background.

Next I ran into MagicalButter. Large and outlandish, this booth was loud and fun and full of MagicalButter makers. Sleek chrome machines that resemble campfire coffee pots, they are a way to create herb-infused butter. Each set also came with a silicone glove, which could come in handy if you decide to get high on wax (“High on Wax,” Jan. 6) and need to touch the sappy surface without it sticking to your skin.

The rest of the booths were what I like to call “mom-and-pop” operations, but some of them were interesting. The one that really stuck with me was Rolland Security. Their unique safes include 25 individual drawers that can be opened separately, like a lock box wall at a bank, with several slots for different strains of bud to be kept separate but secure. This booth also had a pretty fun game, in which the attendee picks a number between one and 11 and then checks that numbered drawer for a prize. I picked No. 8 and won a glass jar with a sealable top for holding my, um, oregano.

When I looked up, I saw it was quarter after 10 and that the first speakers had begun. 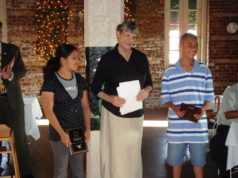