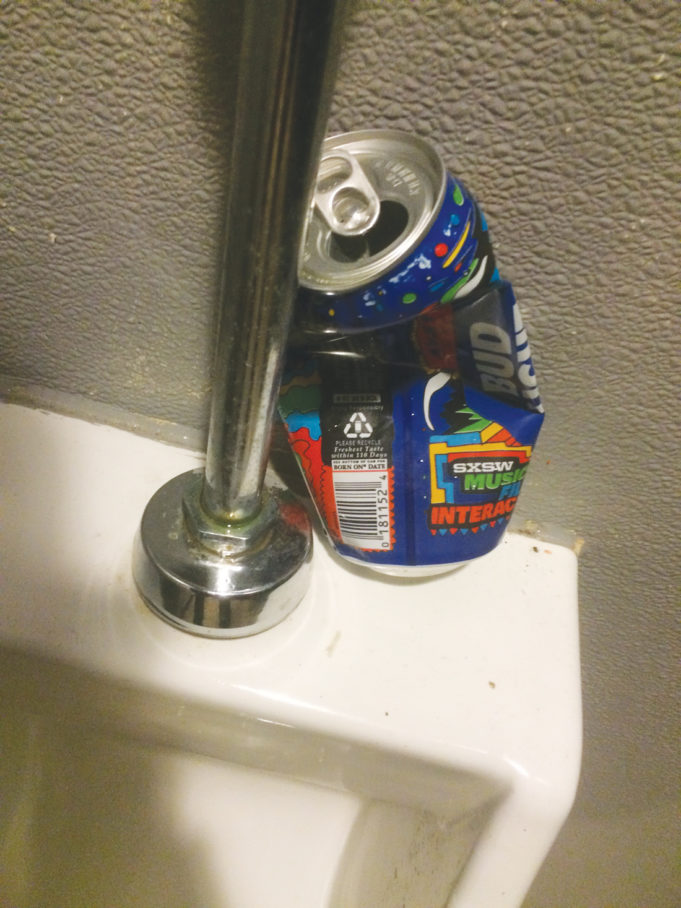 In retrospect, complaining about any part of South by Southwest sounds inordinately whiny. It’s not on par with bitching that the gold leaf on your gold leaf-topped ice cream sundae is oddly shaped but whiny nevertheless. So the rest of this might sound whiny, especially to anyone who thinks wandering around day-drunk without getting arrested is a privilege not to be taken for granted.

Overall, this year’s SXSW trip was one of the best I’ve had, only topped by my first one in 2009, and that’s only because it was my first one, full of hilarious and memorable rookie moves like scrambling to find a place to stay and missing Metallica at Stubb’s because you’re throwing up in an alley. Here’s why it was so good: I had a place to stay, and I had to play only two shows.

To some people, playing a show, let alone multiple shows at SXSW, is a bonus of living the rock ’n’ roll dream, a sense that a band is on the up-and-up, in a spot to be noticed by someone who can make its members experience the height of a real feel-good Cinderella story. But here’s what happens most of the time when you play SXSW.

You take off work. You drive down to Austin, maybe in a van, more likely in a caravan, hopefully leaving with enough time to make your 2:05–2:22 p.m. set time at a place called Pizza & Ranch or HOTDOG or whatever-the-fuck ultra-Austiny name it has. You make good time to Austin, but because the Chuckling Pig or Punchy McIrish’s that you’re playing is on 6th Street, you have to either get lucky and move fast for a parking spot (watch out for pedestrians –– these bloggers act like they’re playing Frogger lol!) or wash out into the clockwise circle of hell that takes you down to 4th street if you’re fortunate and San Antonio if you’re not. That circuit leads to another chance to drive up and down 5th and 7th streets hoping a space opens up. Eventually, you find a way to block traffic long enough to unload all your crap and then lug it all through an alley and a kitchen onto a stage, where five people will watch you in front of 10 other people sitting down drinking beers and looking at their phones.

While you bang through your ridiculously shortened set to a handful of people inside this bar, thousands more amble back and forth outside, oblivious to the fact that you’ve driven many miles for no money to cart expensive equipment through slimy alleys onto tiny stages. Those people are oblivious because they are outside enjoying life, rather than inside wondering where you’re going to be able to set your amp after you play. 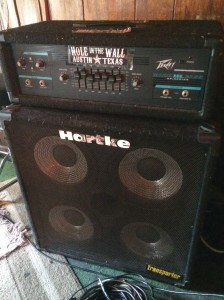 I’m exaggerating, of course. The alleys aren’t always slimy, and sometimes there are 100 people sitting down drinking beer and not watching your band. But this year, one of my shows with Oil Boom was on Guadalupe near UT, at a place called the Hole in the Wall. Being comparatively far away, the amount of SXSW-related garbage (the crowds, the cops, and literal refuse generated by so many Spotify House flyers) was a lot less. Plus, there was a parking lot nearby that was only $10 to park for 11 hours.

The best part about leaving your car somewhere for 11 hours is that you can drink for at least five of those. I got started on this task immediately. We were about two hours early for our slot, so I was fast and loose by the time we took the stage –– of the three bands preceding us, the best by far was a hard rock trio of sisters from Dayton, Ohio, called Good English, and Oil Boom had to bring it, or at least look like we were having a good time. That part was easy, especially because the Hole in the Wall had a bass amp backlined, meaning I didn’t have to unload anything but my guitar, which also meant I didn’t have to be sober enough to carry anything later.

I took a nap in my car, and then myself and the other Oil Boom guys –– guitarist Ryan Taylor, drummer Dugan Connors, and guitarist Jordan Richardson –– ate some Japanese food and wandered about. I’d eaten a 7-11 hotdog prior to this and smoked a bunch of weed, so I don’t remember the rest of this very much at all, but I knew enough to quit drinking by the time we split up and Jordan and I went to the Mohawk. At the Mohawk, we watched a bunch of rappers. I didn’t really pay attention because I realized my car was towable at 1:30 a.m., and that it had also been sitting around unattended and full of amps and guitars for 10 hours. Just so you know, the walk from the Mohawk to the Hole in the Wall only takes about 30 minutes.

Ryan and Dugan stayed with Ryan’s uncle north of Austin. Jordan and I stayed with our friend Brian and his girlfriend Danielle at their place about 20 minutes south of town. Brian used to play drums in Son of Stan (Jordan’s band) and is now a sous chef for a downtown restaurant, and he made some really awesome chili and breakfast tacos. But more than that, he eliminated the anxiety of having to find a place to stay.

Friday, Jordan had a DJ gig at an Eastside convenience store called Mr. MC’s. I tagged along, spun a few records, and split at 4:30 p.m. to go to the Lost Well, a few miles north. Madison, WI sludge metal kings Bongzilla were playing at 6 p.m., and I refused to let anything cause me to miss them. I ended up leaving my car over there all day long, which was good, because a person who doesn’t smoke weed all day before and after seeing a band called Bongzilla seems like weirdo. I am not a weirdo.

The shows I saw on Friday were bookended by Bongzilla and Thee Oh Sees, notable “garage rock” band from L.A. While they are two wildly different rock bands, I came to the conclusion that they (along with San Diego’s Earthless) are the only rock bands anyone ever needs to see, simply because they have distilled its basic elements into their elemental power. Bongzilla’s fuzzed out riffs fall like boulders, while the same from Thee Oh Sees barrels out of the amps like cars racing off a cliff. If we’re being honest, I took some mushrooms during Thee Oh Sees, so they were extra awesome.

Saturday, I ditched the car so far west on 6th street it was near a cross street called Western. And I walked that whole fucking strip all the way past what I like to call the Parking Lot of Dreams at I-35 and 6th and over to the Eastside bars, where I saw a procession of dudes promoting some trap rapper, the last of which made to wear a P.A. speaker, blasting the rapper’s music. Jordan and I wandered back, missed Pearl Earl at the Blind Pig, linked up with Sam Anderson of the Quaker City Nighthawks and went to see them play at a place whose name I forget but reminded me of the Viper Room. A couple of hours later, the usual 6th street gig nightmare unfolded, except there was some British band’s manager standing in the way of me unloading my gear. The show ended. We loaded up, leaving the club at about 3 a.m. We went to Taco Cabana, where we waited an hour to eat. The end. 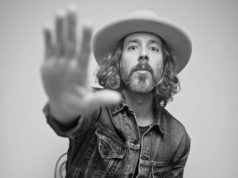 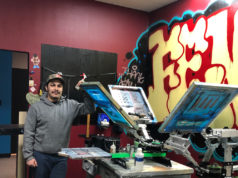