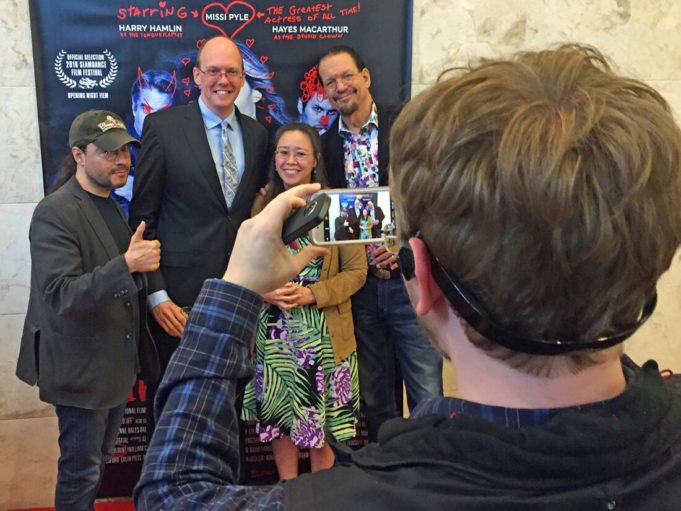 Director Adam Rifkin and writer/performer Penn Jillette needed their film “Director’s Cut” to be more than a movie. In fact, they needed it to be two movies on the screen, and a great deal more off it.

Media is more interactive than it has ever been. As consumers control the flow of what they watch, listen to, and read, they increasingly break the fourth wall. They can engage not only with the story they’ve chosen to watch but with the process and environment that created it. And, thanks to social media and other technology, they can participate in it at unprecedented levels.

“It was the idea is that everything is becoming so meta and everything is becoming so mashup. Wouldn’t it be really terrific to do a movie where they took all sorts of disparate media and threw it together and made a movie that was really one of passion,” Jillette noted during a question-and-answer session following Friday’s screening of the film at Plano’s Angelika Film Center. 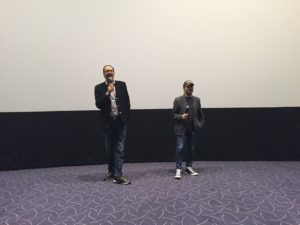 “Everybody is becoming more and more aware of things like mashups (and) fan edits. It’s something that’s actually been popular in music for a long time, where people will sample things from other songs and create a completely new piece of music from components of other music. But I’d never seen it done with a movie before,” Rifkin said. “This movie exists entirely because of new media.”

They held the screening, complete with red carpet, for the film’s “producers,” aka anyone who had contributed to the FundAnything “Make Penn Bad” campaign. Jillette and Rifkin had to fund it that way, partially because major studios didn’t bite on the film’s unique premise, but also because crowdfunding figures so heavily into their story that it almost wouldn’t have seemed right to do it another way. 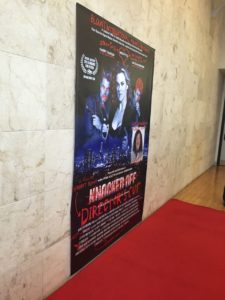 “We pretty early on figured out this would be difficult movie to get funded in the traditional way. So Penn was the first one to suggest crowdfunding,” Rifkin said.

Jillette’s wife Emily administered much of the effort, which raised more than a million dollars. She attended the screening as well, and when a patron asked whether they might consider crowdfunding a future movie, the mother of two quickly interjected a decisive “no.”

The darkish comedy’s plot revolves around a character named Herbert Blount played by Penn Jillette.  The crew of a movie called “Knocked Off” allows the creepy, yet amiable, galoot (Rifkin called him a “sympathetic monster”) on the set by virtue of his sizable contributions to their crowdfunding campaign. Blount has an unhealthy obsession with Knocked Off’s female lead, Missi Pyle (playing herself in Director’s Cut), and the demented amateur filmmaker decides he will make his own version of the movie in which he will co-star with her. He steals their footage to go with what he’s shot himself on set, kidnaps Pyle, and sets about playing director.

The trick is that the entire movie you see when you watch Director’s Cut is Blount’s film, with the character’s DVD-style director’s commentary as narration throughout. Pristine images shot with a high-end Red Epic camera, ostensibly for the “Knocked Off” film, sit side-by-side with the clips Blount would have done himself, for which they used a prosumer camera, GoPros, and phone cams. To make it all work, they had to obsess over continuity.

Penn Jillette believes they got it right.

“There is not one frame of that movie or one line of that movie that isn’t completely justified that Herbie could have gotten ahold of the footage,” he said.

That’s not to say there aren’t a few moments to make you think about the world beyond the film. If you are a fan of Penn Jillette, the real-life performer, you may find it ironic when the avowed atheist’s character is thrown off track by Mormon missionaries or when his famously muted partner Teller delivers some deviant lines in a twisted cameo. The idea for the film came from Jillette’s creative brain after he became fascinated by directors’ commentary features.

“You trust that person to actually be in control,” Penn Jillette said. “I thought how kind of creepy and interesting it would be to give yourself over to someone in the director’s commentary that was actually crazy, who actually did not make the movie.”

He originally conceived it some ten years ago, before raising money from the masses took hold. Crowdfunding ended up not only helping him make the movie, but helping it make sense as well.

“I had his movie that I loved the script, but I put Herbie on the set by having him be a pizza delivery guy and work in craft services and it was always the weakest part of the script. It was really hard to justify,” Penn Jillette told a questioner. “Then we decided the movie had to be crowdfunded. We went through and did that rewrite and all of a sudden, the whole movie came together. So now, it’s very clear that, money aside, the movie could not have been made without crowdfunding.” 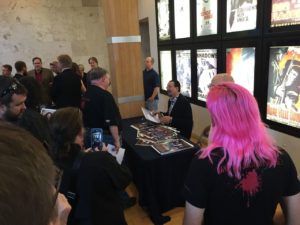 Anyone could contribute to the fundraising effort, and a diverse group attended the screening, which was held in North Texas because a funder named Randy Pitchford made the largest single payment among the 5,000-plus contributors. Attendees wore everything from David Bowie t-shirts to tuxedos. People in business suits mingled with fanboys. We saw pink hair, turquoise hair, and, of course, Penn Jillette’s notorious red fingernail. He and Rifkin have done a number of appearances related to the movie, and many of their crowdfunders have visited the set and the editing room. The newcomers’ presence became an asset for the filmmakers beyond the monetary contributions the fans made to get themselves there.

“By showing the cut so many times to so many people who came in, the cut got so much better so much quicker,” said Rifkin. “A lot of the people who came in for Boot Camp (the project’s name for crowdfunded edit session visits) had great ideas that you see in the movie. They’re incorporated into the film.” 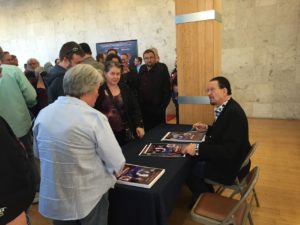 At one point in the film, we see Blount has a painting of Missi Pyle hanging on the wall of his home (they reached out to their funders to crowdsource the painting). Given the film’s premise, one could wonder if a Herbert Blount copycat, with a painting of Penn Jillette on her wall, might have contributed to Director’s Cut.

“Of our almost 6,000 crowdfunders, there are a couple real-life Herbert Blounts. They’re not scary like the real Herbert Biount, but they’re a little HerbertBlountish,” said Rifkin. “We were never actually scared anything was going to happen, We just laughed. It was kind of funny. There were a couple very enthusiastic fans who have become very much a part of the experience for us.”

Having successfully funded and created their motion picture, Jillette and Rifkin premiered it at the Slamdance Film Festival in Park City, Utah, which Rifkin said had to add additional screenings to accommodate demand. They now want to make it available for more than just their fellow filmmakers.

“We’re screening it on the festival circuit, traveling the world with it,” said Rifkin. “Because it’s an unusual film, it’s a tough sell, because distributors don’t necessarily know the easiest way to sell it. So we’re trying to build buzz, build attention, get the word out there, showing it at a bunch of festivals in hopes that it will start to find its audience and a distributor will realize that and take it on. And, additionally, we’re trying to think of out-of-the-box ways to get it out as well.

Securing distribution for any film has its challenges, even one helmed by a public figure like Penn Jillette. During their Plano Q&A, the duo suggested to their fans that the filmmakers were open to ideas on how to get the movie released. That approach would seem logical – it would come as no surprise if a crowdfunded film that riffs on crowdfunding succeeded thanks to a crowdsourced distribution idea.