I recently had a great conversation with sculptor Bernardo Vallarino over beers at Lola’s Saloon about artist Doris Salcedo. We were two of about 400 people, mostly artists and other art professionals, who saw the Colombian-born sculptor speak last week at one of the events surrounding the inaugural Nasher Prize (which she won) from the Nasher Sculpture Center in Dallas.

Born in Santa Barbara, California and raised in Bogota, Colombia, Vallarino shares both Salcedo’s city of birth and approach to art about political violence. Vallarino’s work is smaller in scale, usually tiny figures or delicate butterfly wings that respond to violence and death. It was therefore not surprising that he was very curious about the artist’s motivations and process and was one of the first in line during the Q&A that followed.

“As an artist, you know, we keep something in the back of our minds when we’re making art,” he recalled. “My question was basically about, what do you think? Is your mind in the past or the future? Her answer was that in order to move to the future, you have to remember the past.”

I could tell that he wasn’t satisfied with her answer. Vallerino is an MFA candidate at Texas Woman’s University, and his thesis is largely based on Salcedo’s work, which grapples with violence.

Vallarino commented on this shared identity as an inescapable part of who he is as an artist.

“No matter what we do, I think somehow we’re going to end up hitting on those things in our work.”

One Child, one of the sculptures Vallarino featured in a past exhibition titled “Between Dying and Death,” is a little girl’s dress made of butterflies, and he describes it as a work created using Salcedo as a guide. While both artists tackle political violence in their works, they don’t have the same approach.

“We as artists have this responsibility of asking questions that other people are not willing to ask and answer those questions,” he said. “I feel that responsibility as well. The other thing is this idea of the object being a memorial, a way of remembering individuals who have passed. Even though I show a lot of violent acts in my work, something she wouldn’t do, they are made with a certain care.”

Vallarino recognized this shift in the understanding of his own work through his focus on Salcedo’s.  He talked about conversations and criticisms of his sculptures as being too clean, lacking looseness or signs of the visceral nature of his subject matter. And although he didn’t realize it at the time, it clicked when he came to understand Salcedo’s approach to her subject.

“When I started studying and saw her theory behind making sure that artwork [about the dead] is respectful of the dead by the quality of the work you’re producing, it automatically clicked. Automatically! That’s the reason my work is that way.”

Doris Salcedo’s exhibition Plegaria Muda (in loose translation “silent prayer”) is on view at the Nasher Sculpture Center  through April 17. You can chat with Bernardo Vallarino at his opening reception for Un-Human at the Fort Worth Community Arts Center this Friday, April 8, from 6-8 p.m. 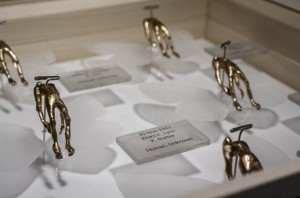 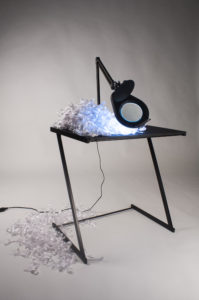 Here is a piece from Doris Salcedo’s exhibition, courtesy of the Nasher: 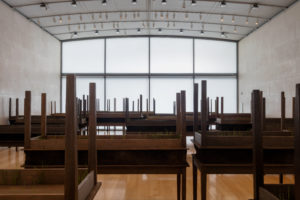 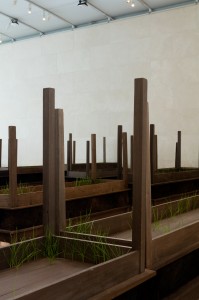