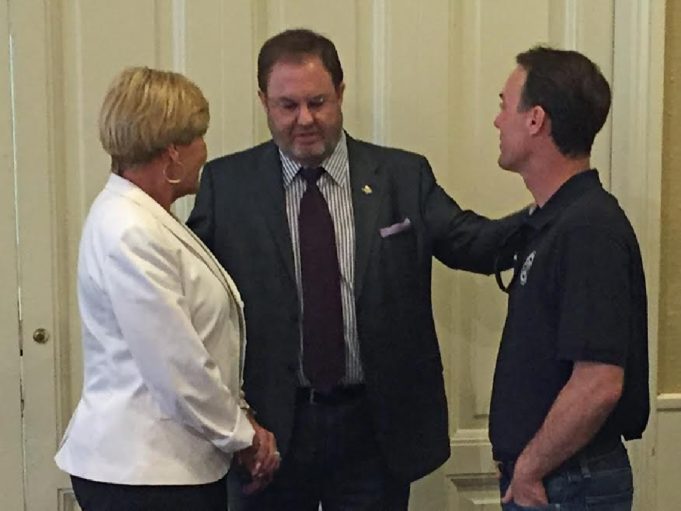 Sports are supposed to be fun, but since the aim is to win, a competitor also has to take certain aspects of them seriously to realize his or her goals. One has to find the right balance between intensity and remembering it’s just a game.

I thought about such aspects of sport while observing NASCAR personalities this week. Driver Kevin Harvick and Texas Motor Speedway President Eddie Gossage both attended the Fort Worth CVB’s Sports Huddle luncheon at the Fort Worth Club. NBC-5’s Newy Scruggs moderated a discussion with the duo, but the sportscaster largely got to save his voice for his on-air work. Harvick and Gossage had no problem carrying the discussion, and the most entertaining parts came from their back-and-forth banter.

Much of the jabber revolved around Harvick’s failure to win a top-tier race at Texas Motor Speedway. He has twice finished as high as second in the track’s Sprint Cup event and has won five Xfinity Series races and a Camping World Truck Series contest.

Scruggs:  Eddie, if he likes you, he has some little way of messing with you a little bit. I think all of us who have been around him know that. Kevin, I know Eddie likes to hit you with the fact that, hey, Victory Lane is open for you for the Sprint Cup series. It’s been open for you for the truck . . .

Harvick: At some point (after winning a TMS Sprint Cup race), I’m going to park my car outside on pit road and I’m just going to go home. It’s so normal for me to not be there at this particular point, I figure what the hell, might as well just not even visit it. If we take the checkered flag, do we get disqualified if we don’t show up to Victory Lane? I’m going straight upstairs to champagne toast.

Gossage: You want the cowboy hat and the six shooters, don’t you? Then get your little heinie in there.

Gossage went on to explain how he revisits his running joke at least twice yearly, incorporating his track’s traditional winner’s reward of revolver fire and a Charlie 1 Horse lid.

Gossage: I always cross paths with him (Harvick) somewhere on race day and I always say to him, “Hey, you know we’ve got a Victory Lane after this one, too, and I’ve got a hat and six shooters that’ll fit you if you want it. Just come in and get hot when it’s over.”

Harvick: I don’t think he’s ever going to invite me to any more events if we ever win because he won’t have anything left to . . .

Gossage : I’ll have no material.

Gossage : Don’t tick him off. He’ll hit me, I’ve seen that stuff before, too. Let’s talk about Richmond. You and Ricky Rudd . . .

Both men have occasionally created controversy for themselves by reacting passionately to perceived slights. They referenced an incident from 2003 with the now-retired Ricky Rudd, but it has not been uncommon for Harvick to get crossways with his competition.

Gossage’s own flow of ideas seems to run without a restrictor plate. Scruggs’ opening remarks included a jab at Gossage’s penchant for writing letters to media members to chide them for insufficient coverage of his facility and his sport. Gossage acknowledged the correspondence, defended it, and even referenced it later on, along with other entanglements to which he’d contributed.

Both men admitted they sometimes let their emotions get the better of them, but they also didn’t mind poking fun at themselves for it. It struck me that in a general sense, that’s what we desire from our sports figures. We want them to be intense in competition, trying to win as hard as possible, but also maintaining a sense of fun and lacking pretension. Come to think of it, we like those qualities in a co-worker, too. You want someone who truly cares about his or her job but is also pleasant to share an office with.

As someone who made his living creating TV spots that often required sports figures (who were also co-workers) to perform in a goofy manner, I really learned to appreciate people who didn’t take themselves too seriously. When a Derek Holland was happy to make fun of his own mustache (in two languages) or a Mike Modano didn’t mind pretending he couldn’t get a date, it made my job a lot easier. And our marketing team would never have done those spots if we didn’t think self-deprecating humor helped fans feel more comfortable with those players. We all generally prefer to associate with people who don’t seem full of themselves.

I don’t truly know at all if either Kevin Harvick or Eddie Gossage are good guys or bad guys or in between. I have interacted with Harvick once by asking a question in a gaggle of media. I have now met Gossage once, and that was Thursday. He was friendly, thanked me for a question I asked during the media Q&A, and made a fairly standard radio host joke based on my first name. Because I hope to not take myself too seriously, I laughed at the Limbaugh quip and added some lame rejoinder.

General unpretentiousness doesn’t excuse specific incidents, so if Harvick or Gossage have been in the wrong in the past or end up there in the future, we must still hold them accountable. They improve such situations, however, with contrition and by making fun of their own shortcomings.

Harvick came up short this past weekend, finishing tenth in the Duck Commander 500. We can only hope he continues to keep his perspective about the result when someone brings it up, because TMS hosts another Sprint Cup race this fall and we can be fairly sure someone will. After all, it’s some of Eddie Gossage’s best material.