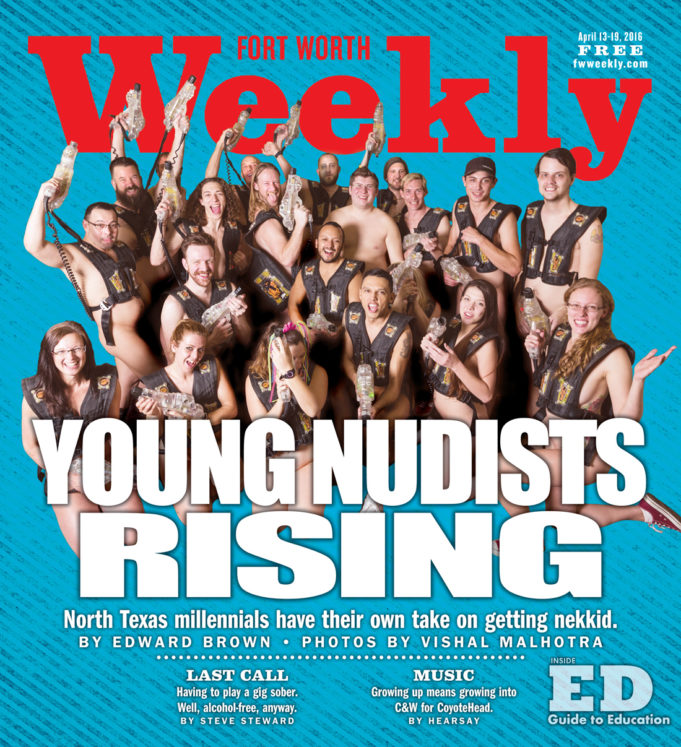 I pulled up to the strip mall at the predetermined meeting time of midnight. All but one of the Mid-Cities area retail spaces was dark. That’s where I was headed. Inside, about 20 people, most in their 20s and 30s, were chatting casually. I kept wondering how well I was hiding my jitters.

The space was huge, with a high ceiling and fluorescent  lighting. It could have been a big box store at one point. I tried to make small talk as best I could, but I knew this wasn’t going to be like any game of laser tag I had ever played before.

After about 10 minutes, a dark-complected guy with an athletic build gathered everyone around. He told us not to post pictures or check in on social media in a way that would reveal our location. “We want to make sure we’re invited back,” he said.

As soon as he stopped, everyone began stripping –– right before they started strapping on laser tag gear. Someone quipped that, while laser tag is cool, paintball probably wouldn’t be any fun for nudists.

The laser taggers were members of a new local social group. The idea behind Young Nudists of Texas United, or YNOTU (as in “Why Not You?”), is simple: Plan fun recreational events and do them in the buff. In only two years, membership has grown from the three co-founders to about 30. And that number doesn’t include non-members, who are welcome to any YNOTU event and who sometimes, co-founder Jose Salas said, outnumber the members.

YNOTU is also getting legs, as the saying goes. Along with helping run the Young Nudist Leaders Summit, a national conference that will be held at Bluebonnet Nudist Park in Alvord, Texas, July 29-31, the local group is considering helping young nudists in Austin, Houston, and Waco launch their own YNOTU chapters.

Salas is excited about the growth and the possibility of starting chapters outside North Texas, noting that people from as far away as California and Florida have attended YNOTU events.

While the group is getting more attention than ever, he said it’s important for YNOTU to maintain control of the growth.

“We want to make sure people and venues get to know what we, and nudism, are really about,” he said, before its ideas are spread hundreds of miles away.

I know what you’re thinking: These people are just a bunch of swingers. Actually, they aren’t. And never have been. Most nudist groups in the United States have not been or are not sexual in nature.

One young woman who asked to remain anonymous said she was skeptical when her boyfriend asked her to join him at a YNOTU event not too long ago.

“This group sounded like it was sexual,” she said. “But they were doing things normal people would do in private like playing pool or having a pool party. If you go to a nudist event seeking to swing, it would be considered offensive. Nudism is about acceptance of others. It empowers people.”

So far, YNOTU hasn’t had any major problems, Salas said, and if there is a scofflaw, he or she simply will be kicked out and not invited back.

YNOTU also is apolitical, unlike some popular similar groups, especially Free the Nipple, a movement created to destigmatize the public display of female breasts.

“YNOTU stays out of politics so we can be as inclusive as possible,” Lopez said.

Despite its straitlaced, middle-of-the-road essence, YNOTU is thriving. The Young Nudist Leaders Summit is one of only several large shindigs that YNOTU is either organizing or promoting. On Saturday, June 13, Salas is also heading up the 2016 World Naked Bike Ride-Austin, a clothing-optional event promoting people-powered transportation and positive body image, and leading up to the summit will be the Third Annual Nude Games, also at Bluebonnet Nudist Park, a day of flag football, yoga, sand volleyball (ouch!), and more, all nude.

YNOTU’s popularity and rapid growth have placed it at a crossroads of sorts. With frequent visitors from Austin, Houston, Waco, and elsewhere seeking their own chapters, Salas and the two other co-founders, Chris Lopez and Amanda (who asked to remain anonymous), must decide if they want loosely affiliated chapters or to formally incorporate as a nonprofit. The advantage of becoming a nonprofit, said member Alan (who asked to remain anonymous), is that it would allow them to revoke chapters whose members do not adhere to YNOTU etiquette and rules.

“Obviously, the goal is to have both men and women,” he said. “We know young women don’t want to be creeped out or approached by every male at our event.”

Plus, he added, most of YNOTU’s events happen at nudist resorts that are “family friendly,” meaning that open sexual acts are prohibited.

“I don’t have a firm consensus,” co-founder Lopez said, “but I’ve noticed that my female friends in my generation are more open [to nudism] than my male friends. With the older generation, it was the women who were more timid. Younger women tend to be more open now, but they won’t participate unless their significant other attends events with them.”