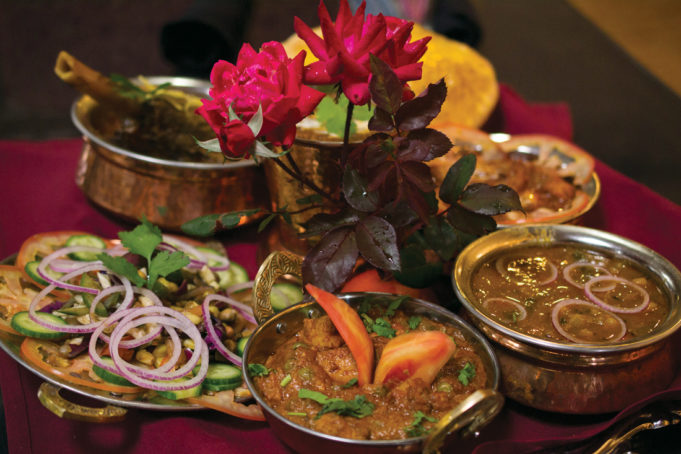 For foodies, the idea of popping into the nearest Radisson hotel for a bite is likely to be somewhat anathema. Even in the culinary blight of Fort Worth’s south I-35 corridor, most of us, if pushed on the question, would prefer a quick stop at Whataburger or Waffle House before getting back on the road and heading somewhere — anywhere — else.

Certainly it’s an unlikely location for a destination restaurant specializing in the Mughlai and Kashmiri cuisines of Northern India. My guest and I arrived at Route 66 Indian Restaurant on a recent Saturday night with plenty of curious skepticism in tow. The little restaurant at the back of a very large and empty lobby is creating quite the buzz, but you wouldn’t know it to look at the place. There’s no décor to speak of, and the ambience is about as bland as it gets. To the uninitiated, Route 66 appears to be nothing more than a generic food dispensary of the sort frequented by less discriminating travelers.

As we made our way to the dining room, however, an unmistakable perfume of spices wafted from the kitchen. Comforting but exotic, the intense smell was the only evidence needed to prove we were in the right place.

Owner Navid Rashid has assembled a brigade of international cooks under the direction of his executive, Chef Q, to prepare a classical Indian menu with a focus on freshness and authenticity. The selection features a variety of lamb and chicken dishes, but my guest and I decided to make a meal of the kitchen’s vegetarian offerings, which comprise nearly half the menu.

Our samosa appetizers arrived quickly, fragrant golden brown pastries stuffed with delicately spiced potatoes and peas. The crust was thin and crispy, a marked improvement over heavier, greasier wrappers found at some other Indian restaurants. Instead of tasting fried dough, the flavor of toasted coriander and cumin took center stage, offset by the zest of fresh mint chutney.

Our entrées were presented in a trio of hammered-metal dishes on a copper tray. In a tall flute was the kitchen’s dal Bukhara, a slow-braised dish of black gram, stewed with ginger and tomatoes until the beans had fallen apart. Eaten with perfectly charred naan, the little beans could have been a meal in themselves, satisfying and complex.

Steamed under a bread crust was the subz dum biryani, a dish from Southern India that combined fresh vegetables with basmati rice and spices. Poking through the crusty lid released a pillar of steam that had the green, floral scent of a garden.

Our third entrée was a subz nizami handi, a vegetable medley similar to navratan korma, but simmered in a sauce of cashew cream and curry. The kitchen staffers are committed to never using frozen vegetables, and it makes a noticeable difference in the vibrancy of the dishes. There was a real sense that meatless dishes at Route 66 are given the same respect as those featuring lamb or chicken.

Meat, by the way, is sourced locally and halal, and Chef Q is passionate about selecting his animals — most of whom he gets to meet before they are slaughtered.

I returned a few days later to try out the lunch buffet, and I was pleased to find that the selection of dishes offered were almost (if not quite) as fresh and wonderful as those cooked to order during dinner service. The stewed lamb in a brown sauce was tender and rich. The chicken tikka, thigh meat marinated in a yogurt masala, was tangy and bright. Along with several curried vegetable dishes and hot onion fritters, the buffet made for an excellent sampling of the kitchen’s talents. Having naan brought freshly scorched from the tandoor oven (rather than being left to wilt in a chafing dish on the buffet) made all the difference in the world.

The young staff pulls double-duty, as Route 66 is the hotel’s only restaurant. At one point, my guest had taken an especially assertive bite of chile and had to wait for a water refill — the server on-duty had gone to deliver a room service order. Whatever the service staffers lacked in polish, though, they more than made up for in sincerity and enthusiasm. They seemed genuinely happy to be there, and it was easy to forgive any oversights.

Route 66 has, undoubtedly, a quirkiness to it. Even the name evokes a strain of Americana that seems, at first, completely out of step with the menu. On the other hand, Route 66 is an ambitious start-up of passionate young talent that delivers where it counts. There’s nothing more American than that.