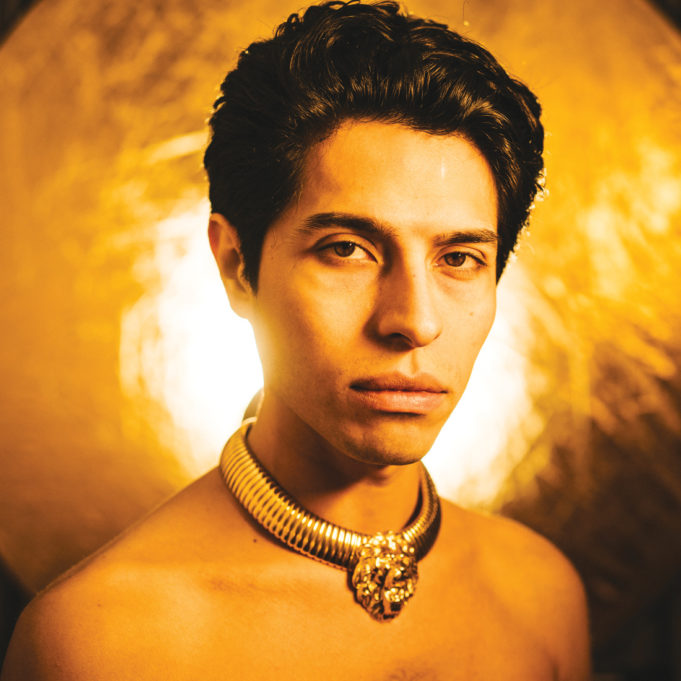 A text saying, “I’m on my way!” hits my phone as Neon Indian’s 2010 anthem “Deadbeat Summer” starts playing in a coffee shop on Lower Greenville where I am awaiting the arrival of Ronnie Heart. Five years ago, the 30-year-old left Denton’s chillwave ambassadors just as frontman Alan Palomo began working on material for a second album. Heart decided to concentrate on his own music, so the timing of the text syncing with the song felt like more than simple coincidence.

A half-decade has passed since Ronald Gierhart decided to adopt the moniker Ronnie Heart for his solo project. After playing countless shows, DJ sets, and dance parties, he finally released his first physical album earlier this month.

The resulting five-song EP, you(r) mine, is a hip-gyrating rocket traveling at light speed, navigating through the past and future sounds of dance music. Equal parts funk, R&B, rock, and disco, Heart’s most common comparison, both musically and stylistically, is a certain purple-clad maestro from Minnesota –– a parallel Heart has mostly embraced.

“I have always cared about fashion and style,” Heart said. “And as I started putting together the live show and playing out, people started mentioning him to me. It was strange at first, because I had never thought of Prince during the creation of this album. I just love funky, jazzy, Quincy Jones-style production, and that’s what I was going for. I still don’t know if I take it in a positive or negative way, but I love Prince, and it would be false to deny his influence on me.”

With the help of producer James Talambas (whose New Media Recordings label also released the EP), Heart recorded the album off and on over the past few years, playing every instrument himself, save for some assistance from a few of his pals, most notably guitarist Austin Jenkins (Leon Bridges, White Denim) and saxophonist Jeff Dazey (Leon Bridges, Dazey Chain).

“Austin playing the guitar solo on ‘Groovitate’ came together simply because I had an idea what I wanted it to sound like but didn’t quite have the skill at the moment to produce,” Heart said. “So when I met him and realized he went to Berklee [College of Music] and had the skills and muscle memory to recreate what I wanted, I knew he would be perfect.”

The EP’s release isn’t the only major event Heart has experienced in the first third of 2016. The longtime resident of Fort Worth’s Fairmount neighborhood moved to Dallas in January. The move was designed to allow him to focus his energy on the promotion of the album.

“Living a block away from [West] Magnolia [Avenue], it was always easy to just fall into a rut of going out,” he said. “I always had multiple to-do lists and was constantly trying to do 10 things at once. Now I am more of a recluse. I have narrowed down the things I need to do, and it is easier to prioritize.”

The move to Dallas will also allow Heart to expand some of the creative outlets he became known for in Fort Worth. His Sparkle Tunnel parties at Shipping & Receiving Bar and The Wherehouse that featured hand-picked musical and visual artists may very well continue on the east side of the Trinity. After five years teaching at the School of Rock campus in Fort Worth, he has begun giving guitar lessons at the company’s Dallas location.

Heart is still working out his plan for promoting the record, but he knows that testing all of the country’s major markets is a priority. A full-scale tour will likely happen in the near future, he said. He continues writing and recording music for a follow-up LP. Collaborations with many artists are also in the works, one of which will feature Fort Worth’s glitchwerks king Squanto.

“I had Rickey [Wayne Kinney, a.k.a. Squanto] send me some beats,” Heart said. “I really want to have a song with him. It may not be a Ronnie Heart song, because now it’s taking a life of its own, but it is going to be something.”