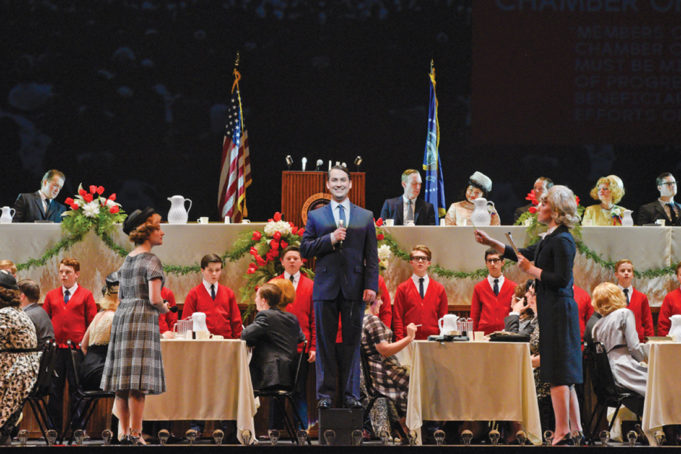 As crowds piled into Bass Performance Hall last weekend, young men and women wearing cardigans, sharp suits with thin ties, box dresses, and other mainstream ’60s attire handed out red-white-and-blue election buttons with “JFK World Premiere” on them. At the foot of the main stairwell inside, a middle-aged man in a suit stood behind a presidential podium and boomed, “Ask not what your country can do for you …,” “… but because they are hard,” and other famous quotes from the 35th U.S. president, all with a crack Boston accent.

For the world premiere of JFK, Fort Worth Opera’s $1.3 million commission, the preshow pomp and circumstance could have been seen as part of the company’s larger mission: to make opera not so staid. To relax it, to make it seem as mainstream as baseball and apple pie. And based on the nearly three-hour production, Fort Worth Opera believes that the artform also isn’t limited to: powerful man and powerful woman fall in love, they are separated by larger forces, the fat lady sings. Blending historical fact with multiple digressions into fantasy, JFK proved to be a fresh reexamining of a well-known public tragedy.

The opera unfolds in one day — Jack and Jackie’s visit to Fort Worth on November 21, 1963. Summarizing the plot is difficult. Librettist Royce Vavrek augmented the first family’s stop by creating extended dream sequences that account for the entire middle of the two-part opera. The phantasmagorical episodes bring Jack (tenor Matthew Worth) into contact with his sister Rosemary (soprano Cree Carrico), Soviet Union Premier Nikita Khrushchev (tenor Casey Finnigan), and a very folksy Vice-President Lyndon Johnson (bass-baritone Daniel Okulitch). Interwoven into the story are several touching duets between Jack and Jackie (mezzo-soprano Daniela Mack) that are set against the backdrop of Jack’s frequent use of, and possible addiction to, morphine and Jackie’s anguish over the recent loss of her infant son Patrick. That’s a long way of saying that the libretto covers a lot. Possibly too much.

Spoiler alert: The star of the show isn’t really the most powerful man on Earth at the time. While most of the dream sequences unfolded from the president’s perspective, Jackie’s inner torment and resilience were what tied the work together. In addition to being the central figure in the first and last thirds of JFK, Jackie was given the most solo arias (three).

The couple’s relationship, well known for its troubles, was portrayed in a tender light. Indeed, the opera’s most touching scenes revolved around the two tormented souls whose inner thoughts hark back to simpler times in their marriage.

The show opened with a singularly captivating scene. A bright green neon sign reading, “TEXAS” enveloped the entire space above the front stage. Soon after, audiences were introduced to the focus of most of the opera — a massive rotating stage. The platform, designed by director Thaddeus Strassberger, was partitioned into four equally sized rooms: two bedrooms, a bathroom, and a living room.

As the prologue ended and Part One began, Mack, wearing a white nightgown, peered toward the audience through window blinds. The scene was the Hotel Texas, where the Kennedys spent their last night before their fateful November 22 visit to Dallas. The song that followed, “Midnight Is the Loneliest Hour,” may have been JFK’s weakest number. Mack, who gave commanding performances throughout the show, attacked the opening lines. Her bravura, however well-intentioned, contradicted the intimate text, which centered on imagery of sleeping animals in the Stockyards and internal laments.

The opera alternated between bombastic scenes and softer-toned arias and duets. There were several moments that brought the audience to riotous laughter, like when Johnson scolded a member of his entourage for pulling out a harmonica during the hoedown-inspired ditty “Gotta Git Ya Saddled Up.” The joke was a welcome break from the overall heaviness.

The work’s most powerful and soul crushingly gorgeous moment occurred toward the end of Part Two. As Jack was speaking at a breakfast banquet in the hotel’s ballroom downstairs, the first lady, still in her bedroom, was preparing to don the iconic pink Chanel dress that she wore to Dallas. She was joined by an apparition, a much older Jackie Onassis (mezzo-soprano Katharine Goeldner), who helps dress Mack. Composer David Little demonstrated his orchestral wizardry in rendering a lamenting acoustic backgrop to the drama that enriched the action onstage and did not detract from it.

Set to a slow-tempo orchestral dirge, Mack rendered “I have a rendezvous” with a blend of anguish and defiance in her warm-hued voice. Bending tones in the string section and countermelodies by oboes painted a sonic world of beauty and darkness.

For the past 50 years, possibly no tragedy has been mulled over in the American consciousness more than that of President Kennedy’s assassination.

The recent premiere of JFK is a reminder that there is still room for fresh perspectives and even reevaluations of the iconic president.