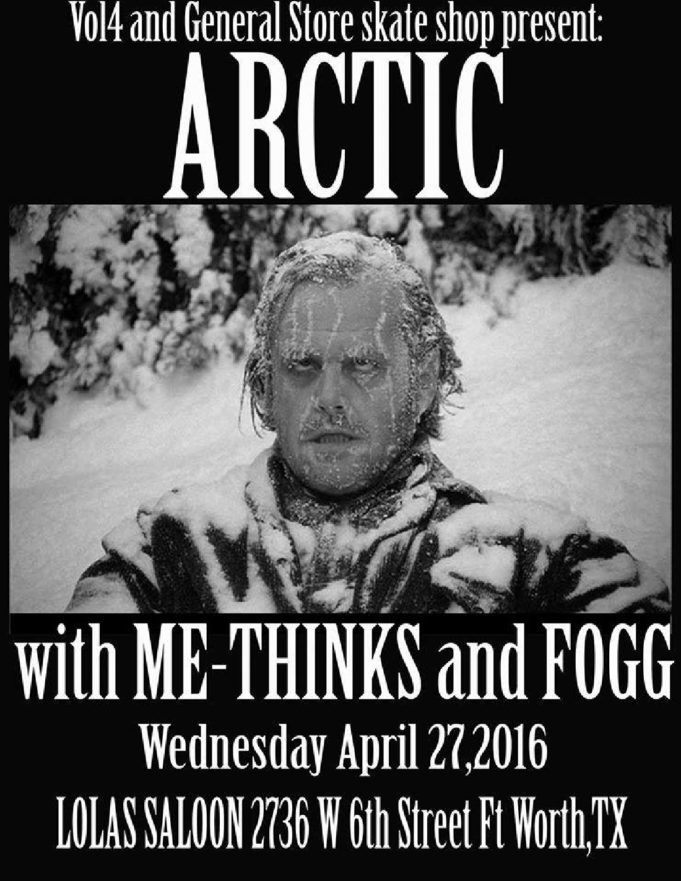 1) If you skate, you already know about this show: on Wednesday, Oklahoma-born skate legend Don “Nuge” Nguyen is going to be at the Vol. 4 Skate Team signing at the General Store skate shop in Keller (136 S Main St.), after which his band, Arctic, will be headlining a heavy bill at Lola’s Saloon. The Me-Thinks, Haltom City’s long-reigning lords of power chords are direct support, and Love-worshipping heavy psych trio FOGG open the show. The Vol. 4 shindig starts at 4, and the doors to the show at Lola’s open at 8. The cover is a reasonable amount of money, probably close to or the same as other shows you’ve been to at Lola’s. This CCS video about Nuge and Arctic is only 47 seconds, so I apologize if you have to sit through some pre-roll ad that’s twice as long. “Internet: You Get What You Pay For!”

2) Randy and Mr. Lahey from Trailer Park Boys are doing a show at The Rail Club Thursday night (and Friday night, too). As far as I understand it, the show is not the actors who portray them doing standup bits, but the actual characters being their gloriously terrible, Canadian white-trash selves. Tickets are $20 on Prekindle, so they’re probably more at the door, though with the online ticketing service fee, wouldn’t you say it’s close to even? Anyway, here’s a clip of Randy and Mr. Lahey live if you have no idea what show I’m talking about:

3) This isn’t a show, though it features a local musician and takes place at a bar that has hosted live music Tyrel Choat, of Addnerim and the Cosmic Trigger fame, will be throwing his birthday party at the Moon Tower (2811 S Cherry Ln.) Friday night, and he’s bringing his collection of vintage arcade games to the bar and setting them on free-play. A couple are MAMEs, so there are like 64 games in each of them. The fact that 30 years later, you can put an entire Tilt’s-worth of games into a single cabinet still amazes me. It also depresses me, but that’s more of a subject for an Instagram account to explore. Tyrel made this video detailing what he’ll be schlepping up to the bar:

4) I know Denton is kind of far (especially if you get lost and take I-35 E home), but the show at Dan’s Silverleaf (103 Industrial) on Friday night is a three-band bill that’s worth the drive. Each band has is releasing a new album: psychedelic prog jammers Ababacaba headline, and they’re dropping their debut album on a Dallas Distortion cassette and self-released CD. Dallas’ stoner surf rockers (can I call that surfadelic?) The Aquaholics are releasing their new self-titled vinyl albums, and Denton power trio the Infamists are dropping the brand new second LP, The Thrill of the Hunt. They start the show at 10pm. Cover is $7. Here’s Abacaba playing at Brookhaven College:

5) This is on Saturday, so it’s down here at the bottom, but Team to Beat Show of the Week alert goes to Girls Rock Fest at Happi Haus (1921 Hemphill St.). The 15 band benefit show is raising money for Girls Rock Camp, a summer camp endeavoring to teach little girls empowerment through the power of playing in bands. The donation cover is only $10, though anyone under 17 gets in free. Further donations get you vegan-friendly bean tostadas (with a beef option, per the invite copy), as well as sodas, water, or beers for 21+. Looking at the lineup, there are a lot of names I’ve never heard of, so the show is obviously great opportunity for you to catch some new bands. But local music fans will likely recognize names like Bitch Bricks (at 3:40 pm), Sam Lao (at 5:55 pm), Rachel Gollay (9:35 pm), and Alexandra Rhea and Maria Demus (11:15 pm). Girls Rock Fest gets rolling at 2:15 with Nina Ty.  The final band, Denton’s THIN SKIN, play at 12:40; this video’s a great introduction: