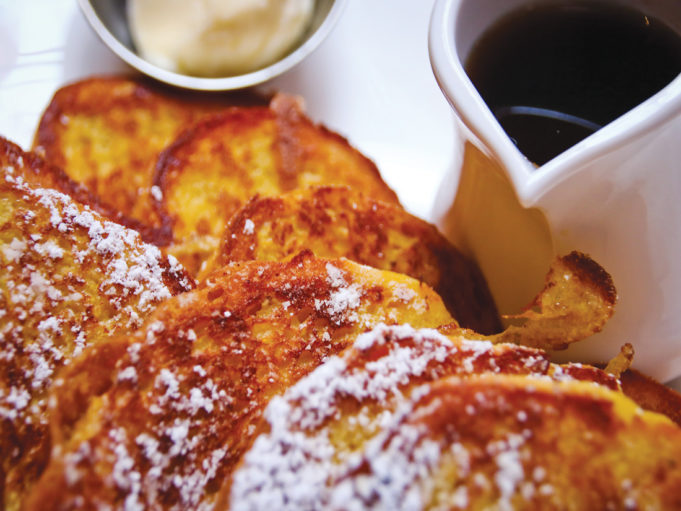 If you’ve lived in or worked around downtown Fort Worth for at least a decade, you may feel nostalgic when a new restaurant opens –– odds are good the new joint is built on the metaphorical gravesite of someplace you used to like. Yolk, the Midwest-based chain with several locations in the Chicago area and Indiana, now occupies the address in Sundance Square vacated by Cowtown Diner and, before that, La Madeleine Country French Café. The little jog down Memory Lane is interesting if only to compare what the new restaurateurs have done to the space. The lovely original brick columns are still there from the La Madeleine days, but the place is currently decorated in relentlessly cheerful, diner-style bright yellow, blue, and white. (This is de rigueur for the brand, apparently).

On the Monday morning my guest and I visited, it took us a good 10 minutes to ponder the menu –– a diverse selection of diner-style favorites (a five-egg omelet containing enough cholesterol for three people) combined with some hipster-healthy options (kale, quinoa), sandwiches, and salads.

The French toast made with challah was sweet and not too eggy or gooey, with a minimal hint of cinnamon. There were six halved slices, and a person with a normal-sized appetite could probably have eaten only half of that. The accompanying hickory-smoked bacon was almost perfect –– crisp without being overdone and a little chewy without being too fatty.

The pot roast eggs Benedict, singled out on the menu as a staff favorite, started with two English muffin halves topped with tender, palm-sized slabs of beef instead of ham, flawlessly soft-cooked eggs, and a thin Hollandaise sauce. The meat had a silken texture but not much flavor, while the sauce had a lot of flavor but was scarce. The breakfast plates included a generous selection of fresh fruit –– pineapple slices, grapes, and melons. Because the fruit wasn’t in a separate dish, much of the Hollandaise-covered egg yolk tasted like pineapple.

On the lunch side of the menu, the Yacht Club showed all the signs of a potentially great club sandwich: a mixture of meats, more of the bacon we liked with breakfast, and cheese all piled in between sourdough bread. The “sourdough” ended up being toasted plain white bread, which was fine. Inexplicably, the kitchen staff puts shredded cheddar cheese on the sammy, not slices. As a result, a lot of the cheese ended up on the plate or down my shirt. The accompanying side of coleslaw tasted zesty and peppery, with the perfect amount of mayonnaise binder.

The Tour de France was listed on the menu as three pieces of breakfast breads: banana nut, lemon poppy seed, and sweet orange bread. We ordered this to go in lieu of dessert and only later realized that the bread was actually French toast. The subtly sweet, soft banana nut bread with its accompanying peanut butter spread and sliced bananas disappeared first. The orange bread came with a sweet-tart orange-strawberry dipping sauce, but the whole combo was just too much sugar to handle at once. The lemon bread was served with blueberries, and the delicate citrusy cake didn’t need much else.

The service was attentive without being pushy. We never fully emptied our drinks before they were refilled, and the portion sizes were ridiculously large. There’s a sweet story on the restaurant’s website about Yolk.owner Taki Kastanis growing up at his family’s diners, doing his homework nightly in a diner booth. With his success in the Chicagoland area, plainly his business model is solid. The question is: Would you travel to Sundance Square for breakfast, bypassing Esperanza’s Bakery and Café, Paris Coffee Shop, or the venerable Montgomery Street Café? It’s a tough call. 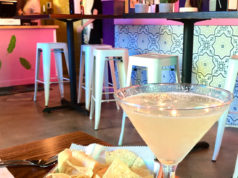