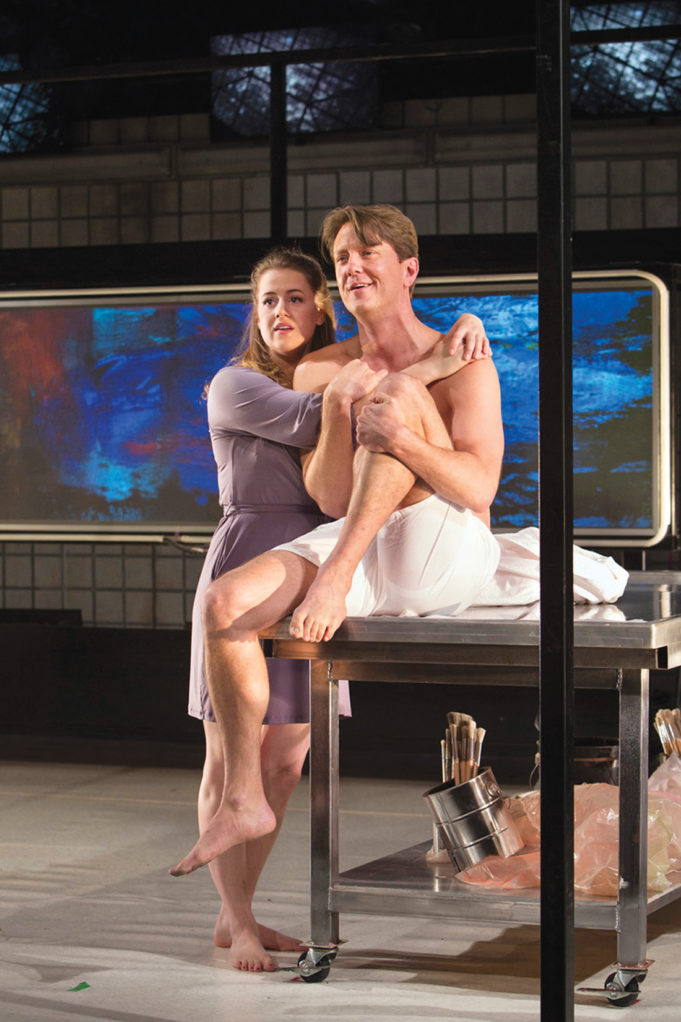 Horror is particularly hard to do on the stage. A theater director doesn’t have the editing tricks and CGI available to filmmakers, nor can he or she allow the viewer’s imagination to fill in details the way a prose writer can. For all the death and bloodshed that you find in the operatic repertoire, operas seldom venture into outright horror, though a good production of Britten’s The Turn of the Screw can keep you up at night. Hoping to add to the tradition are the creators of Buried Alive and Embedded>, the two one-act operas based on Edgar Allan Poe stories and commissioned for the author’s 2009 bicentennial. They received their world premieres together in North Dakota two years ago. They play in Fort Worth as part of the opera festival, and they illustrate the pitfalls and rewards of adapting the short story writer to the medium.

The less successful opera proves to be Buried Alive, an extensively updated version of “The Premature Burial.” Poe’s paranoid narrator has been turned into a mentally unstable modern-day artist named Victor (Christopher Burchett) who believes he’s sinking into the large abstract canvas he’s creating and fears he’ll be, uh, interred while still breathing. Unlike Poe’s protagonist, Victor finds his worst nightmare indeed coming true. The best thing here is Burchett, who has a handsome, oaky baritone voice and spends most of the opera wearing only his boxer shorts and looks fine in them.

Unfortunately, he’s stuck in a rickety vehicle. Quincy Long’s libretto is full of portentous sentiments that don’t really mean anything (kind of like Poe at his worst), and Jeffrey Myers’ lushly discordant music wears out its welcome before this work’s 37 minutes are up. The opera opens with a gravedigger (Nathan Stark) singing an arietta as he works, and director Lawrence Edelson makes the puzzling decision to have him sit by the stage and witness the following scenes even when they’re taking place in an apartment or a mental hospital. The production uses 12 video monitors above the stage, but the only time they add anything is when a malevolently staring eye emerges from the big screen on the stage that represents Victor’s painting. The piece has other scattered moments of inspiration, too, like the comic trio for the undertaker and her two assistants preparing to embalm Victor’s still-living body.

Both operas utilize the same cast of six singers, with the workload evenly distributed so that performers with large roles in one piece have smaller roles in the other. Embedded is updated from “The Cask of Amontillado,” and it proves to be a nice star turn for soprano Caroline Worra. Relegated to a bit part in Buried Alive, here she plays aging TV news anchor Sylvia Maloy, who sees a younger, prettier colleague (Maren Weinberger) angling for her job. Sylvia’s the equivalent of Poe’s Fortunato, and her Montresor (Stark) is a terrorist leader who tempts her with an exclusive interview instead of a barrel of dry sherry.

Composer Patrick Soluri has actual experience composing music for TV news programs, so it’s no surprise that he slips into the idiom easily. He also comes up with the inspired touch of setting music to the GPS instructions that Sylvia receives in her car as she drives to the meeting point. (The GPS system is sung by Anna Laurenzo.) He’s aided by librettist Deborah Brevoort (whose play The Women of Lockerbie was produced at TCU two months ago), who comes up with some piquant observations for her heroine who isn’t taking the onset of middle age lightly: “Take years off, take years off, that’s what women have to do!” There’s also a bit where Montresor muses about the name of fino sherry that’s etymologically wrong but clever nonetheless.

Worra does well enough by the contemplative material in the beginning, but it’s when Sylvia realizes she’s in a trap that she (and conductor Tyson Deaton) really shines. Not only does she keep up with the music’s high tessitura as the heroine sees death closing in on her, she also portrays Sylvia’s presence of mind as she turns the situation to score one last victory over both Montresor and the twilight of her journalism career. It’s this performance that concludes the evening on a triumphant note.