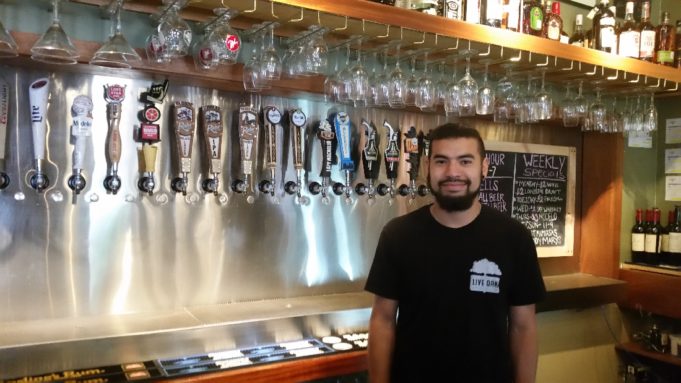 Earlier this week, a good friend of mine posted on Facebook that the term “gastropub” reminded him more of a stomach abnormality than an eating establishment that does food and beer well. I was nonplussed, partly because I hadn’t known the moniker was controversial and mostly because I was guilty of using the description dozens of times (gasp) in print.

In my defense, no one who commented on the thread could offer a good replacement. “Beer-restaurant” was the best suggestion I heard. The point of my diatribe is that I haven’t blogged about gastropubs in a while. Lying somewhere between restaurants and breweries, gastropubs occupy an important space in the craft beer movement.

Fort Worth has some great restaurants that fit the bill: Bearded Lady, Flying Saucer Draught Emporium, World Of Beer, and Pouring Glory, among others. I stopped by the Live Oak Music Hall to chat up a bartender and see what life is like at the beer-centric restaurant. First and foremost, the establishment is a music hall, one of the best in Fort Worth. But the Near Southside music venue has long had a vast selection of craft suds on tap and an impressive menu of Americana favorites.

Bartender Jose Arellano chuckled at the mention of a “gastropub” controversy. It’s a funny word, he said, but it definitely works. Not every restaurant serves a wide selection of craft brews, and not every pub does food well.

Arellano has faced a fairly steep learning curve since joining the Live Oak several months ago.

“This is my first bartending job,” he said.

Possibly the hardest task has been learning how to make the complex cocktails that Fairmount residents are apt to order. The beer, he added, hasn’t been as much of a struggle.

“I’ve been homebrewing for a while,” he said.

“When we get a new beer we’re given specs on it like ABV and IBUs,” he said. “And, of course, we sample all the beers. We get a lot of requests for beer mixes like the strawberry blond, a mix of the Rahr Blonde and Red, or the dirty blonde, the Rahr Ugly Pug mixed with the blonde.

For the craft beer unwashed, Arellano asks a simple question: “Do you prefer a light or dark/heavy beer?”

He then offers the customer a few samples until the right beer can be honed in on.

“If you like dark beer, I’d probably give a sample of the Lakewood Temptress, [Martin House] Bockslider, or a porter,” he said.  “Better to have a drink you like than just guess at it.”

Whether for a show, cocktail, beer, or food, the Live Oak remains one of my favorite beer-restaurants, er, gastropubs.