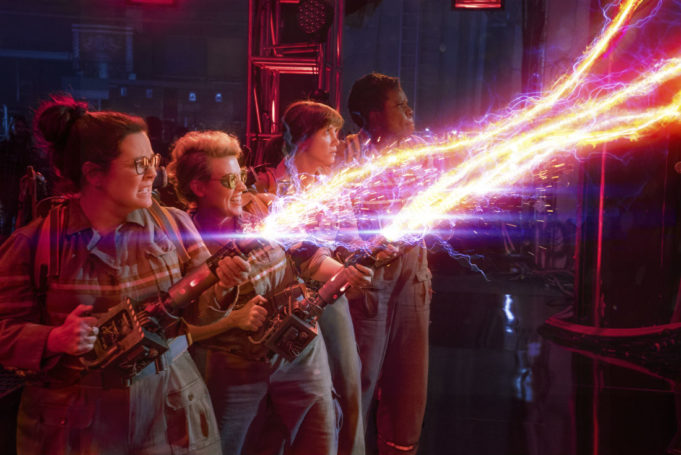 Over the past year or so, a lot of hysterical men succeeded in making me ashamed of my own gender over the new reboot of Ghostbusters that opened this past weekend. (They’re still out there, too, artificially depressing the audience scores on IMDb and Fandango and other sites that give out fan ratings.) For their sake even more than my own, I would have loved this new version to be as awesome as the well-merited advance hype promised. I therefore say through gritted teeth that this new film doesn’t have the same number of laughs per square inch as either Bridesmaids or Spy, two movies with the same talent. However, it is quite a bit of fun.

This new version wipes the events of the 1985 Ghostbusters off the timeline. Instead, it starts with Columbia physics professor Erin Gilbert (Kristen Wiig) having her shot at tenure derailed by her former best friend Abby Yates (Melissa McCarthy), who has set up shop at a community college investigating paranormal activity. They’re both thrown out of work at the same time as they’re called to a historical mansion in New York and see a ghost themselves for the first time. They decide to go into business just when they’re needed, because a bullied hotel bellhop (played by former Saturday Night Live writer Neil Casey) is looking to take over the world by leading a ghost army.

The movie does cast Bill Murray, Dan Aykroyd, Sigourney Weaver, Ernie Hudson, and Annie Potts in small roles that are not the ones they played in the original films. I really could have used a bit of Murray’s Peter Venkman and the whole “this business is ridiculous” vibe that he threw off in the first movie. The main issue with this version is that it casts Wiig and McCarthy as the straitlaced leaders of the new Ghostbusters, which suits neither of these brilliant comediennes. McCarthy at least gets a brief interlude when a ghost takes possession of her body, but she can’t squeeze too much out of the lame running gag where Abby argues with the Chinese restaurant delivery guy (Karan Soni) over how many wontons she’s getting in her soup. Wiig is given even less comic business here. I blame this on the PG-13 rating and director Paul Feig and screenwriter Katie Dippold, who collaborated on The Heat (not one of my favorites).

Better stuff comes from the other half of the team. Leslie Jones fires off some good gags as an MTA employee who joins up and brings encyclopedic knowledge of New York history to the squad, and she stars in a bit at a heavy metal concert where she gets a gargoyle-looking ghost perched on her shoulders. Most of the opportunities for comic weirdness fall to Kate McKinnon as the Ghostbusters’ tech genius, and she seizes her chance, delivering her lines in an undertone and giving her role an edge of psychopathic glee at the amount of destruction her newest gadgets can cause. As one of her fellow Ghostbusters remarks, she’s scarier than some of the evil spirits they face. McKinnon steals this movie, as does Chris Hemsworth as a hilarious dim bulb of a receptionist whom the ladies hire.

Given Hollywood’s addiction to remakes and the brand-recognition that they bring, flipping genders with these things is a simple and elegant idea with many different advantages. The new Ghostbusters isn’t earth-shaking, which unfortunately seems to be what it’ll take to make the movie studios see sense about gender equity. Still, as either an effects-heavy comedy or a laugh-heavy sci-fi thriller, this is better than much of what I’ve seen this summer.