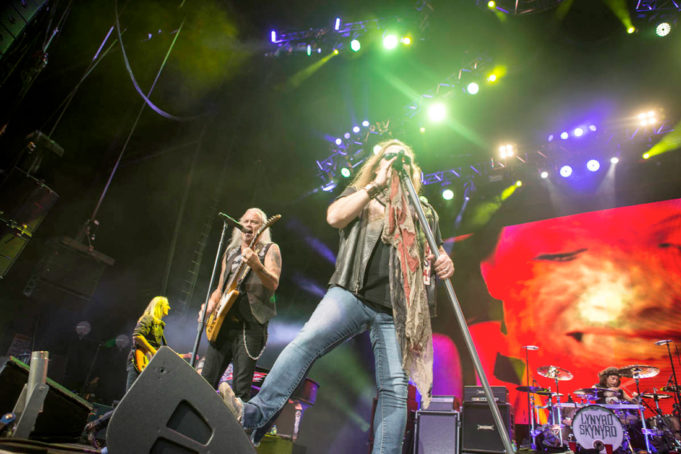 They simply did not make sense. The same twangy rockers who in song either absolved themselves of the reign of closeted Imperial Wizard George Wallace or endorsed him were the same musicians who, in another tune, crowned a poor old black man as “the finest picker to ever play the blues.” So, Mr. Skynyrd. Which side of the political divide are you on, exactly?

In the 1970s, during Lynyrd Skynyrd’s height of popularity, there was no real way to pin down the loudly implied political allegiances of frontman/lyricist Ronnie Van Zant and company. When pressed, however, you might have blurted out, “right wing.” “Sweet Home Alabama” and all that.

The popular notion is that Lynyrd Skynyrd in its original all-white, all-male, all-Florida incarnation is anathema, to every minority group and every educated white male on the planet, in outer space, and yet born. The supporting evidence isn’t good. The rebel flag that backdropped concerts, the alleged offstage feud between Van Zant and Saint Neil Young, “Sweet Little Missy” –– Lynyrd Skynyrd cannot be confused philosophically, or musically, with Woody Guthrie or even the superficially fempowering Spice Girls.

But listen a little more closely.

“Hand guns are made for killin’,” Van Zant sings on the unqualified 1975 jam “Saturday Night Special,” with its jazzily skipping snare during the chorus and growling, stuttering axes. “Ain’t good for nothin’ else.”

And for blue-collar kids growing up in the 1970s and early ’80s, there was no more damning indictment of desperately anticipated adult freedom than “That Smell.”

“So take another toke,” Van Zant scoffs. “Have a blow for your nose / One more drink, fool, will drown youuuuu.”

The Lynyrd Skynrd we’re talking about went extinct a few decades ago, after the 1977 plane crash that killed Van Zant, newly added guitarist/singer Steve Gaines, backup singer Cassie Gaines, assistant road manager Dean Kilpatrick, pilot Walter McCreary, and co-pilot William Gray. A version of the band continued on, and another version is currently touring the States, stopping by Choctaw Casinos on Saturday, after having put out a studio album in 2012 and a live recording last year. The new Skynyrd, now with only one remaining original member, lead guitarist Gary Rossington, is just as politically outspoken as the original incarnation but is, invariably and undisputedly, right of center. Perhaps to the great consternation of Ronnie Van Zant’s ghost.

Not long after the release of the band’s debut album, (Pronounced ‘Lĕh-’nérd ‘Skin-’nérd), in 1973, Ronnie Van Zant and the boys were co-opted by the right, their conscription no doubt hastened along by the Confeddie flag imagery for which Lynyrd Skynyrd may still be known. Rossington has said that his and his bandmates’ label, MCA, wouldn’t promote them until they offered up the Stars and Bars as a “marketing gimmick.”

But let’s not tell our friends and family members about that.

Texas is definitely red but by only a few percentage points, according to a 2015 Gallup analysis. That doesn’t mean we can’t slip into our backyard-barbecue playlists or our next jukebox session at the bar some vintage Skynyrd. Maybe by hearing “Saturday Night Special,” Uncle Danny will consider leaving his sidearm at home the next time he goes to Home Depot or the Fort Worth Stock Show. Maybe Big Sis will reconsider pursuing only her MRS degree at TCU after subliminally acknowledging “Have you ever lived down in the ghetto? / Have you ever felt the cold wind blow? / If you don’t know what I mean / Won’t you stand up and scream? / ’Cause there’s things goin’ on that you don’t know.” And maybe “That Smell” will force Grandma to have a serious talk with herself.

One of the things that separated Skynyrd père from every other Southern-rock band in the ’70s and beyond is/was the musicianship, particularly the scorching yet rarely wonky twin solos between Rossington and Allen Collins. Based on a few spins of Skynyrd fils’ aughties-created songs, it’s now just another twangy rock outfit.

Skynyrd père, whose music dominates classic rock radio, demands reconsideration from a contemporized, more informed perspective for the sake of truth. A bit of understanding may help locate the band not at the back of the class but at the forefront of political progressiveness in the rock ’n’ roll that was produced in a severely blinkered era.