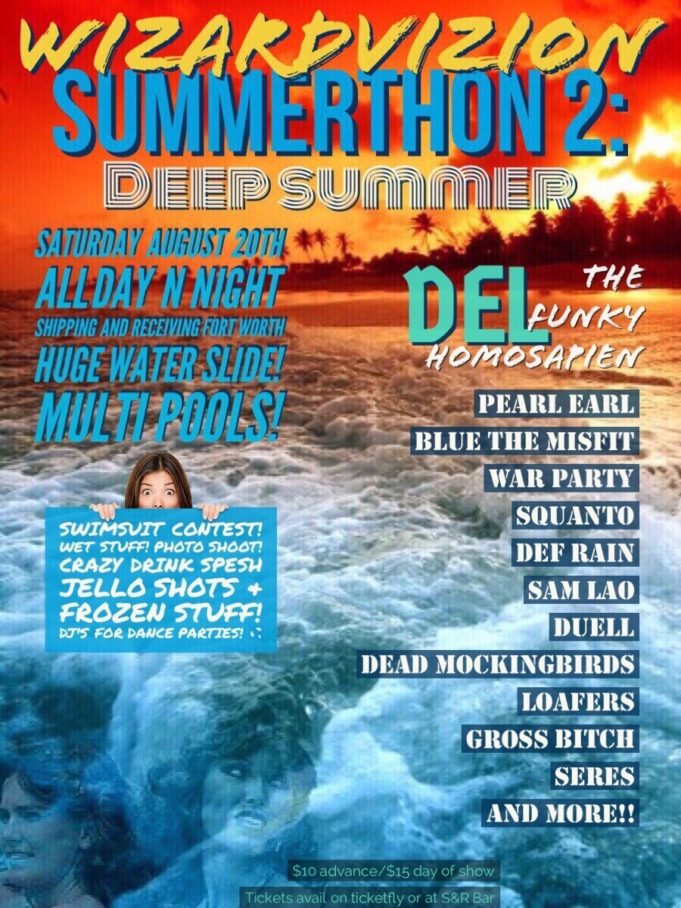 Saw a funny meme the other day. Above a picture of a chubby cat leaning out a window and looking casual was the phrase “Wants to join friends in shirtless summer fun.” Beneath: “But can’t because pizza.”

For some reason, one that has completely nothing to do with my expanding waistline or love of all things pizza-based, I thought of that cat the other day, because a lot of Fort Worthians are going to be engaging in shirtless summer fun on Saturday afternoon at Shipping & Receiving (201 S Calhoun St, 817-343-6393).

Inaugurated last year and put on by the Fort Worth record label/show thrower WizardVision, Summerthon also involves stellar underground musics. And no obvious or outward prejudices. Come as you are, indeed.

This year’s headliner is Del the Funky Homosapien, the veteran Oakland hip-hopper who has developed a party image over the years but one that’s betrayed by his complex, gritty, dark, borderline illbient recent material (well, as recent as his last album, 2014’s Iller than Most).

The supporting acts, all local, are all also killer. Pearl Earl, Blue the Misfit, War Party, Def Rain, Sam Lao, Duell, Dead Mockingbirds, Loafers, Gross Bitch, Seres, and more. But no Son of Stan or Oil Boom, which is worth mentioning because Son of Stan himself, frontman Jordan Richardson, and the bassist for his band and Dallas pop-rockers Oil Boom, Steve Steward (also a Weekly contributor), are the brains behind WizardVision. However, Steward will emcee the event. Richardson? He’s coming back the day of from a tour playing drums for White Denim, the Austin band that’s Downtown-Records labelmates with Cold War Kids and Miike Snow, among other big indie acts. White Denim is also the outfit that spawned Josh Block and Austin Jenkins, who coproduced Leon Bridges’ Grammy-nominated debut album, Coming Home. So. There’s that.

When putting together this year’s Summerthon, Steward said, the goal was to “top the party” they threw last year. Shipping & Receiving and some sponsors helped Wizard Vision acquire Del –– and also “more pools,” Steward said, and a “big-ass water slide.”

The local bands, he added, “are most conducive to soundtracking a party centered around an above-ground pool.”

WizardVision is “sort of in hibernation” Steward said, adding that he and Richardson are going to “stick to putting on the occasional show.”

One reason is that they don’t want to “burn people out with a constant succession of WizardVision events.”

Steward and Richardson would rather “do big parties like Summerthon a couple times a year.”

Another reason is that Son of Stan and two labelmates, Squanto and Bummer Vacation, are writing new material.

“I’d like to put out a tape comp or something similar this fall,” Steward said, “but I feel like Dreamy Life [Records] is already killing it on that front.”

If I were a single twentysomething (or even an attached twentysomething) this is something I would have starved myself months beforehand and done 200 sit-ups a day for. Good thing I’m old. And pizza-addicted.