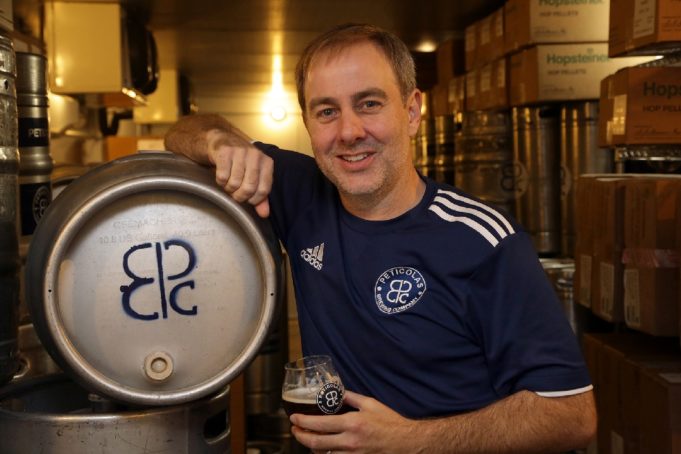 Michael Peticolas is expecting a verdict soon in a lawsuit that’s been in the Texas court system for nearly two years. The founder of Dallas-based Peticolas Brewing Company, through his legal council Institute for Justice, aims to overturn a punitive provision in the Texas Alcoholic Beverage Commission code that was added in 2013. I reported on the lawsuit back when it was filed December 10, 2014.

The law prevents breweries from requiring distributors to pay them for territorial distribution rights — but allows the distributors, once they have secured the territory, to sell them to one another. For independent breweries like the one Peticolas owns and manages, there’s a lot at stake.

“Prior to 2013, I could negotiate the sale price for the right to distribute our beer,” he told me in a phone interview. “Breweries used that money to reinvest and increase production. If I’m going to start selling my beer in a new location I’m going to need to produce more beer.”

Peticolas views the issue from a legal perspective. Before entering the brewing business, he represented victims in wrongful death cases. He still maintains an active law license in Texas.

“I spent my career protecting people’s rights,” he said. “When this right was taken from me I took it personally. I don’t believe it’s constitutional. I don’t believe you can treat one party unfairly while enriching the other” without reason.

The lawsuit, also filed on behalf of Revolver Brewing of Granbury and Austin’s Live Oak Brewing, has largely run its course in the legal system. The state, representing TABC, has argued that overturning the law would lead to “societal ills,” according to Peticolas, who attended many of the court proceedings.

An equally puzzling explanation of the controversial law was given by Keith Strama, attorney for Wholesale Distributors, in 2013. In a Houston Chronicle article that year, he said the territory provision would clear up “confusion in the marketplace.” The new provisions, he added, were “housekeeping [measures] that would clarify what already is not allowed by the state’s alcoholic beverage code. Since the code does not explicitly authorize selling distribution rights, it should not be legal.”

Rather than go to trial, Peticolas and his team are asking the courts to rule on the constitutionality of the law itself. Last week, Peticolas attended an oral hearing and was encouraged by how insightful and informed the presiding judge was about the case.

“When I filed the lawsuit I thought we were going to win,” Peticolas said. “I continue to believe that statute is unconstitutional, but I’m not the one making the final decision.”

The judge overseeing the case said she would rule within two weeks. That was 10 days ago.

“I wouldn’t be surprised if we had a ruling by the end of this week or no later than next Monday,” Peticolas said. Beyond this case, the “TABC code is in dire need of an update. I would say it’s outdated.”

Topping his list of frustrations with the commission is a long standing restriction on the retail sale of beer at breweries. Wineries and distilleries in Texas can sell bottles of vino and spirits directly to customers, but for whatever reason, breweries are left out. TABC is one of 130 state agencies that is periodically reviewed by the Texas Sunset Advisory Commission. The commission makes recommendation for “positive change” within each agency, according to its website. TABC is slated for review in 2019.

“It’ll be interesting to see what happens then,” Peticolas said.

The Weekly is proud to announce its second annual homebrewing contest as part of North Texas Beer Week. We are still finalizing details, but now would be a good time to start planning for the November 20th event at Panther Island Pavilion’s The Shack.