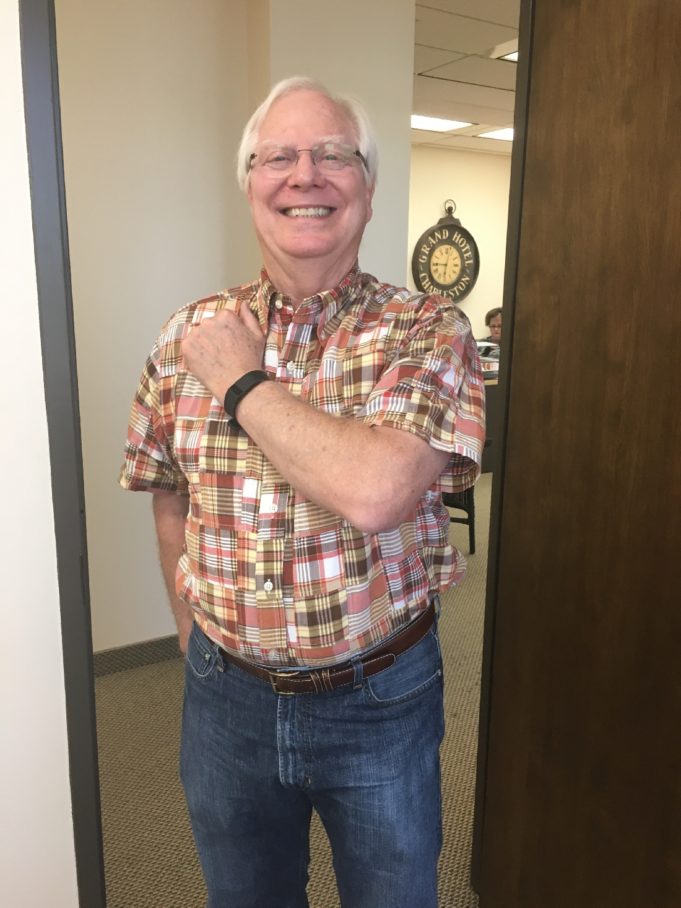 A few weeks ago I walked into my parent’s home to find my father pacing back and forth in the living room and my mother sitting in her chair with the remote control.

“Mike, Stop walking back and forth. I’m trying to watch TV,” my mother said, waving my dad out of her line of vision.

My dad made a “hmph” sound and walked off to the kitchen where he decided to go up and down the steps to their basement. I raised an eyebrow and looked at my mother, who rolled her eyes and picked up her wine. She is not quite the avid Fitbit fan that my father has become. She told me the other day she gets steps just by moving her arm up and down, so why bother actually walking?

She had a good point, too. My fiancé complained after a bike ride when he looked at his Fitbit and discovered he hadn’t acquired any steps. I saw on Good Morning America that Fitbits were off up to 11 percent. Fitbit responded with something like, yeah yeah yeah, it’s a gauge. Kind of an expensive gauge if you ask me (Fitbits range from $99-$250).

Nonetheless, every year, about a week before my dad’s annual stress test, he decides to eat healthy and exercise. He also thinks apple pie is healthy because it has apples in it.

When his doctor told him he needed to have bypass surgery, my dad held up his hands and began scoffing. Somehow he managed to convince a trained medical professional to give him a couple of months to clean up his diet and exercise. My dad: the eternal optimist. It didn’t clear up. And it was actually very dangerous to be working out when he needed open-heart surgery. He ended up having the surgery. Five bypasses. We are lucky he is still with us. 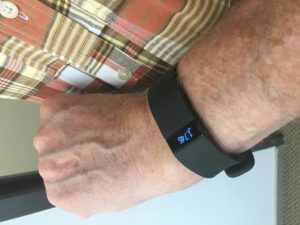 This past fall we were in Vail for my cousin’s wedding when my dad decided we all needed Fitbits to make us healthy.

My dad and I are a lot alike. If we get an idea in our head, no matter how mundane or absurd it might be, we’re doing it. So before we even made it to the hotel, we found a sporting goods store.

An employee walked up and asks if we needed help. For the next hour, the overzealous staffer talked to us about how amazing the Fitbit is

“It tracks your steps,” he said. “It tracks your sleep patterns! It tells you your heart rate! It will even tell you who is calling you and remind you to go to the dentist.”

After his big spiel, he offered to sell my dad his for $50 cheaper than a new one, but my father was too concerned about transferring the warranty to do that. He may not be practical with his health, but when it comes to warranties, he’s on top of his game.

My dad immediately put on his Fitbit, and every five minutes or so we got an update on his progress. While we sat down to eat lunch, my dad walked around Vail Village “getting his steps in” while my mother and I drank wine at Sweet Basil and shook our heads.

“How long do you think this will last?,” I ask my mom.

“I’m sure that thing will be in a drawer the week after the stress test,” she answered while sipping on a glass of vino.

Nine months later, he’s still wearing it and reporting his number of steps for the day — and usually how many flights of stairs he’s climbed, or if he got a new “badge.” Yeah. You get badges. And apparently my dad likes badges. He’s always trying to beat himself.  He walks the halls at the office. Thankfully he’s stopped spending hours calculating and entering every calorie he has consumed into his Fitbit for maximum results, which was a good thing because my mom almost threw it off the balcony after he spent 10 minutes contemplating whether or not his toast had 40 or 50 calories in it and whether or not the bread was whole grain or just wheat. It thoroughly ruins his day if he goes for a walk and has forgotten to put on his Fitbit.

“It’s like those steps were for nothing,” he’ll say, throwing up his arms in disgust.

I’m not sure he’s lost any weight.

My mom still wears hers because, on a rare occasion, when she knows she is beating him, she will call and tell my dad how many steps she has and that he better get crackalackin. I don’t think she uses that term but you get the idea. I got mad at my Fitbit because it made me feel like I was always falling short and I have enough of that in my life already. I don’t need to be reminded I didn’t hit my goal. Again. And I wonder if when my mom wins if she has been sitting in her chair waving her arm up and down. She’ll never tell.