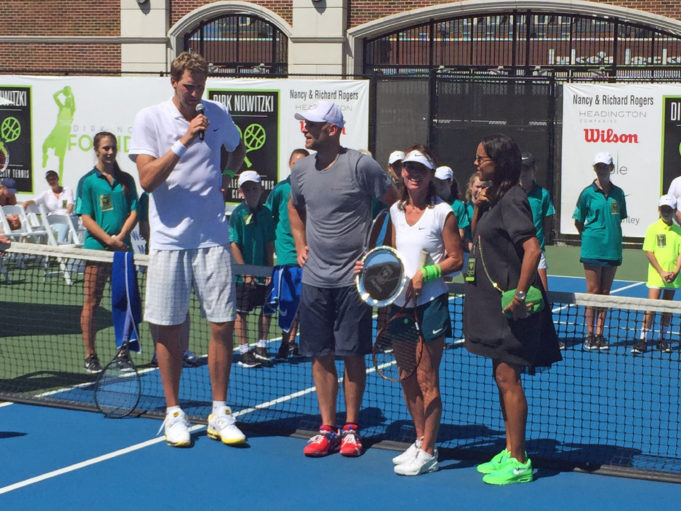 Charity sporting events seem to usually possess an interesting mix of competitive energies and laid-back attitudes. One always wants to win, and to play well, but the outcome usually falls lower on the priority list than maintaining a chill vibe.

Sunday’s Dirk Nowitzki Pro Celebrity Tennis Classic offered donors a chance to play doubles alongside pedigreed names from the worlds of sport and entertainment. The mix felt just about right. The players played hard, everyone laughed a lot, and the group left the SMU Tennis Center as friends.

Nowitzki already counted many in the draw as buddies, but he hadn’t met quite all of them in person before the event. His Mavericks teammates Harrison Barnes and J.J. Barea played (and Dwight Powell, Rick Carlisle, Donnie Nelson, and Michael Finley made non-playing appearances). Actors Ben Stiller and Boris Kodjoe (the former a newcomer to the game and the latter a former college player) represented the entertainment sphere. The tennis world filled several slots, including the top-ranked American man, John Isner, current tour players Benjamin Becker and Mitchell Krueger, and the last American to win a singles title in a Grand Slam tournament, Andy Roddick.

Stiller noted at the pre-match press conference that the “pro celebrity” event seemed heavily weighted toward world-class athletes and away from guys like him who had been in lots movies but only took up the game at age 45. A handicap system aimed to address the potential imbalances, and the team with a lower handicap could take a point or two for themselves any time before match point in the 10-point tie-breakers that made up the round-robin pools. Implementing that strategy usually consisted of taking away a pro’s service point, because who wants to return an Isner or Roddick serve if you don’t have to?

By the way, if I played against Isner in an event like this, I would ask him to rip a serve at me full speed. I would want to know what it felt like to try to return it (or maybe even just see it).

Nowitzki jokingly called obviously “in” shots “out,” but perhaps the best competitive, yet fun, element came via the non-serious trash talk that cropped up every so often. Barea began it in the pre-event media session when declared that he likes to come to his German teammate’s home in the offseason and “whoop his butt” on the tennis court. In the championship match, Kodjoe and Roddick engaged in some spirited banter. Roddick told his partner not to take it easy on Kodjoe because he was ugly (I’ve been informed by certain female experts in such things that the [married] thespian is anything but unattractive). Kodjoe remarked that Roddick’s partner, Tonya McKinney, might have difficulty seeing around the former ATP star’s allegedly sizable posterior when he crouched as she served. And when Kodjoe and his partner, Alberto Lombardi, took their handicap point, Roddick incited the crowd to boo because they would now be receiving “less tennis” for the price of their donation.

Roddick’s team came out on top anyway and he will no doubt display the plate he received next to his 2003 U.S. Open trophy. The event wasn’t about winning, of course. It was about the charitable purpose (raising money for the foundation Dirk and his wife Jessica administer) and about having a really unique and fun experience. Even for the pro tennis players, it wasn’t a typical hit-and-giggle, as they got to mingle with NBA stars and other famous faces.

The biggest giggler was Dirk Nowitzki, who no doubt took great joy in the combination of tennis playing, fundraising, and fellowship. The Mavericks forward seemed perpetually jolly through the previous evening’s pre-party and all the way through the day Sunday when he stopped through the workroom to thank the event staff. Roddick commented that “We’re all huge admirers of Dirk and what he has done for Dallas and what he continues to do for Dallas.” Indeed the big German-now-Texan deserved his weekend full of smiles.

Mitchell Krueger interview – Fort Worth native Mitchell Krueger is a pro tennis player looking to great into the upper echelon of the sport. He got to participate in the Dirk Nowitzki Pro Celebrity Tennis Classic and talks about his experience there and his goals for the rest of 2016.

Dirk Nowitzki Pro Celebrity Tennis Classic highlights – My company put this together for the event with the help of Ludisian Legion Entertainment.

The Event Pre-party – This is the only video of the event pre-party, held at Dallas’ Joule Hotel. The elegant affair featured a performance by Ben Harper and appearances by Nowitzki and some of his Mavs colleagues as well as Ben Stiller.