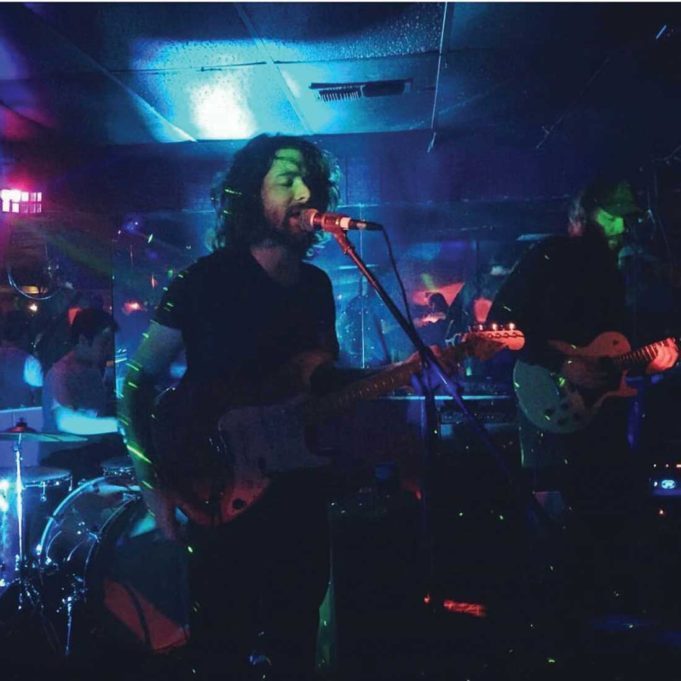 Unless you live in Irving, you probably don’t have a lot of positive thoughts to spare for it, if you spare any thoughts for it at all. In 2016, saying the city’s name brings up visions of sinkholes and anti-Muslim, redneck rhetoric. Yet for all that suburban malaise, Irving once had a music scene, one that cultivated musical partnerships that would ultimately foster the formation of Fort Worth-via-Irving’s Movie the Band.

Movie the Band’s backstory actually began farther west of Irving, however, when then-teenaged singer-guitarist Bryce Gammill (of Carrolton, as it happens) met his songwriting partner, Mac Probst, in Colleyville through a mutual friend at the private high school Probst attended. The two discovered a shared affinity for Bob Dylan.

Probst was a fixture at both the Fort Worth and Dallas locations of The Door, two all-ages Christian clubs known to any local musician who’s familiar with the lyrics to MXPX or Dashboard Confessional songs. The pair met drummer Jesse Gage about a month later, Probst recalled.

While Probst and Gammill have the most formal musical education of the bunch –– Probst studied classical guitar at Texas Wesleyan and Gammill played cello while at TCU –– Gage has been playing in bands since he was in middle school, lending his services to a litany of short-lived Denton thrashpunks who would open for bigger bands like the now-defunct ANS. One of these projects was with his friend Richard Butler, a metalhead guitar player with a background in jazz. Alternately called Wheel Bite, Gus, Asphalt Assault, and Take Out the Thrash, Gage and Butler’s band made the rounds at punk venues such as Dallas’ Red Blood Club and 1919 Hemphill in Fort Worth. Gage’s other punk bands –– No Touching and Old Potion ––floated around the legendary Denton house-party scene of a decade or so ago.

The four musicians were regulars in the DIY music scene that spread across the ’burbs between Denton and Dallas. Gammill remembers it as particularly vibrant and creative period, even in Irving, a city he describes as “kinda sad and depressing.”

“You’d be surprised. Irving had a pretty good scene for a long time,” he said. “For example, Parquet Courts kind of originated in Irving. … It’s pretty weird and cool for a suburb. There was a bunch of random music stuff going on there about 10 years ago.”

While Probst, Gammill, and Gage made the rounds of Irving and Denton house shows, it wasn’t until they’d graduated from local colleges that they started playing as a unit, when Gammill moved back to Texas after living and working in Boston.

“I studied business at TCU, and I did the whole ‘workin’ for the man’ thing for five years, but I got tired of it,” he said.

Initially, the group was just some friends jamming together. Prior to their current moniker, the band went by Airplane and then Friends, until they found a name that finally stuck.

Shortly thereafter, they discovered the added bonus that the initials work perfectly when rendered in the old MTV logo.
“We started ripping off the logo, and we’re going try to ride it for as long as can,” Gage said. “Hopefully we get in trouble for it.”

With the core membership of Probst, Gammill, and Gage, the trio got together at Probst’s dad’s lake house in Corsicana for a weekend to party and play music.

“We recorded 13 songs we were pumped about, and then we listened to them later and thought, ‘Huh, maybe we should only put up five of these,’” Probst said.

Found on the band’s Bandcamp page, the five songs comprise The Lakehaus Tapes, an EP of low-fi slacker rock, tracked live with minimal overdubs. Yet while the song ideas and the performances are solid and engaging, full of weird feedback and other enjoyable sonic splatter, the band still felt like their sound could use some fine-tuning. Though he is a guitarist, Butler was added on bass about a year ago, following the band’s lake house jam session.

“Bryce started getting into pedals, so everyone started playing louder,” Probst said.

The combination of pedal acquisition and volume competition inspired Probst to put down the acoustic in favor of an electric guitar.
With an all-electric sound, including Mac’s wife Kylie Probst on keyboards, the band finally functioned as a concrete unit, allowing the two songwriters to really hone their chops. And, for better or worse, claim Irving as a home-base.

At present, Movie the Band has tracked songs at Cloudland with Britt Robisheaux, with a cassette tape release on Dreamy Life slated for late October.

“It was our first real studio experience,” Probst said, “and now we’re both getting back to writing new songs.”
Movie the Band tentatively plans to release subsequent EP-sized recordings.

“I’d like to spend a week in the studio, but it’s a lot of money.” Gammill said, adding that the band plans to hit the road soon. “Mac and Kylie are both teachers, so we’re planning on touring in the summer.”