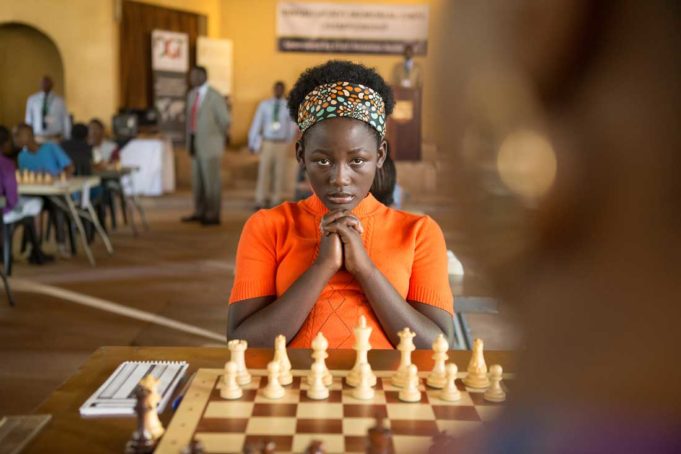 Oscar season has started to get into swing with the release this week of three big Hollywood movies based on real-life stories or well-known literary properties. By far the best one to see is Queen of Katwe, which tells the story of Phiona Mutesi, the real-life teenage chess prodigy who grew up in the Katwe slum of Kampala, Uganda and has since competed in international tournaments and risen to heights unprecedented for a woman from her country. She achieved all this without the benefit of studying the great masters or even knowing how to read and write, and living in different houses that were little more than corrugated iron sheds with raw sewage flowing by.

Her story was first told in an ESPN The Magazine feature story by Tim Crothers, who later expanded the article into a book independently of this film. The movie is directed by Mira Nair, an Indian filmmaker who has lived part-time in Uganda for more than 25 years, so she does know the territory. She can’t show that off, unfortunately, because the movie was filmed in South Africa. What she does to make up for that is fill the soundtrack with East African music by numerous contemporary artists. It’s remarkable how much music can do to create a sense of place, and these songs which combine ancient tribal rhythms with more modern sounds from America, Europe, and India evoke the particular feel of this part of the world. Elsewhere, Nair doesn’t stray too far from the outlines of conventional sports biopics — this is a Disney movie, after all — but she does a better job than anyone I’ve ever seen when it comes to filming the game of chess and the strategy that goes into it.

Newcomer Madina Nalwanga portrays Phiona, but it reflects no disgrace on her that she’s washed out by the two heavyweights in the supporting cast. Oscar winner Lupita Nyong’o breathes desperate life and resignation into the potential cliché role of Phiona’s mother, who’s afraid to encourage her daughter’s dreams because she knows how the world might crush them. David Oyelowo portrays the ministry worker and soccer coach who sets up a chess program at his church, little suspecting that a prodigy will fall into his lap. He invests the role with a born teacher’s centeredness and patience, and he gets a showpiece scene before his chess team’s first tournament, where he sees his players’ pre-game jitters and calms them down by telling them a fanciful story. Queen of Katwe is that rare movie about Africa that doesn’t involve war or disease or any other kind of large-scale death, and these performances help this remarkable story earn its uplift honestly.

After the undeserved flop of his non-supernatural biopic Big Eyes, Tim Burton has gone back to more familiar stomping grounds with Miss Peregrine’s Home for Peculiar Children, adapted from Ransom Riggs’ novel. The film begins with Florida teen Jake Portman (Asa Butterfield) getting a panicked call from his dementia-ridden grandfather (Terence Stamp) and arriving at the old man’s place to find him dying in the backyard with his eyeballs removed. Grandpa’s dying words lead Jake to a Welsh island where his grandfather’s old school does and doesn’t exist. A benevolent witch named Miss Peregrine (Eva Green) created the institution decades ago to shelter kids with strange abilities, and now she’s encased the school in a time bubble where it’s always the same September day in 1943, a place that Jake can slip in and out of because he’s a “peculiar” too.

The former kid star of Hugo and Ender’s Game, Butterfield has grown into a very cute and alas rather charmless young actor, but he can do only so much with the material. Though the movie runs more than two hours, it still feels terribly rushed as Jake moves into this enchanted world and befriends the misfit kids in Miss P’s charge. There’s no time for the script to consider the disturbing implications of Miss Peregrine’s ban on her kids discussing the outside world, nor for fleshing out the romance that develops between Jake and an air-elemental girl named Emma (Ella Purnell). We barely even have time for any sense of wonder when Jake pulls out his smartphone for these kids whose sense of technology is stuck in the past.

Burton just wants to get to the good stuff, and good stuff it is indeed when he conjures up the pointy-limbed monsters hunting the peculiars or has a malcontent of a kid (Finlay Macmillan) send Jake fleeing the room by re-animating an eyeless boy’s corpse. These show the director’s continuing talent for giving us visuals to point at and say, “How weird and twisted!” Yet without a story to connect these things, Burton is little more than a hack like Chris Columbus. He did much the same slapdash job five years ago when he adapted Alice in Wonderland, and it pulled in big audiences back then. This may repeat the trick, but it’s still distinctly minor Burton.

Still, the filmmaker I’m worried about this week is Peter Berg. It’s not that his movie Deepwater Horizon is bad. On the contrary, the film is a valuable reconstruction of the events leading up to the oil-rig disaster that led to countless losses in human and marine life. The trouble is, that’s all it is, and it feels less like a necessary narrowing of scope than a failure of imagination.

The story follows Mike Williams (Mark Wahlberg), an electronics technician for the drilling company Transocean, for his latest stint on the mobile drilling platform that shares the film’s name. He and his boss Jimmy Harrell (Kurt Russell) run the Deepwater Horizon, but BP owns the well that they’re drilling, and that company’s bosses visit the platform to present Jimmy with a safety award but also pressure him into finishing up a well that’s more than 50 days behind schedule.

The script is based on a New York Times article that draws heavily from eyewitness accounts by survivors of the disaster. Director Peter Berg gives us lots to chew over, starting with his ease with blue-collar professionals. One of the primal pleasures that movies give us is watching highly qualified people do hard jobs well, and since few films are set on oil rigs, the work that we see going towards the drill’s operation and upkeep is largely new to us. While taking us through all this, Berg and his screenwriters remember to include some life-giving touches of non-work-related human conversation. (In Berg’s Lone Survivor, the soldiers discussed Arabian horses. Here, Jimmy and his boss talk idly about Super Tuscan wines.) Once the disaster starts in earnest, Berg takes full advantage of cinema’s ability to evoke that, powerfully bringing home what kind of fiery hell the Deepwater Horizon became.

Yet Berg’s concerns seem to end with the survivors getting to safety. He and his writers make it clear that BP’s corner-cutting measures and its anxiety to get back on schedule contributed heavily to the explosion and fire that followed the blowout, but he doesn’t go near the company’s despicably self-serving actions after the oil started polluting the Gulf of Mexico. Berg is bent on making this into a heroic story about the individuals on the Horizon, and while some of them undoubtedly braved death to save their colleagues’ lives, it feels like Berg’s ignoring a huge part of the larger story in pursuit of something positive to take away. Margaret Brown’s 2014 documentary The Great Invisible told the story of the Deepwater Horizon in far more detail, a painful but vital exercise that touches on hard truths that this Hollywood movie won’t touch.