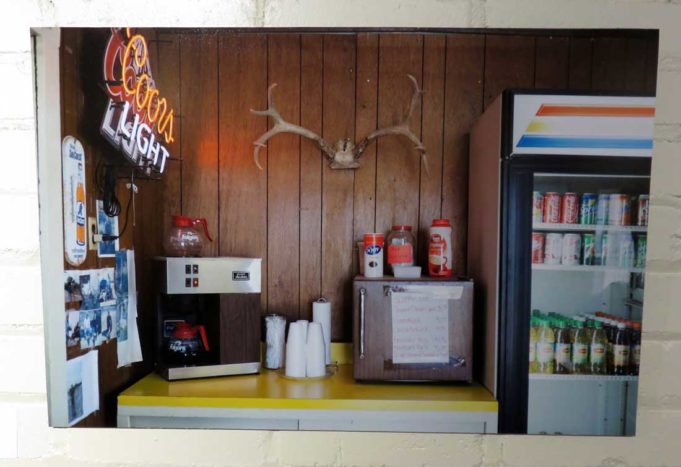 I’ve really been drawn to the paintings of one particular artist lately. Erika Duque. I had a studio visit with her a few months ago before the Transmissions group show at Fort Worth Contemporary Arts, and I’ve seen her paintings subsequently in two other shows, including FOUR at Brik Venue, my last stop on Fall Gallery Night last Saturday. Duque’s paintings tap into something primal. “Norris Geyser,” an acrylic-bound painting of the titular Yellowstone park feature could be seen simply as a painting in a popular landscape. But the near barren trees in the foreground frame a scene where the steam rising from the geyser becomes something more. It’s as if the highlights on the branches are an extension of the dancing vapors, suggesting an interconnectedness that transcends the picture. Duque’s paintings are seemingly innocuous landscapes with banal descriptive titles that almost obscure the Jungian implications of the scenes depicted therein. In most of her paintings she focuses on basic elements of life (earth, water, fire, wood), awaking our universal connection to their representations.

Gallery Night, it turned out, would hold some pleasant surprises, both in the established spaces and the pop-up shows. And with both Dallas and Fort Worth galleries competing for an art audience, I would split my time between the two cities and respond to the pieces that held my attention. As the evening progressed, I had conversations about how often I go to art exhibits and how surprised Dallas artists are to discover that I drive from Fort Worth. Going where the action is means making that drive more often than I like. I’m hoping to make fewer trips as art becomes more important to Fort Worth.

My first stop of the evening was William Campbell Contemporary Art for Steve Murphy’s All the Words Have Been Spoken. Murphy’s steel-and-lead-coated sculptures are indistinguishable from his fabricated steel pieces, creating interesting relationships between both.

From the rear of the gallery, looking across to the front of the space, one voluminous sculpture held subtle dominion over the exhibition. Unlike the bold and sharp angles of the pieces surrounding it, “What You Expected” appeared flat and oval, almost like a well-shaded drawing of a hole, emerging from the floor of the gallery. The visual weight of the lead-and-wood sculpture seemed heavier than its base could support, generating a tension that remained unresolved, even as I walked around the piece several times. I’d never heard of the Houston sculptor, and I was really happy to have a local gallery as my introduction to his work.

I did a quick run-through of Fort Works Art’s current show, Dan Lam: Coquette, and the dizzying volume of work on display was a bit overwhelming. I wanted to touch these oozing otherworldly and inventive sculptures, and I was really beginning to connect with some of them. The bright neon, under-the-sea calmness of these organic forms was transporting me to a really sweet place. But with so many pieces and with other things like furniture next to sculpture distracting me from the work, it was back to reality.

It was a short drive up Montgomery Street to the Fort Worth Community Arts Center. With easily more than 200 pieces in the center’s 10 galleries, I had to move fast. It wasn’t long before I stumbled onto works by familiar Fort Worth artists. A mixed-media collage, Val Hunnicutt’s “Overflow,” was a whimsical, surreal composition of a male figure pointing to the flow of water from a painting, through a pipe under the floor. And pink flamingos. The piece had pink flamingos. I also caught a glimpse of Devon Nowlin’s painting “Pink Stars Afar” from the corner of my eye. I would have to come back to see more later.

About half a mile east of the arts center was a pop-up exhibit, the first by the Dallas gallery Cydonia. Survey of Surveys was a collaboration between Cydonia and the Arts Council of Fort Worth specifically for Fall Gallery Night, and it presented various artists’ takes on the landscape. “And the Vessel Sailed Towards Distant Lands” was one of the hidden gems of the show. The postcard-sized drawing in graphite, color pencil, and airbrushed ink, only referenced the landscape, manipulating pastel hues in contrast with hard graphite lines to suggest rocky cliffs in a tempest. The other works, mostly photographs and text-based assemblage pieces, had been part of previous exhibitions at the gallery, shown for the first time in Fort Worth.

My last stop in the Fort before my mad dash to Dallas was Artspace 111. Carly Allen-Martin’s solo show was supplemented by pieces from other artists in the rear galleries. This is where I found myself lingering, particularly in the section speckled with pieces from Nowlin’s Casual Luxury series (an installation she did about a year ago at Artspace 111). A big-screen TV playing a TCU football game sat atop a chest of drawers, next to a painting of the opening ceremony of a Dallas Cowboys football game, complete with the large American flag nearly covering the field. The living-room feel of the installation was finished off with a couple of La-Z-Boys, a rug, footstools, and a table. It was a pleasant surprise from a pretty straitlaced gallery.

My trip to Dallas was quick and dirty. I was there for about two hours, visiting four galleries and seeing a couple of pieces that I thought about on my way back to Fort Worth.  One of them was Sandra Ono’s exhibit in the project room at Conduit Gallery. The Los Angeles native’s Everything and Nothing was a display of sculptures that employed everyday bulk materials like ace bandages and fish tank sand to talk about consumption. The forms were sometimes organic and other times effective simply by being displayed next to one another. “Experiments” was one such example, a combination of materials from shoe insoles, mini-blinds, and bandages, displayed on a shelf.

I had already been to Cris Worley Fine Arts and the Holly Johnson Gallery, so after the Conduit, I stopped at the 500X co-op space for their members’ show before heading back west. The exhibit featured 15 artists, including a couple from Fort Worth. It was worth the trip to see James Talambas’ sound installation “2,524 Earthquakes in the Past Year,” a mélange of sirens, strings, and metal plates. Referencing the number of quakes in Oklahoma since around this time last year due to gas drilling, the piece was installed on the floor of the gallery, and the sounds and vibrations were eerie and jarring.

I got back to town around 10 and made it to FOUR at Brik. The collaboration between Art Tooth and Art Room, two new Fort Worth hybrid art galleries, had probably the most energy of the night. I was pretty skeptical about the exhibit going in. Group shows with more than a few artists are usually hard to get through and can hardly be described as curated because organizers of these kinds of exhibits usually favor volume over quality. But this may have been a small exception, and the show owed its success to the size of the space and the quality of the work. There were the usual components that make pop-up shows crowd pleasers: the scene-like atmosphere with DJ sets, bands, and a food truck. But where these elements usually clash with the art, it seemed to work here. Art filled the two-story complex, with music on the ground floor. But because of the sheer size of the space, it didn’t feel crowded. There also was enough room between the works to allow viewers to truly linger and view pieces in their proper context.

Besides Erika Duque’s work (and Rachel Livedalen’s 3D-printed sculpture “Marciana Monolith”), I was glad I’d bumped into a few other pieces.

Shelby Orr’s inkjet print “Patty’s Place, Langtry, Texas” could stand in for most convenience stores in small town Texas. And Orr’s interiors are so arresting in that regard. She selects vignettes of spaces that are meticulously arranged, with odd juxtapositions (mounted deer antlers next to neon signs), turning the mundane into scenes with so many unanswered questions.

And it was great to see Dallas artist duo Chuck & George bring their grotesquely humorous Road Kill series to Fort Worth. I wish the two cities would have their big fall openings on successive weekends to allow for a less frenetic art viewing experience. But as wild a ride as it was (I ended up visiting six galleries in Fort Worth and four in Dallas), I was happy to be out looking.

Christopher Blay is an art critic for the Fort Worth Weekly and the curator of the Art Corridor II gallery at Tarrant County College Southeast. His artwork includes “Dindi (for Annibel),” a public art sculpture being installed now in Coombs Creek Park, for the City of Dallas.