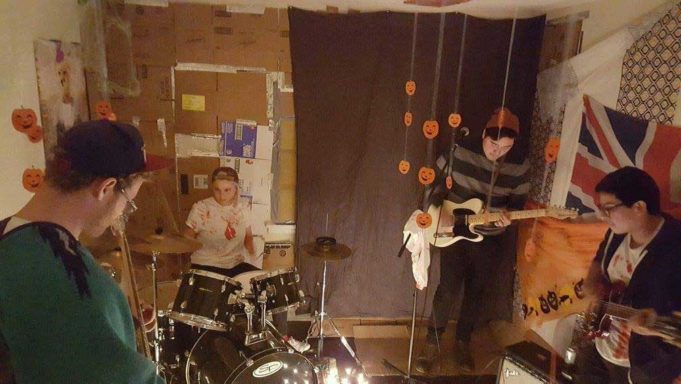 Learning on the fly has become the norm for Dead Singers Party. The Fort Worth ensemble recorded and released its debut album, Strange Youth, in January before ever playing a single live show. The months since have seen the quartet gig more, which has helped them grow in cohesion and popularity.

Singer/guitarist Humberto Serrano wrote a collection of songs and was thinking of starting a band when he ran into his childhood friend Kristen Cramer at a Sleater-Kinney show in April of 2015. Cramer, who took up playing drums when she was 16, liked the idea of jamming with her old school chum. The pair of 23-year-old Saganaw natives hit it off musically and recruited another schoolmate, Kody Vera, to play guitar in the group. The band’s first lineup was set.

“We all went to elementary school together,” Serrano said. “But Kristen had moved to New Jersey, and I hadn’t seen her in years. We reconnected at the show and immediately clicked.”

After only a few weeks of rehearsing, the trio took to their garage/rehearsal space to record Strange Youth. Serrano grew up a massive fan of Pavement and Joy Division, influences that can be clearly detected in the band’s slacker garage-by-way-of-post-punk sound. Shortly after recording the eight-song project, Serrano and company enlisted the help of another Saginaw native, Stuart Shields, to play bass. The foursome began playing live shows shortly thereafter.

As the group’s booking calendar began to fill up, the quartet focused on the studio to document more of the tracks Serrano had written. Cloudland Studios’ Britt Robisheaux (Bludded Head, Picnic Lightning) reached out to Serrano after hearing Strange Youth and expressed interest in recording the band’s follow-up release.

The musicians were nervous because they lacked any real studio recording experience. But after meeting with Robisheaux and familiarizing themselves with some of the producer’s work, the quartet entered Cloudland Studios in August to record their follow up EP, Get Dead.

“We knew we wanted more structure this time around,” Vera said. “Britt guided us through the process and made it easier than any of us could have expected.”

The result is the first batch of songs that the group feels captures its live sound.

“We didn’t really know what we were doing with Strange Youth,” Serrano said. “I had these songs written, and we knew we wanted to record them, but we had no experience doing that. We were happy with how it turned out, but it was new to us.”

The recording sessions went so well the band can’t wait to return to the studio, despite Get Dead’s release date still being more than a week away. Now veterans of studio recording, the band has a more focused vision of what will come from the next session.

“Humberto has a few more songs that were written before we all got together,” Shields said. “The next EP will be the last of those. Then we will move on to songs that we have all written together.”

Serrano said he has always been uncomfortable writing lyrics and determining a song’s subject matter. He often writes the words to the song after the musical arrangement has been set –– and in some cases, moments before recording a tune. He hopes that a more collaborative writing process will make being the frontman feel more natural.

“I always have an idea of what the vocal melody should sound like,” he said. “But when it comes to lyrics, some are just Beatles- and Beach Boys-inspired love songs and some are things that happened to me. That is always the least important thing to me.”