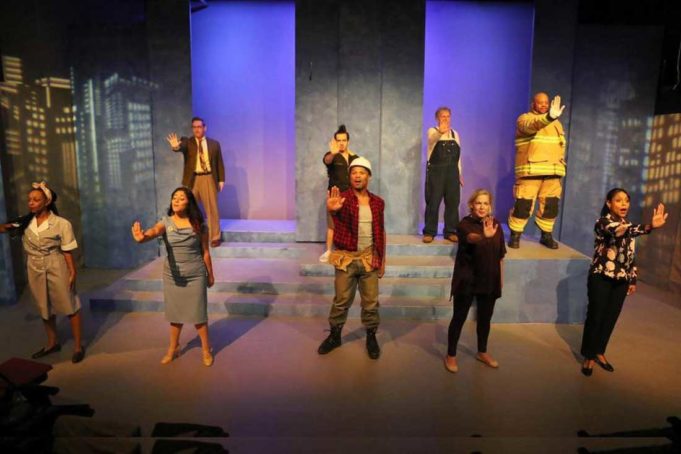 Based on a book by radio legend Studs Terkel, Working: A Musical was the first play that Jubilee Theatre Director William Earl Ray ever produced. And that was back before the veteran Austin area native was acting or directing for Circle Theatre, Amphibian Stage Productions, and Dallas’ African-American Repertory Theater. Now that he’s at the helm at Jubilee, he wants to reacquaint contemporary audiences with this 1970s musical. The cast of nine takes one fell swoop through 25-plus characters sharing blue- and pink-collar vignettes in song and dance which are unglamorously honest and genuinely funny, especially for theatregoers who’ve felt the exhaustion or frustration of a hard day’s work.

In the opening scene, all nine actors sway and sashay to “All the Livelong Day” before taking the audience into the depths of their professions, commencing with the ironworker (Oris Phillips Jr.). We hear about the intricacies of his life as it unfolds from 40 stories above, crooning himself back to the youthful bravado that once attracted him to such a dangerous line of work. His story filters into the story of the nearby parking attendant (Jeremy Davis), who sings past sneers and snide remarks from businessmen (Eric Devlin and Joshua Sherman). Not long after, female lead Kyndal Robertson serenades us through the hum-drum hoopla of cubicle life spent working for The Man who doesn’t know who works for him.

Fatima Austin flies into the next scene with a fiercely optimistic feeling of individual importance in her job as a grocery checker — an attitude she clings to relentlessly in most every one of her roles as Babe, Candy, and Delores. Austin lights up what could be a downtrodden tale of work-life imbalances, making space for the harrowing work stories of a migrant farm worker (Fernando Hernández), a firefighter (Davis), and a mill-working woman (Deon Q. Sanders). Another strong character performance came from Jenny Tucker as she sang the ballad of a tragically disconsolate housewife who is both questioned in and questioning her role of unofficial employment in her own home.

On a cheerier note, Devlin sings a springy sweet account of being a stonemason in one solo performance, and in another solo he delivers a reconnaissance of the retirement years. His strengths as a character actor were matched by the memorable character portrayals of Austin, Phillips, Hernández, and Sherman — each of whom carries a tune across the stage with ease, but the metaphorical bucket carrying their voices made their lyrics inaudible at times. Roaring around stage with stronger pipes, Davis, Sanders, and Robertson reminded us that even black box musicals are directed with Broadway-sized ambitions.

Choreographer Ursula Hicks may have overestimated the dynamism of movement necessary in a small black box theater like Jubilee. With great lethargy, the actors raised their arms through sequences as if treading through uncomfortable water. That’s not to say that the actors she coordinates were lacking in rhythm or synchronization, but the number of movements per eight count needed some upping. Individual dance solos fared much better when the actors seemed more enlivened, twirling and grooving with more appropriate pacing.

Static and indistinct, the stepped blue stage provided platforms on which actors could gain attention, moving up and downstage in tandem with their emotional connections to the jobs they perform. On one large platform at stage left, several of the stars took their soliloquies. The dim blue of the platforms carried over to the flats, which remained fixed and immoveable throughout the show. The sponge-painted effect of the blue coloring made a drab first impression, but it didn’t take long to realize the tabula-rasa intention behind this design choice. In scenic obscurity, we’re forced to imagine the characters’ work experiences in the context of our own work environments. A few chairs, checker’s stands, and other props rolled downstage for select numbers, but the use of props remained minimal. Gobo lighting patterns reflected city skylines and other workplaces, making the stage as relatable as the actors’ stories.

Though not underwhelming, not overwhelming, and not Jubilee’s strongest production, Working clamors in creative ambiguity to be appreciated by imaginative theatregoers, especially those who’ve put in an honest day’s work more than a few thousand times. You’ll see strong character actors and strong vocal performers, but no standout stars who master both above and beyond their peers. Nothing about the choreography or the stage design was so pronounced as to be suggestive of whether or not audiences should view this play as a period piece, but maybe that was intentional. Either way, the production as a whole is funky and fun enough for toe-tapping instead of head-scratching.