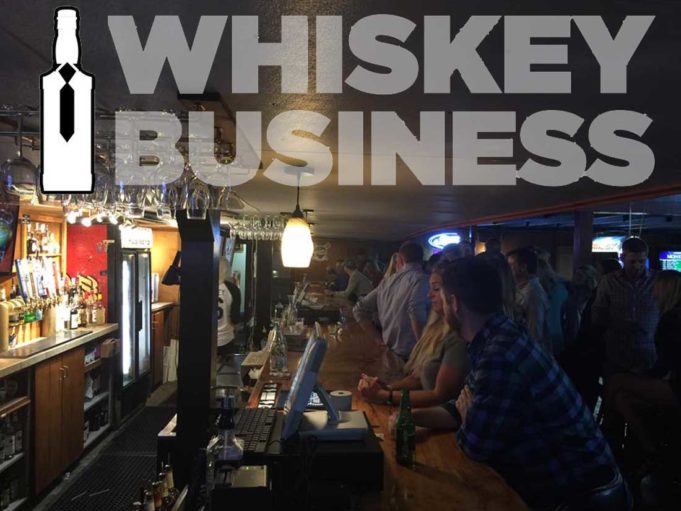 I’m gonna just throw this out there because it’s come up in conversation enough times in the past month that I can’t not mention it: “Whiskey Business” is not an awesome name for a bar. Yes, it’s a perfectly serviceable name, and if anyone drove past and wondered, “I wonder what Whiskey Business is,” that person probably doesn’t need to compromise any more brain cells with an extended bath in beer. I just wish this new joint had a cooler name, because it used to be The Mule, and “The Mule” was a name that made me want to pop in and see what was –– a’hem –– kicking around.

Still, Whiskey Business is itself a nice, if unrelated, reboot of its forebear. It’s sort of like buying a used taco truck and covering up the old logo with your own. The concept doesn’t change, just the driver. But if the bar’s song remains the same, so to speak, it’s still a likeable tune.

Whiskey Business’s owners are the same dudes behind Westside venues The Rail Club and Tomcats West, as well as The Moon Tower, a dive bar on Cherry Lane next to a Pizza Patrón. These cats know their market: blue collar, casual, cheap-beer aficionados. This is not to say that Whiskey Business is devoid of selection. You can find some craft brews on draft and in canned form –– for want of Sierra Nevada Otra Vez, I’ve been drinking Deep Ellum Brewing’s Easy Peasy IPA lately, and I was glad to see it available in the Business cooler. But this place is nothing fancy. Probably by design.

As near as I could tell, all traces of The Mule have been scrubbed, sanded, or polished away –– for one thing, the men’s restroom has actual urinals instead of that almost-too-tall pee trough that used to be there –– and that brick entryway has been removed so that the front doors open into an expanse of hardwood floors occupied by a couple pool tables and four tall cocktail tables. The bar top and the counter overlooking the pool table zone are handsome slabs of unstained, rough-hewn wood, wavy and covered with a thick coat of varnish. I think there are more TV screens now, though the patio has remained unchanged as far as I could tell. The chicks tending bar the two times I went were affable and happy to be there. The beer was cold and not overpriced, and though I commented to myself how it has some proverbial shoes to fill in the “bar personality” department, I later noticed a wooden sign resting on the back bar, carved with “Whiskey Business Est. 2016.” That seems to me to be a personality waiting to happen, which also means the bar is waiting for you to help it form one. Pop in for a drink and see what you think.

I went to Fort Worth Cocktail Week’s Texas spirits tasting on Monday, and, boy, did I not drink as much as I could have. Held at Mopac Events Center and soundtracked by a live Texas swing performance from Ginny Mac and friends, the tasting was heavy on whiskies and bourbons, and the crowd was positively, uh, libatious? Is that a word? At the risk of embiggening the English language with questionable adjectives, the event was a cromulent affair filled with plenty of Texas-grown booze and epicurious, snappy, casually dressed gastronauts enjoying the same. Each sample poured was less than the customary ounce and a half you get when ordering a shot at a bar, but when you try six of them in the space of 20 minutes or so, well, it’s a good thing there were barbecue sliders on hand. I’m typically a drinker of brown liquors, but it was Acre Distilling’s Two Minnies London Dry Gin that really blew my hair back. If you’ve ever shied away from gin on account of that post-tipple burn on your breath, Two Minnies is considerably smoother. You get to really savor the flavor of the liquor without getting overwhelmed with a massive note of alcohol.

If you missed Monday’s and Tuesday’s liquor education sessions, there’s still plenty of learnin’ to be had. Wednesday night’s Tiki Party at The Usual (1408 W Magnolia Ave, 817-810-0114) features “Tiki Dave” Mayer wowing you with delicious, elaborate tropical concoctions and regaling you with the tales of their legendary origins. On Thursday, Thompson’s (900 Houston St, 817-882-8003) will give you a chance to try some rare bourbons, and Friday’s event, at 2901 Crockett St (across from Cork and Pig), presents the merits of gin and vodka with a debate by two seasoned, clear-liquor connoisseurs. Each event is $30, and besides the liquor samples, admission gets you a souvenir glass and food.