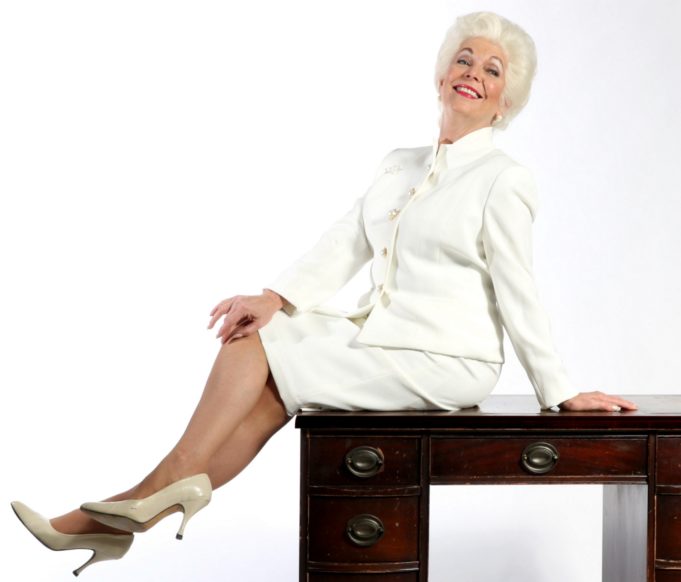 We thought we’d never chuckle at politics again, and then Ann (The Ann Richards Play) landed at Stage West Theatre –– our sides splintered with laughter.

With all the stamina a liberal Texan can muster, this one-woman act showcases the artistic endurance of Linda Kay Leonard. First written and performed by Holland Taylor — the snappy, smart mother on Two and a Half Men — the play gained momentum around the country after an impressive run on Broadway at Lincoln Center’s Vivian Beaumont Theater. Leonard saddles up to play our former governor, reeling in the hilarity that comes with Texas state politics.

The first scene, a commencement address, comes with comedic curveballs. Ann tells a graduating class a series of tall tales about her life. From birth to late adolescence, her oral autobiography inventories her humble beginnings, each story stamped with sharp-witted humor. A flashback of photos is projected above her as she segues us into her married life, motherhood, the many martinis that landed her in rehab, a divorce, and a new position as an elected official. With no shortage of Annisms, we see just what Richards meant when she said, “Texas politics is a contact sport.”

In the governor’s office, Ann stretches herself to the limits of sanity as her corded phone stretches from one side of the governor’s office to the other. She paces in circles, kicking off her heels for more serious conversations, occasionally kicking back in her chair to talk to her dear friend Bill Clinton. Her identity as a mother and grandmother intersect with her decisions on social issues, showing a softer side to her strong temperament. By the climax of the play, she racks her soul trying to decide whether or not to stay the execution of Frank Garrett. Her unpopular decision spins the plotline to the end of her term, her move to New York, and her unsuccessful battle with cancer.

From start to finish, every quip in this performance aroused genuine laughter from the audience. Taylor’s writing works because she knows how to violate our pre-existing notions of what’s appropriate for an elected official to say and do. Good writing doesn’t stand up without good timing, and under the direction of Dana Schultes Leonard has mastered the pacing of Ann. The harshest criticism to level at Leonard is that she may pause a beat too long on a handful of lines –– never to hold for a laugh, only to quench her forgivable thirst. Her persistence with the punchiness of most every line astounded theatergoers until the final curtain drops.

Although not originally from Texas, Leonard effected an accent that sounded as authentic as the voice of Richards herself onstage at the 1988 Democratic National Convention. In more intimate scenes, she inked her tone with a gentleness of character probably seen only by close friends and family members. Leonard improvised chummily with the audience, too, reacting to movements and muffled cheers with the ease of a seasoned actor before returning to her next line without delay.

The stage seized opportunities to be both understated and impressive. In the first scene, there’s nothing but a podium and a chair until Ann is elected, when the curtain lifts to reveal an elaborately constructed office. High ceilings lined with thick crown molding recreated Ann’s seat of power, warmed by soft wood interiors and shutters painted in careful detail on stationary flats. Thoughtful propping let the eye wander in search of quirky objects, such as Ann’s blue armadillo paperweight or a map depicting Texas engulfing the United States. From a pass door stage left came the voice of Ann’s assistant, frequently calling but never seen. Cue lights returned Ann to a post-term place of ambiguity in New York, eventually turning blue in color as the stage became a metaphorical heaven for her. Throughout the performance, Ann wore a white skirt suit designed to mimic her inauguration ceremony outfit. Her signature rhinestone-star pin caught most sharply on the blue stage lights, though, sparkling in a somber light before Ann shared her parting thoughts on her life in politics.

With great marketing hype come great expectations, but Schultes delivers a show that’s not only timely but memorable, owing in great part to Leonard’s ability to capture the audacity of Richards’s spirited politics. Always brazen with a glimmer of bold, the acting and artistic direction here synchronized cohesively, leaving me wondering how any other one-act play can top this production.