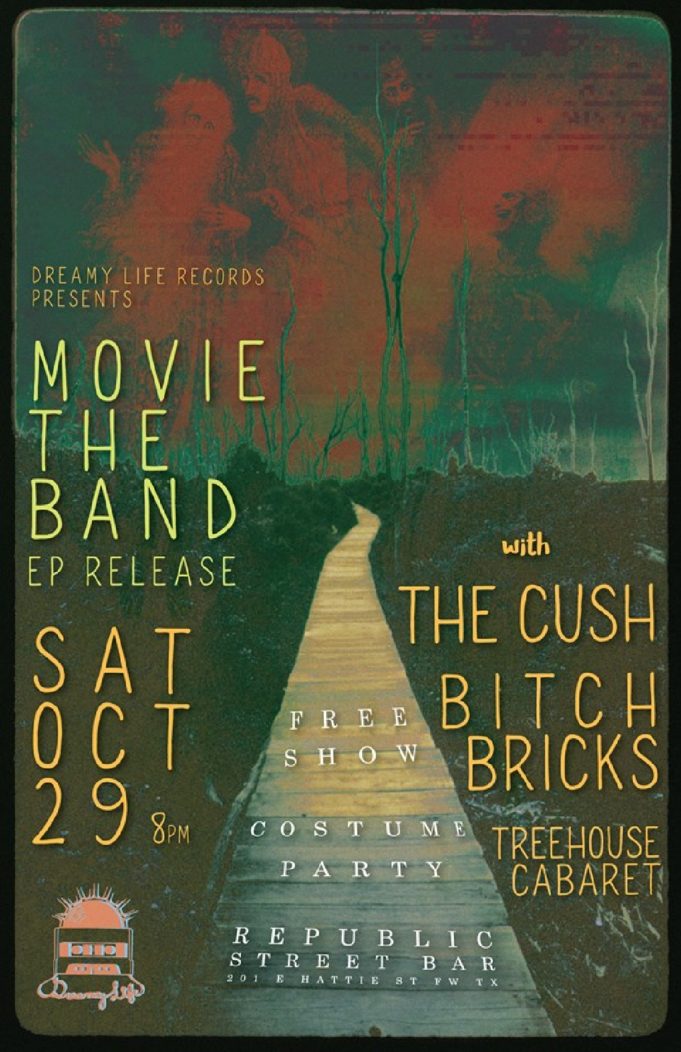 1) I was “Early s’90s Andre Agassi” for Halloween last year because I had a mullet and waited until the last minute to throw together a costume – despite such half-hearted effort, the fucking get-up still cost like $60, and I even had a tennis racket already. Worse yet, I still had to explain what I was dressed as to a lot more people than I thought. Oh well. Halloween is on Monday, but it basically starts on Thursday because costume mileage is important. If you assemble your Halloween disguise with more enthusiasm and timeliness than I do, one thing you can do on Thursday is go to the Grotto, where Wondercrust Movie Watchers Club will be making jokes about a movie from 1980 called City of the Living Dead. Trai Bo is the post-movie live band. Check out 15 mins of them playing jams in this video:

2) Here’s a horror movie question for you film fans: would you rather pick up a phone and hear an ominous voice ask “Do you like scary movies?” or whisper “seven days…”? I’m gonna go with the former, but maybe you can talk about it with other horror movie fans over craft beers at the Live Oak on Friday night – the music hall’s showing a double-feature of Carrie and Texas Chainsaw Massacre, and fans of both/either would be foolish to miss seeing those films on a big screen – foolish like the characters you yell “don’t go in there!” at in a scary movie. Although, I guess you’d be yelling “Do go in there” about the Live Oak double-feature, and you’d be yelling it to yourself. Whatever. Carrie starts at 8pm and Texas Chainsaw Massacre starts at 10. Does Live Oak serve any BBQ items? Would you eat them while watching TCM?

3) I won’t spend more space here on the long saga of the Ridglea Theater; its smaller space, the Ridglea Room, is hosting (non-cover) bands on Friday night. If you’re unfamiliar, this is the smaller bar on the west side of the Ridglea Theater building, adjacent to the Gas Pipe. Squanto is playing; as any regular readers of these lists know, I am a fan of Squanto and am always excited to see what venue’s patrons or owners he manages to frighten or baffle next. But also: Squanto playing at a place that usually books tribute bands and church-less church congregations and that also abuts a headshop is one of the most Squanterriffic (Squantastic? Squantifiable?) things I could hope for. Yeah, I guess I’m being kind of snide about the Ridglea and that’s not at all fair until I can go to a show, but regardless, kudos to whoever is putting this show on for booking original, local bands. Whatever your long-term strategy is, I hope booking and building good relationships with local bands is crucial to it. Also appearing on this bill: Sakred at 10pm, and the Velvederes at midnight (Squanto is in the middle).

4) Lots to do on Friday, right? If those other two items aren’t up your alley, perhaps you’d like to see Mobley at Shipping & Receiving? I haven’t seen the Austin-based songwriter/producer’s band in a long time, so I don’t know if they still travel with all those lights. Mobley’s Facebook page says the band is “post-genre pop,” and I remember seeing them at the Moon Bar and thinking they were in line with the dance-rock music that was popular in the mid-aughts. In other words, my impressions of Mobley: tight, syncopated, hooky, light show-y, and from Austin. A New York City band called Oxymorrons is the direct support, with Dallas’ Cure for Paranoia opening the show.

Here’s what watching Mobley is like, at least as of April of this year:

5) Saturday, head to Republic Street Bar for Movie the Band’s EP release. Let it be known that their Lakehaus Tapes demos are among my favorite local recordings of the year. They’re headlining, with the Cush at 10 and Bitch Bricks at 9. I’ve mentioned both of those bands before, and they are two of my favorites. Get there early, then chill late; Republic Street’s shows are outside, and the weather will probably be awesome – certainly cooler than what was going on at this Bitch Bricks show from July: