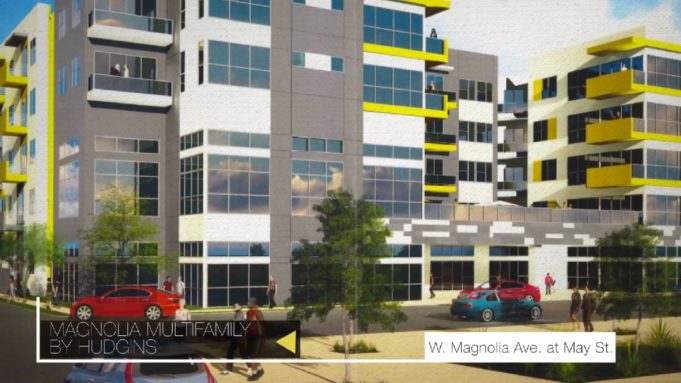 In the long-running redevelopment of Magnolia Avenue in the Near Southside, the portion that runs east of Hemphill Street has only recently started to see new activity. It has taken years of activity to the west of Hemphill for that success to cross to the east. We started to see it happen when the new Moncrief Cancer Center was constructed, and it’s been steadily building with the opening of several businesses (such as Spice, Proper, and Fixture) and a small condo project that went up behind those businesses.

Now, though, infill development is coming to Magnolia Avenue’s eastern area in major way. The former Airrite property, which is a full block bounded by Magnolia on the north, Morphy Street on the south, St. Louis Avenue on the east, and May Street on the west, is being cleared for a significant new project. The sheetmetal fence that encircled the Airrite property has come down, and demolition crews are working on taking apart the rest of the structures. 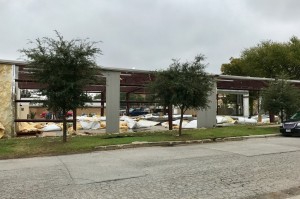 The forthcoming replacement is a sizable mixed-use development, with ground-floor retail along Magnolia and four floors of apartments above. Assuming the renderings are fairly accurate, the building (designed by Dallas/Philadelphia firm Architecture Demarest) looks to be a very contemporary structure of white and gray forms with yellow accents along the apartment balconies.

After the Airrite property is cleared, construction can get underway on the project. I’d expect to see a building of this size near completion sometime late next year or early/mid 2018, depending on when construction begins. 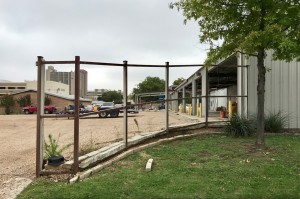 Once complete, it will definitely have an imposing presence along Magnolia, as the eastern end of the street is currently a mishmash of small 20th-century commercial buildings, parking lots for JPS hospital, and the Moncrief center (a not-unattractive building unfortunately saddled with an inappropriately suburban site layout, partially offset by a sizable public plaza along the entire length of its Magnolia Avenue frontage). This new development will add an entire block’s worth of pedestrian-oriented retail space, which should make a very noticeable difference in the energy of the street once the spaces are filled. 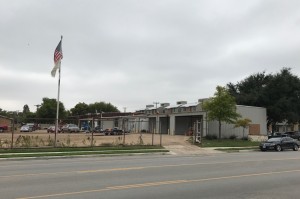 The project will also contribute some very modern design touches to Magnolia Avenue, which until recently has mainly been comprised of historic structures in and adjacent to the Fairmount National Historic District. The protected structures of Fairmount and the more contemporary developments that are now underway on Magnolia’s east end and northern side will make for an interesting, varied built environment as the area starts to see more and more of these large-scaled projects get going. This nature of the area around Magnolia is in contrast to the more monolithic development that has happened around West 7th Street, where developers were able to buy and clear large multi-block stretches of land to put down several similar-looking buildings. With the Fairmount district providing protection for many historic structures, Magnolia Avenue may wind up able to avoid a lot of the more homogenized look that accompanies such large development.