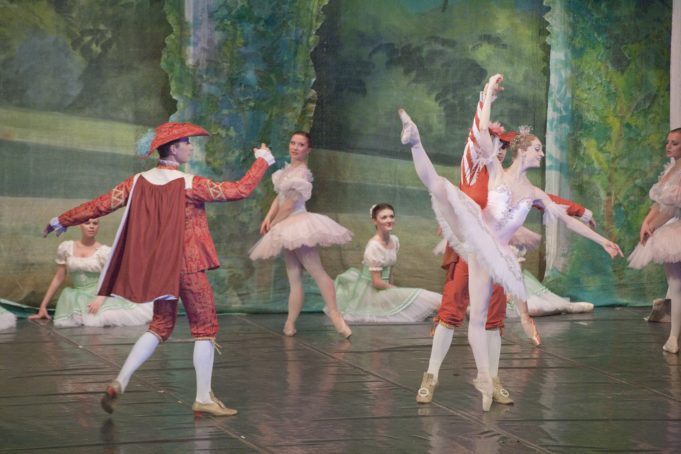 Ballet is a sports credit. At my nieces’ school, a student can use regular instruction in that traditional dance form to fulfill his or her sports requirement.

So it’s a sports credit. But is it a sport?

This column started because my 14-year old niece, who receives her own activity credits through volleyball, basketball, and tennis, insisted “Ballet is NOT a sport. It’s a fine art” (ALL CAPS were hers). This declaration came pursuant to a discussion on the matter with a classmate who disagreed because of how much physical exertion ballet demands. And indeed, I don’t think there’s too much argument that vigorous dance indeed carries many of the same fitness benefits as, say, stick-and-ball sports. But, yeah, is pirouetting and pliéing a sport?

Ballet offers competition for roles, so participants do experience some of the same pressures as an athlete trying to make the varsity. Teamwork would also seem a necessity in executing complicated dance maneuvers involving multiple cast members. But if you define a sport as needing a winner and loser (or at least some uncertainty in the outcome), as my niece contended, then choreographed routines don’t qualify. We all know how The Nutcracker turns out (spoiler : the prince gets the girl, like every other fairy tale).

Except, actually, while a pursuit might not have originally been designed as a sport, perhaps it can become one. In fact, competitive people will make a game of anything. Sure enough, ballet competitions abound worldwide (without agreement in the dance world about whether they are a good thing). Is it a huge step from ballet to figure skating? And that’s in the Olympics, which has a number of events whose outcomes rest on the decisions of the judges – kind of like Dancing with the Stars does.

We’re actually pretty good at taking stuff that its originators never dreamed would be a sport and turning it into one. Cheerleading never seemed like a sport, but then it morphed into Cheer and now it overruns convention centers with sparkly competitors trying to execute the best pyramids and dance numbers. And, yes, its organizers do want to get Cheer into the Olympic Games.

We can take sports the other way, too. Wrestling, an original Olympic sport (as in 776 B.C. original) nearly got booted from the games before an uproar fueled its reinstatement. Part of its problem is that the best-known form of wrestling is not a sport at all, but a show staged to look like a competition.

Pastimes like golf, bowling, chess, and auto racing have generated controversy about whether or not they constitute true sports. The debate constantly widens. How shall we treat eSports and drone racing? J.K. Rowling made up a sport and now people attempt to play quidditch without magic. By the way, speaking of chess, Wizard Chess could make a pretty good argument for being a sport. Expect the FIEM (Fédération Internationale des Échecs Magicien) to petition for a place in the next muggle Olympics.

Whether or not it’s a sport, ballet is for sure classified as a “fine” art. Some other blogger can take on the question of what is and isn’t fine, or, as the Old 97’s put it, “What’s so fine about art?”

Meanwhile, the next time you pursue an activity that involves some degree of motion or competition, ask yourself, “Is what I just did a sport?” The answer might surprise you.