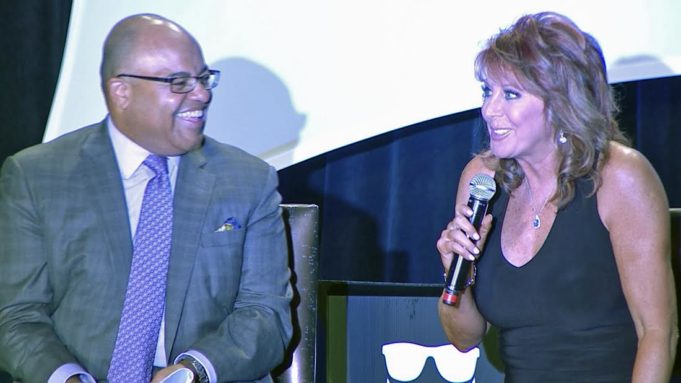 It’s one thing to break new ground. It’s another to continue to plow it, plant seeds in it, and nurture it year after year.

Last Thursday, a group of prominent sports figures (and a handful of entertainers) congregated in North Texas for the purpose of cultivating the future. The likes of Jerry Jones, Larry Fitzgerald, Rick Carlisle, and Toby Keith came at the behest of a Basketball Hall of Famer. The celebs’ host has always pushed boundaries.

Nancy Lieberman became the youngest basketball player to medal in an Olympics, the first to play in a men’s professional league, the first to be the head coach of a men’s professional team in the NBA Developmental League, and, just last year, only the second woman to serve as a full-time NBA assistant coach. What got all the prominent people to attend Lieberman’s annual Dream Ball gala, however, didn’t have to do with honoring her on-court achievements. It had to do with how she took her experiences, considered the people who helped her accomplish them, and looked to recreate their impact for others.

“All of us in this room are beneficiaries of people who reached down and pulled us up. I love that Nancy is doing that, not only on her own, but bringing all of us,” event host Mike Tirico of ESPN told the crowd.

Her Nancy Lieberman Charities aims to create opportunities for young people through basketball and educational initiatives, reflecting how assistance in those areas contributed to Lieberman’s own advancement.

“While your playing time is fleeting, the ability to turn almost every minute that you were on the court turn into a lifetime of recognizing a need and recognizing how to leverage your experiences, your career, into something that benefits a lot of people,” Cowboys owner Jerry Jones said in an interview a few days prior to the event, “Nancy’s arguably as good or better than anybody I’ve ever met.”

The Dream Ball raises funds for the non-profit’s programs, as the charity looks to facilitate another generation of groundbreakers. They honored Keith, Mavericks General Manager Donnie Nelson, and Cowboys Executive Vice President and Chief Brand Officer Charlotte Jones Anderson for their careers and philanthropic endeavors. Anderson summed up Lieberman’s philosophy from the podium as she accepted her award.

“You have many firsts associated with you, and I’m sure many people ask you what is it like to be the first.  Your response is ’It’s actually my obligation to make sure I’m not the last.’”

When people like Anderson and Lieberman break through in non-traditional sports environments, they succeed for more than just themselves. For one thing, they show the establishment a new way to win. Last week, we also celebrated the anniversary of Jackie Robinson and Branch Rickey showing baseball a new way to win, one that was quickly copied to the betterment of all.

The innovators also show the way to those who come after them, by example, and in the case of Lieberman and her guests, though personal investment of resources.

“It was my dream to be on the court because it was a safe environment. Nobody cared if I was a girl. Nobody cared if I was white or young or old. It was all about ‘could you play,’” Lieberman told Tirico on the stage. Her organization builds basketball courts at places like Boys and Girls Clubs so others can have the same experience and show that they, too, can play.

Eventually, as newcomers prove how irrelevant traits like skin color or gender or national origin are to the question of whether or not they can contribute to a franchise, more people like them get chances. Rick Carlisle introduced Donnie Nelson at the Dream Ball and spoke of the way the honoree’s efforts had demonstrated that non-Americans could play championship-quality basketball. Nelson’s open-minded outlook led him to hire a female coach for his D-League team, mostly because he and his bosses knew she understood hoops. The season she coached them, the Texas Legends made the D-League playoffs, the only time they have done so since moving to Frisco.

That season, Lieberman showed she could coach men effectively. At the Dream Ball, she and her attendees showed how the seeds sown by groundbreakers can blossom into opportunities well beyond their own fields, or courts, or continents.

Disclosure : Nancy Lieberman Charities once paid me for AV work I did on its behalf