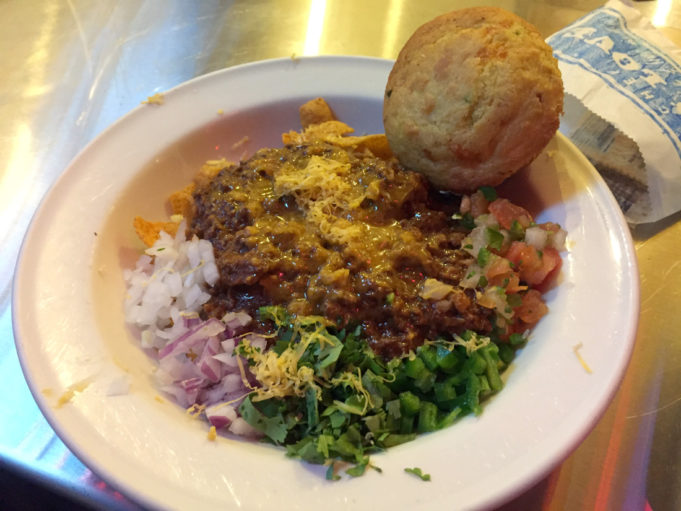 A chili parlor? That sounds very Old West. It’s only fitting that Chef Tim Love’s new concept (launched last week) is housed at one of the oldest, West-iest place in the Stockyards, the White Elephant Saloon (106 E Exchange Av, 817-624-8273). The 40-year-old bar is also one of the smokiest places in town, but this recent spate of cold weather inspired me to choke on my own sinuses for an afternoon just to get my hands on a decent bowl of chili.

The parlor is a converted storage closet that used to be home to bottles of liquor. If that sounds like it might be a small space, well, it is. As I was scanning the venerable tavern, decorated by celebrity cowboy hats on the walls and ceilings, I almost missed the walk-up counter stationed toward the back of the bar. (That may speak more to my ADD than the obscurity of the parlor.)

A few people were smoking at the bar, which definitely colored my experience. In case you’re wondering, our city’s smoking ordinance still allows food to be served in smoky bars as long as alcohol accounts for at least 70 percent of the place’s sales. Hopefully, the Smoke Free Fort Worth movement and our city council will soon reverse that archaic practice of allowing smoking in public places, but, until it does, be prepared to be greeted by stale plumes of carcinogens.

The menu is pretty straightforward. Only two kinds of chili were available on the day of my visit: Love’s signature beef flavor and stewed green pork ($6 each). You can pile on additions such as freshly grated cheddar cheese, cilantro, and crème fraîche, and each bowl is served with crackers and housemade cornbread –– the cornbread would have been a million times better had it been served warm instead of in the rock-like form that my guest and I were given. The crackers were all broken, too, for the record. But since I usually crumble them up in the stew, that didn’t bother me.

Both flavors of chili were excellent. The signature beef, an upscale take on traditional red chili (served sans beans for you social media trolls who can’t get enough of that inane debate), was well seasoned with a complex, developed spice. The presentation was a lovely arrangement of minced jalapeños, fresh onions, cheddar cheese, crème fraîche, Fritos, and pico de gallo, all beautifully situated around the oily meat. My guest’s green pork chili was more of a stew, really. Whatever you call it, it was spicy, the meat tender, and the thick broth an intense amalgam of peppers, onions, and seasoning. Like me, my pal loaded down his bowl with just about every add-on the kitchen offered. It’s a testament to the chili that the extra ingredients added to the flavor instead of obscuring it.

My only complaint was the portion size – my kitten’s milk bowl is deeper than Love’s chili bowl.

Love’s chili parlor at the White Elephant Saloon is open for lunch, dinner, and until 1:30am on weekends.

The temperature is only going to be cold enough for a little while longer to really enjoy a hot bowl of chili, so go appreciate it sooner than later – assuming you don’t mind wading through a cloud of cigarette smoke to get it.