Christmas is about family, faith, love, peace, and warm, fuzzy kittens. And, for sugar addicts, it is also about controlling cravings. The “holiday season” –– from Thanksgiving to early January –– provides approximately six weeks of legal gorging. Cookies, cakes, and pastries begin appearing regularly at the workplace and at friends’ homes. That’s enough temptation to ruin a diet –– or to catapult someone into a headlong death spiral.

Two decades ago, when I was a staff reporter at the Fort Worth Star-Telegram, I attended an Overeaters Anonymous meeting during the holidays for research. I listened to people describe their food addictions in ways that sounded like crackheads talking about a pipe or junkies talking about a needle. A rotund man described how he would drive to Wendy’s to buy two hamburgers and fries and then go to Whataburger and buy two hamburgers and fries. He was ashamed to buy four hamburgers at one restaurant.

A slender, pretty woman described how good it felt to be slim and healthy and told routinely that she looked attractive. She had lost 100 pounds through extreme dieting and exercise and kept it off for a year. She loved how light she felt. Then she described another feeling, more haunted, a fear that she would inevitably return to her old ways.

I didn’t tell my editors back then, but I had pitched the story about eating disorders because I suspected I might have one of my own. Ever heard of binging and purging? Well, I hate throwing up, so I just binged. Sweets –– chocolate, most of all –– were my poison. I’d skip breakfast, eat a normal lunch, and then eat chocolate bars in the afternoon. At night, I usually skipped dinner and went straight for dessert. From the time I got home from work until I went to bed, I’d eat ice cream. Or cookies. Or donuts. Or chocolate covered peanuts. And whatever container got opened got emptied before bedtime.

This delicious self-assault went on for years, until 2005, when I started noticing my feet were numb. When they weren’t numb, they felt as if needles were sticking in them. I knew what was up. Diabetes runs in my family. Rather than go to a doctor, I decided to handle things myself. I stopped eating chocolate, ice cream, cookies, pies, cakes, candy bars, donuts, and all the things I craved constantly. I quit everything cold turkey.

The plan worked. The numbness and pain went away.

Quitting sugar was like quitting crack. I’ve never done crack, so I don’t know for sure. But it was tough. Natural sweets in apples and bananas aren’t the same as a chocolate eclair.

Graham crackers were my methadone, giving me just enough crunchy, sweet near-cookie satisfaction to keep me from mainlining Ho Hos.

Ten years passed. I had medical check-ups during those years. Blood pressure, cholesterol, and all that stuff were fine. The yearning for sweets never left, but it is easier to go cold turkey and never allow room for exceptions, even though many nutritionists and eating experts say the opposite. I was strong. Like an oak.

The whole nutritional lifestyle thing exploded in my face for no reason one day. While I had not realized that 10 years had gone by without my succumbing to the lure of sweets, my subconscious apparently did. I was driving home after work one day and could not stop thinking about chocolate chip cookies. I whipped into a store on the way home and told myself I was going to get milk and eggs. The cookie aisle, the one I typically made sure to avoid, was right there by the freezers with the milk and eggs. For some reason, I cut through that aisle. I stopped and allowed myself to look at a package of cookies.

A bargaining session began in my mind. “If you buy these chocolate chip cookies, you will eat the whole bag. Don’t do it. Chocolate is enemy No. 1. Maybe it would be OK to buy cookies that don’t contain chocolate. Hey, look at these oatmeal cookies. People eat oatmeal for breakfast, not dessert. The cookies have that white frosting on top, but it’s a very thin coating. These should be OK. A man deserves a cookie once in a while. Wait, this doesn’t feel right. What the hell am I doing looking at cookies? Back away, you fool! Wait, I’ve got it. The oatmeal cookie package contains three rows of eight cookies. I could eat one row of cookies tonight, and then the middle row the next night, and so on. Spreading out 24 cookies over three days isn’t terrible. I’ve been a rock for 10 years. I’ve obviously learned restraint.”

I bought the cookies, got home, sat in front of the TV, and ate my row of eight. They were wonderful. I mean, like, holy-mother-of-God good. As soon as I devoured my row, I put the remaining cookies in the pantry, sat in my chair, and tried to watch TV. But all I could think about were the cookies. Since this was my first time to splurge in a decade, I figured I would allow myself to eat half of the middle row or four more cookies. Once I finished them, I decided that leaving a half-row of cookies didn’t feel right. So I ate four more cookies. Then I figured I had already eaten two rows, so I might as well finish the third.

Every night for the next eight or nine months, I bought and ate a carton of those same cookies. I didn’t look at the nutritional info on the container, or I would have seen that the 24 cookies contained a total of 2,160 calories, 96 grams of fat, and 216 grams of sugar. Toward the end of that year, I began experiencing regular headaches. I went to the doctor, who expressed surprise that I wasn’t dead from a stroke or heart attack based on my test results. I went cold turkey again. A litany of medicines later, all my ills are under control. But it gets tough this time of year. Just yesterday, we had a party at the office. The conference table was covered with numerous packages of candied popcorn. I picked up a pack, and I heard the old familiar voice: “Popcorn is low in fat despite the caramel coating. It won’t hurt to eat one bag.”

My holiday tip for all the well-meaning hosts and hostesses out there: If you offer a guest a plate of your special chocolate chip marshmallow oatmeal sugar death cookies, and he politely refuses, just smile and stop offering. Don’t insist. Somebody’s life might depend on it. 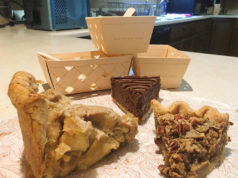