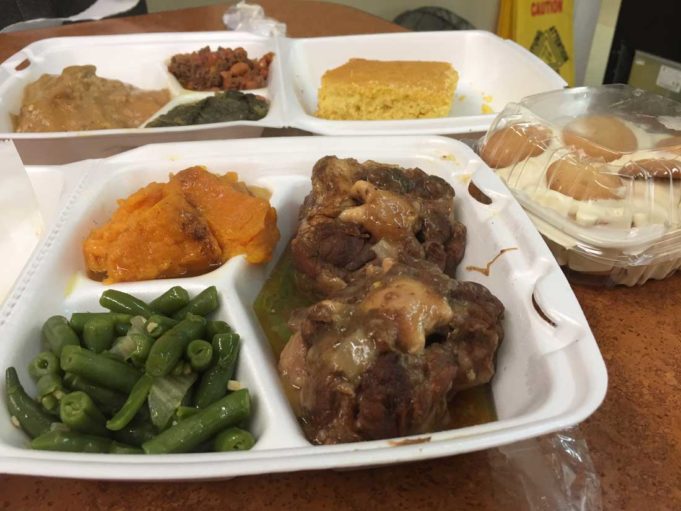 I don’t think it was a coincidence that Teddy Pendergrass’ “Love TKO” slinked through the speakers at the exact same time my lunch arrived. Both the grub at Stormie Monday’s (3509 E Berry St, 817-413-0036) and the slow jam oozed sex appeal. There are few things more satisfying than great soul food or a smooth R&B groove. When the two happen at once, well, that’s just the cosmos telling your senses to slip into something a little more comfortable and meet them on the couch.

The groovy tunage was piping through from an adjacent bar, separated from the dining room by just a swinging door. Before that denouement, the soundtrack for my visit to the Eastside café was the snarky bickering of TMZ, which was faintly broadcast on the joint’s lone boob tube. Once we sat, my guest and I endured an awkward encounter with the place’s unofficial ambassador, a woman in her 50s who seemed to know everyone there and has tried everything on the menu.

“Next time, you have to get the burgers,” she bellowed in a voice that could serve as a foghorn in a pinch. “They’re huge.”

After making sure we had all of the condiments we needed, the woman loudly demanded hugs from every staffer, all of whom made their way from behind the small counter to oblige her questionable boundaries.

Even the greeter lady added, um, character to the place. Stormie Monday’s has all of the hallmarks of a great dive – ramshackle building, worn out paint job inside, bars on the doors, and ripped linoleum floors. It’s the sort of place affluent, white hipsters pretend to worship when they want to appear more authentic.

I’m neither affluent nor hip. And after a few minutes of politely nodding to the Stormie’s super fan, the beat and the meat both kicked in. Out of nowhere, we went from mundane chitchat to pure sex on a plate.

The lunch specials are each served with two sides, and all four of the co-stars I sampled that day were outstanding. The cinnamon-kissed yams were sweet but not cloying. Fresh-tasting, well-seasoned green beans still had a snap. Spinach absorbed the taste of onions that were stewed with the leafy greens. And the pinto beans were so covered in spicy sausage that I’m not sure I ever tasted a bean.

The real showstoppers were the main courses. My oxtail ($10) was fall-off-the-bone tender and drenched in its own juices. It tasted like pot roast but with a little pink left in the meat. The pork chop ($7.50) was smothered in onions and flour and was (plastic) fork tender. Most places overcook and dry out their pork, but Stormie’s slow-cook preparation kept the pig moist and flavorful.

If I had to nitpick, I wasn’t crazy about the cornbread. It had a nice, sweet flavor, but the brick-sized slab was dry and served cold. I also wasn’t crazy about the Styrofoam boxes that everything was served in or the plastic utensils. Neither hampered the overall experience, and it’s easy to look past such trifles when Mr. Pendergrass is whispering sweet nothings in your ear.