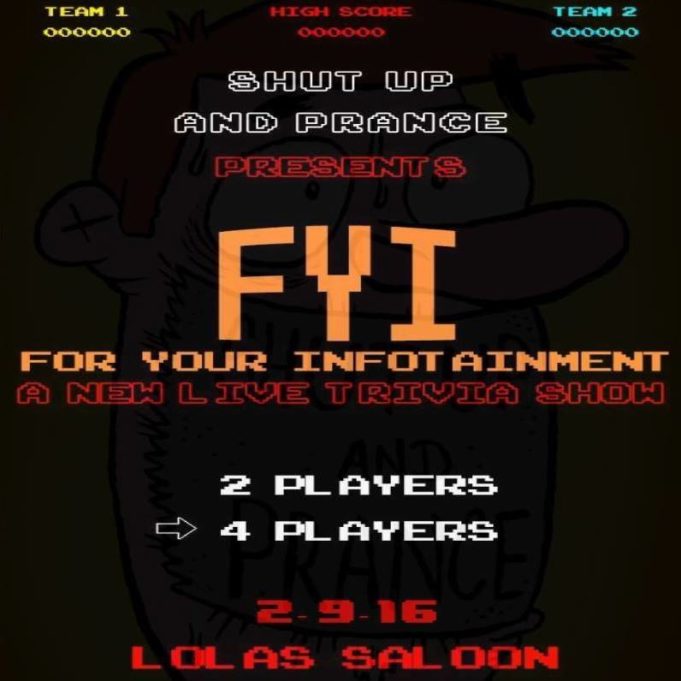 1) One thing you may not know about trivia nights at bars, the hosts often dabble in stand-up comedy. Or maybe that’s just because Sam Dobbins was dabbling in stand up when he hosted the trivia night at the Boiled Owl, and I am broadly extrapolating from that single instance. Either way, on Thursday, Lola’s and Shut Up and Prance are presenting For Your Infotainment; it’s billed as a “Live Quiz Show” and features several area comedians, including De De T, Monna DP, and Frida Monet, hosted by Lindsay Goldapp. The cover is $7, but the Pop N Cream popcorn is complimentary, as is laughing. Show starts at 9pm. Here’s the #SUAP trailer for the event:

2) There’s a free show in Dallas at the Foundry, a bar with a huge outdoor patio, a stage covered with wooden pallets, and a chicken restaurant next door called Chicken Scratch, which serves incredible fried chicken and things that typically accompany fried chicken. Get the greens, y’all. You won’t be disappointed. The show, featuring local psych rock band the Cush and the dub-informed trip-out sesh of Wire Nest, will also not disappoint. Music starts at 7pm; parking is tight over there, so get early or prepare to valet. The Cush played a live thing at KXT once; this is what it looked and sounded like:

3) Saturday night, Shipping and Receiving hosts a benefit for the Fairmount Community Library, called I Heart the Library. The suggested cover is a mere $5, and the music starts at 8pm with Vogue Machine, followed by Programme, Jack Thunder and the Road Soda, and Movie the Band headlining at 11pm. What ad will you be served before this Movie the Band video? I got “masochistic Kristen Schall for T-Mobile”:

4) Also on Saturday: the Boiled Owl Tavern’s 5th anniversary party. This battle of the network stars includes Oil Boom, Programme, Joe Gorgeous, and Ro Boogie, with DJ Joel Gion (the tambourine player from Brian Jonestown Massacre) playing music in between bands. Austin-based Independence Brewery is taking over the beer taps, and the event is tiki themed; if you have a Hawaiian shirt of some sort, wear it to this free party. Wanna know what it’s like to be at the Owl for several hours? This is a cool time-lapse video:

5) One more for Saturday: the Grotto is headlined by the Infamists, a no-bullshit rock band from Denton, Dallas folk rockers Loyal Sally, local southern rockers Moonlight Native, and Monoculture (a psych-rock band, also from Dallas) in the preceding spots. Do you dig Mean Motor Scooter? You’ll probably be into this Infamists video then: