1) Friday night, go to 4DWN Skatepark in Dallas (2633 Ferris St) for this rad show: Aquarian Blood, Same Brain, Steve Gnash, and Lizzie Boredom. What a great lineup! Not sure if it’s a benefit, because the word “donation” is involved, so I’m gonna say that the $10 you are expected to pay for admittance is a “cover” that also gets you some food and beer courtesy Indy Brewing and Lagunitas brewing. Also, skateboarding! Here’s a video of Steve Gnash from the Live Oak last month: https://www.youtube.com/watch?v=F8L9PA1BUdE

2) Free show alert: Republic Street Bar has one on Saturday headlined by Dallas-based Teenage Sexx. Denton’s Sunbuzzed are in the middle, and openers the THYROIDS are releasing a cassette. This garage punk-oriented show starts at 9:30 and is 21-and-up only – minors need to stay home or wait in the car! If you know former Skeleton Coast/Son of Stan drummer Brian Garcia, doesn’t the THYROIDS drummer kinda look like him in this video? https://www.youtube.com/watch?v=YsCmbTEvLxQ

3) Jokes aside, SXSW always brings some out-of-town bands up this way, especially if they have to already use I-35 to get someplace else. As a result, there are a couple fests this weekend at Lola’s; the first of these is Fuzzed Out!, on Saturday and headlined by local death/space/insert other sub-genre of metal heavies Turbid North. Also on the bill: NY’s King Buffalo, Wo Fat from Dallas, local rock band Royal Sons, Haltom City’s The Me-Thinks, Plastic Daggers from Colorado, Great Electric Quest, and Mountain Tamer, both of who are from California. As the name implies, each of these bands undoubtedly has a fuzz pedal or three amidst its gear. Tickets are $10 and the show’s all-ages. Doors are at 6pm. Here’s a King Buffalo song I like: https://www.youtube.com/watch?v=1HKmZ8P14Qo

4) Magnolia Motor Lounge  has rock bands on Saturday night, playing a show called Dead Arenda Spirit, which really means Arenda Light play at 10pm, Dead Vinyl play at 11pm, and Animal Spirit headline. Seems like Animal Spirit had a blast at SXSW this year, so ask them about it.

5) This weekend’s other festival featuring bands fleeing SXSW is cheekily titled Less Stress Fest. Like Fuzzed Out!, Less Stress Fest has a mix of touring bands and a couple locals – in this case, the show is bookended by local bands Son of Stan at 4pm and Oil Boom at midnight – but the hook is that SXSW is a hassle, so here’s a way you can experience the actual “discovering new bands” concept without the accompanying anxieties born from the traffic, lines, and the staggering reality that huge companies spend hundreds and thousands of dollars on events that few people see and promotional products that end up in the gutter, all in an effort to spread awareness about the new type of ranch dressing Subway is rolling out, or to assure you that Twix is a candy you can eat while listening to the hottest new indie bands. Anyway, here is the full lineup: Mothers, Big Thief, Happyness, Flint Eastwood, Hockey Dad, Muuy Biien, Never Young, Oil Boom, Son of Stan. Less Stress Fest is on Sunday, is all-ages, starts at 4pm, and costs $10. Please enjoy this Hockey Dad video: https://www.youtube.com/watch?v=dKCpPWEvZJ0 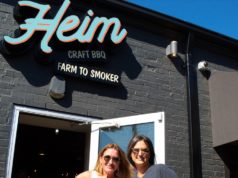 On Tap in Fort Worth: Fighting Right