I’ve decided I like Aerial Powers. It has nothing to do with her making the WNBA All-Rookie Team for the Dallas Wings last year, though she is certainly an entertaining player to watch play.

No, I like Ms. Powers because when we discussed my name, she compared it to the movie “Rush Hour.” I admitted to owning the film on VHS and she graciously claimed that fact did NOT make me old. With respect for her at an all-time high, this apparently well-preserved reporter proceeded with the interview you can watch in this post. 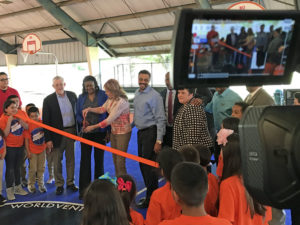 Powers, along with Wings teammate Tiffany Bias, head coach Fred Williams, assistant coach Taj McWilliams-Franklin, and members of the club’s front office, had come to Arcadia Park in Dallas to witness the dedication of a Dream CourtTM. The event was timed to coincide with the presence of the Women’s Final Four in Dallas this weekend, and the NCAA had worked with Nancy Lieberman Charities and the WorldVentures Foundation to place the court in the Oak Cliff neighborhood.

After the VIPs had done a ribbon-cutting and dedicated the new basketball court, I talked with her about the Final Four, the ceremony, and the upcoming Wings season. We did not discuss movies of (relatively) recent vintage.