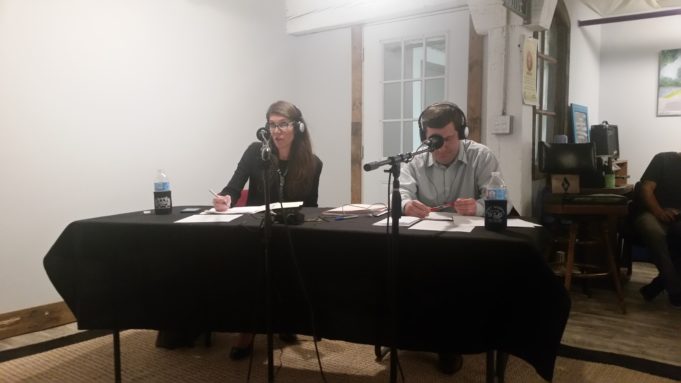 The city council position for Fort Worth District 9, which includes downtown, the Near Southside, and West 7th District, is up for grabs. Current District 9 councilwoman Ann Zadeh is seeking reelection after first taking office in 2014. Her challenger, John Fitzgerald, a Ryan Place resident and political newcomer, is building his campaign around a populist message that city officials are too pro-business and not responsive to residents.

District 9 remains a major economic driver for the city, but many area residents regularly voice concerns about the availability of affordable housing, the recent influx of out-of-state developers, and access to public transportation. Yesterday, thanks to the efforts of KFTW 97.5 The Pirate and a handful of local volunteer groups and businesses, Fort Worthians heard a lively debate over these issues.

The live-broadcasted debate, held at Near Southside-based Pirate Radio Station, was moderated by Fort Worth Weekly associate editor Eric Griffey. Here are some highlights.

In her opening remarks, Councilmember Zadeh touted her efforts to bring new parks to District 9. Ensuring urban areas are walkable and bike-friend and preserving LGBT rights have also been high priorities, she said. Fitzgerald used his five minutes to introduce himself as a private sector engineer who represents a growing number of residents who believe the city all-too-often sides with businesses and developers over the objections of locals.

Griffey: The houses being built in hot urban villages are really expensive, much too expensive for a lot of service industry workers. What are some of the ways we can create workforce housing?

Zadeh: I think that is one of the things that happens when an area gets hot. In the past, there has been a focus on concentrations of affordable housing in one area. So you end up with pockets of poverty, which has not been a successful way of handing that. [My] goal is to have a cross section of affordability and a cross section of availability.

Fitzgerald: It is terrible how homeowners are getting pushed out of their neighborhoods. Sadly, this is what is going to continue to occur as the city always chooses developer interests over homeowner interests. Many of the city’s social services are overburdened. It would be irresponsible for the city to go forward with [future development] plans without a good plan in place for how to protect these residents and help them find new homes.

When asked about the role historic designations play in city planning, Fitzgerald and Zadeh both stated their support for form-based codes and historic overlays that place protections on historic buildings. Zadeh stressed the importance of teaching property owners about the benefits of such protections.

Griffey: In January, city council approved a 138-room, $55 million hotel near Magnolia Avenue. Some residents expressed concern about how the hotel would affect the flow of traffic and character of the neighborhood. How did you address these concerns?

Zadeh: When this property was brought to my attention, I looked at all of the pros and cons. Our staff reported it as compatible and consistent. By right, the property owner could have built a six-story office or apartment building. The question we were being asked was about the hotel use. I felt the hotel would bring additional support for retail and other businesses that could then enliven the street and make the businesses there even more successful.

Fitzgerald: My experience with it was that residents were surprised by the hotel and zoning change. No one let the president of the Fairmount Neighborhood Association know about it until about two months before the zoning change was to go to city council. This hotel has been known for about five years. Almost 500 neighbors signed a petition opposing it. They wanted to delay the vote to work out some of the issues that concerned their neighborhood.

Zadeh and Fitzgerald found common ground on the topic of Envision Hemphill, a revitalization effort focused on a Near Southside park and busy stretch of Hemphill Road. Both cited the project as an example of a successful partnership between the city, businesses, local residents, and volunteer groups like Keep Fort Worth Funky.

Griffey: Almost a decade ago, the city hired an engineering firm to research the possibility of a streetcar in Fort Worth. The proposal had the support of 75 percent of Fort Worthians. The council voted down the proposal. Are you in favor of a streetcar and what is your vision of public transportation in Fort Worth?

Zadeh: I was on the zoning commission when the streetcar was discussed. I was very disappointed when we did not move forward with that project. I am in favor of a multi-modal transportation system in Fort Worth. We are at this moment working on circulators similar to Molly the Trolley to circulate through the Cultural District. The next branch would be coming to the [Near Southside]. We are moving forward with TEX Rail, which will run from downtown to DFW airport. I’ve been assured that will be finished in 2018. We are also increasing the frequency of trips for busses throughout the city.

Fitzgerald: Streetcars are a good idea, but they can be quite expensive. We have a very good bus system in Fort Worth. I believe bus riders should be encouraged by city council. Bus rapid transit is easy, fast, and affordable.

When asked about the growing problem of parking availability in Fort Worth, Fitzgerald stressed the need to protect residents by expanding permit parking along residential streets. Zadeh noted that the city is currently heading a pilot program to test the effectiveness of permit parking.

The topic then turned to relations between the public and Fort Worth Police Department. Zadeh said “99 percent” of feedback she hears from her constituents regarding police interactions is positive, but she was “very disturbed” by the recent treatment of Jacqueline Craig and her daughter at the hands of a Fort Worth police officer. Fitzgerald stressed his respect for police officers while suggesting the city form a 12-member Citizen Advisory Board, because communication between residents and police officers is “very important.”

The debate then opened to the “chat rats” at the Chat Room Pub. Richard Wiggle asked if it is the duty of the city to protect employees and patrons from the hazards of secondhand smoke. Fitzgerald stated his support for a smoking ordinance that allows existing businesses and bars to continue allowing smoking while requiring new establishments to be smoke-free. New cigar lounges could allow smoking. Zadeh noted that many business like Billy Bob’s Texas are voluntarily going smoke-free. Fort Worth City Council is discussing what a more comprehensive smoking ordinance could look like, she added.

Taylor at the Chat Room Pub asked what the city is doing to ensure that small businesses aren’t pushed out by large chains.

Fitzgerald: We’ve seen a steady increase in development in our city. The motto of Fort Worth should become, ‘Growth. Growth. Growth. Let’s all develop first, and we’re going to fix our traffic and storm water problems later.’ We should focus on fixing these issues before we allow so much development. As far as small businesses go, they’re getting hurt right now because their rent continues to rise. Eventually, this is going to force small businesses out of the area. As that occurs, the only businesses that can move into those areas are chains. That’s why I support reducing taxes to try to give some of these small businesses some relief.

The candidates were then asked how they would handle landlords that allow crime and repeated code violations on their properties. Fitzgerald suggested a “slumlord ordinance,” which he said other cities have implemented to hold wayward property owners accountable for what happens on their property. Zadeh said the city is implementing a new project called One Address, an online resource people can use to report crime for mapping purposes. The city is currently tracking and analyzing that information, she said.

Finally, the candidates were asked where they get their favorite burger and taco.

Zadeh: I love the salad burger at Fred’s, and I like Salsa Limon.

Fitzgerald: I would probably say Rodeo Goat. I like to get the Cowboy Murrin when I’m there. I always enjoy Yucatan Taco Stand for their tequila and lime chicken taco.

The Fort Worth general election is May 6.