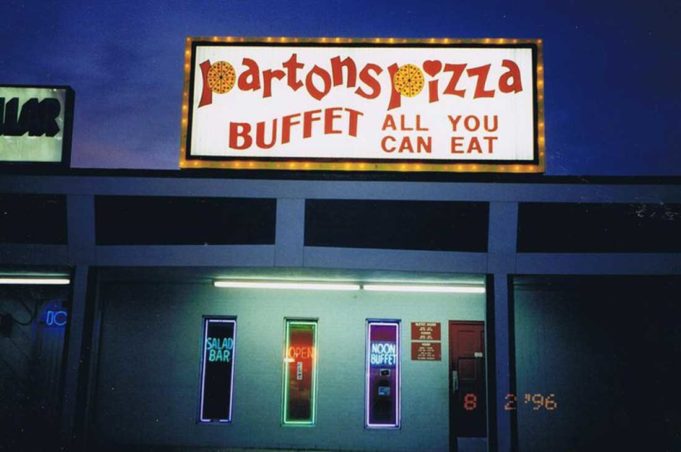 Until this week, I hadn’t eaten pudding in probably 20 years. But, there I was at Parton’s Pizza (2813 S Cherry Ln, 817-244-5152) spooning a thick hillock of jiggling chocolate sludge into my greedy maw like a hyperactive pre-teen. The gelatinous dessert was the final touch on my most recent nostalgia tour through the pizza joints of my youth – a trip that started quite accidentally when someone at the Weekly office brought me some leftover pizza from Mr. Gatti’s Pizza’s newly opened location in the Museum Place development (3268 W 7th St, 817-435-2222).

When I was a kid, the local pizza landscape (according to my memory of it) consisted of Mama’s Pizza, Parton’s, Domino’s, Pizza Inn, and Pizza Hut. There was only one Mr. Gatti’s that I was aware of, and it was near my father’s house. That’s what we occasionally ate during my divorce-kid weekend visits to the Near Southside. I always found it exotic – like eating an animal on the endangered species list. Other than that feverish rush of deviltry, the place left no impression on me. The chain pretty much disappeared, and I’m not sure anyone, except maybe my father, even noticed.

But the Austin-born purveyor of fast pie aggressively re-launched last year, and its new flagship franchise stands proudly in the Fort. The space is cavernous, with floor-to-ceiling windows and slick, wooden Pottery Barn-esque décor. There are also free video games for parents who want an hour or so away from their kids.

The price point at Gatti’s is also nice for families: On my visit, a personal pie, salad, and drink were around $10. The pizza is thin-crusted, and the sauce tasted surprisingly flavorful and fresh for a chain. Nothing except the value (especially considering the location) will drop your jaw, but I’d put it right on par with the other successful pizza chains. The experience was a far cry from my childhood memories, but that’s probably a good thing, since that iteration of the company buckled beneath the jackboot of Domino’s and others. Also, I wasn’t sad about my parents getting divorced anymore. So everything tasted a little better.

Speaking of places I frequented during my pre-teen years, Parton’s has occupied the same stripmall location on Cherry Lane since the Fillmore administration. I remember it as a happening spot for birthdays, after-soccer gatherings, and other kid-friendly events. The tiny, all-you-can-eat pizzeria even sponsored Little League Baseball teams back in the day.

If you want the whole time-machine experience, Parton’s hasn’t changed much since … ever. There’s a faded sign hanging above the storefront, checkered tablecloths, red, sparkly plastic booths, colored glass light fixtures, and faded photos hanging on the walls. On my recent visit, Gene Rayburn’s Match Game was even playing on a television in the corner, and “Just When I need You Most” by Randy VanWarmer piped through overhead speakers. Had Rip Taylor barged in throwing confetti, I might have needed a calendar to confirm the date.

The dining room was packed. And thin-crusted pizzas with myriad toppings were flying out of the kitchen –– which was fortunate considering there was one jerk who kept taking a single bite of pizza and going back for more. There was a second buffet for salad, condiments, and one metal bowl filled to the brim with that sweet, sweet pudding. The whole lunch cost only $9.50, so maybe that guy who kept returning to the buffet line was trying to drive the per-slice cost down to less than $1 each.

If Gatti’s is shifting its brand image, Parton’s has been driving the speed limit on cruise control in the left-hand lane for years. Still, I’m glad there’s room for both in our growing, changing, ever-fancier pizza scene. Sometimes it’s nice to remember.