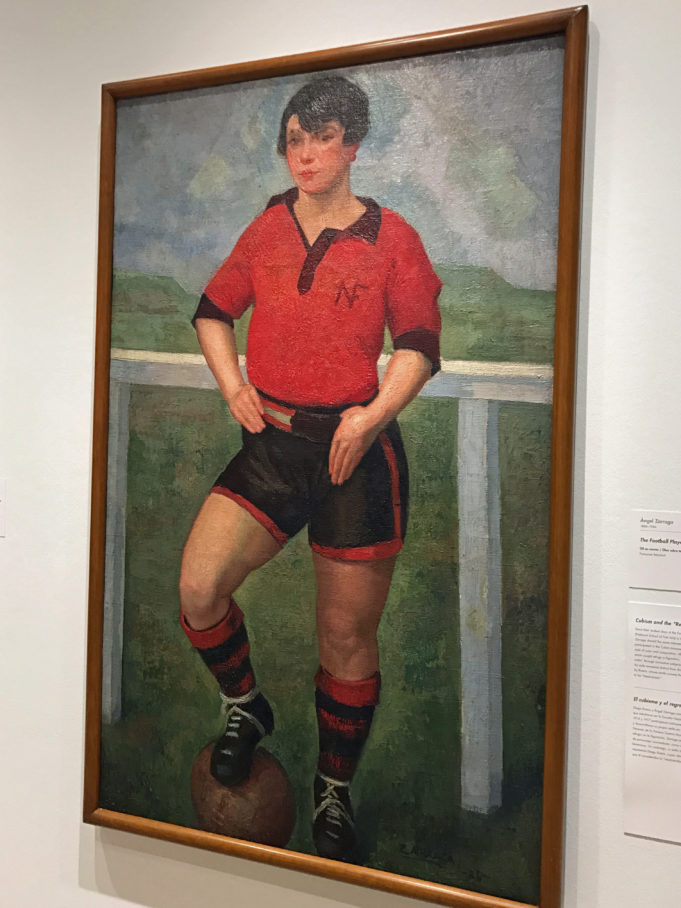 Sometimes, color matters in sports. Uniforms help us tell the competitors apart. We express allegiance to our teams by wearing silver and blue or victory green. Ballparks contrast a dark batter’s eye backdrop against a white baseball.

In art, color becomes even more essential. A muted palette may suggest one set of emotions, while bright colors imply something whole different. Use of color can define an artist.

Sometimes the worlds of sport and art colorfully intersect, as I noticed on a recent visit to the Dallas Museum of Art. Along an upstairs wall hangs a painting by Ángel Zárraga called La futbolista. The museum brought it in as part of the exhibition México 1900–1950: Diego Rivera, Frida Kahlo, José Clemente Orozco, and the Avant-Garde, an installation of nearly 200 works executed in multiple media by early-20th century Mexican artists.

Zárraga’s painting depicts a female soccer player posed in uniform, seemingly ready for a match to begin. Dr. Anna Katherine Brodbeck, The Nancy and Tim Hanley Assistant Curator of Contemporary Art at the DMA, said via email that “Zárraga, like many other artists in the exhibition, was interested in portraying strong, modern women, engaged in tasks beyond what would have been expected of them in the traditional society of pre-revolutionary Mexico. A woman football player exemplifies this modernity.”

The 1910-1920 Mexican Revolution, which deposed a long-time dictator and hoped to shape a more forward-looking and equitable society, provides context for the artists’ expressions. As their countrymen and women looked to elevate their nation’s status, the painters, sculptors, and filmmakers tried to do their part. Brodbeck describes them as “some of the most sought-after artists in the US and Europe,” with Rivera, for instance, receiving just the second one-person exhibition at New York City’s Museum of Modern Art. The art world saw value in the images these men and women created. It didn’t matter that they came from a Central American country many might have previously considered culturally backwards.

In sport as in art, performance should, and often does, trump all else. A Jackie Robinson can show that African-Americans belong in Major League Baseball; A Doug Williams can prove a black quarterback can win a Super Bowl; A Dominican, David Ortiz, can pretty much own a New England city known for bursts of racial intolerance.

It’s tougher to smear a minority group as inferior when members of that group reveal themselves as world-class practitioners of something. The idea that governments should limit business or personal contacts with people solely because of national origin seems less viable when we can envision those persons being the next Diego or Mariano Rivera.

Brodbeck noted, “The exhibition highlights historical moments of close cross-cultural exchange between the US and Mexico—times when pan-Americanism was politically attractive– and is proof that there is strength in our unity and our similarities vastly outweigh our differences.”

The DMA’s México 1900–1950 presents an opportunity for visitors to experience, and more importantly, appreciate a culture sometimes portrayed as second-class. Art devotees know it to be otherwise – this show debuted in Paris, France, not exactly an artistic backwater.

Will it succeed in bringing people together? Kimberly Daniell of the DMA’s public relations staff supplied me with some of the glowing comments visitors have made about the exhibition, including phrases like “The show is spectacular” and “It was fabulous!” As I examined some of the commenters, I spotted surnames like Gomez, Olmos, and Gutierrez. But I also saw monikers like Feingold, Tran, and Sprague writing things like “Love Frida!“ While I don’t know the specific backgrounds of any of those involved, that feels like cross-cultural exchange to me. Based on the attendance figures Brodbeck supplied, more than 50,000 people have participated in such exchange so far, and the exhibition will run through July 16.

Colors often matter in sport and art. But sometimes they don’t. The color of the hand that wields the paintbrush or shoots the basketball carries no importance. It’s what ends up on the canvas or in the hoop that is what we care the most about. That distinction is actually pretty black and white.