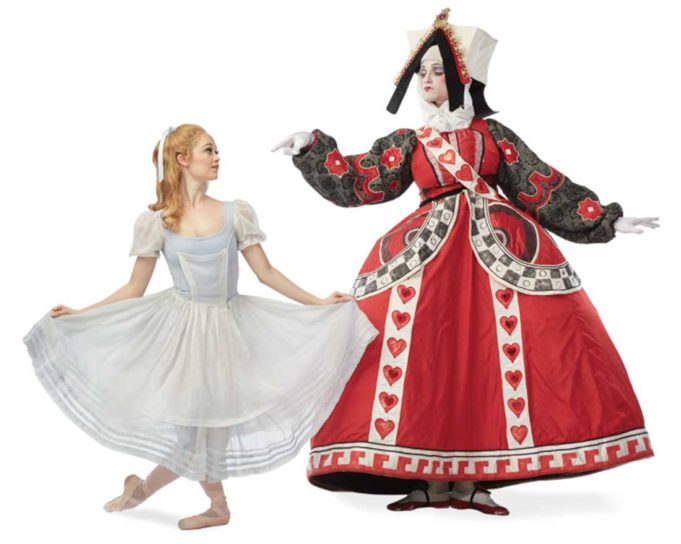 To stage Lewis Carroll’s Alice’s Adventures in Wonderland, with its array of exotic characters, is a major effort for any company. Texas Ballet Theater artistic director Ben Stevenson accepted the challenge in 1992 when he headed the Houston Ballet, creating a unique and engaging work, one appealing to adults as well as children. TBT revived it 10 years ago as a season closer and again last weekend in Bass Performance Hall to end the current season here.

A great piece for TBT, Alice in Wonderland shows off its dancers in both character and classical roles. The curtain went up Saturday night with Alice (Carolyn Judson) sitting outdoors on a bluff reading a book. Breaking classical dance tradition, she looked up and started speaking. In what is becoming a problem with the Bass Hall sound system, I couldn’t understand most of what she said. The sound wasn’t harsh, just muddied. In the end, it didn’t matter. The White Rabbit (Andre Silva) appeared, waving his pocket-watch in front of his face and inviting Alice to follow him. She slid down the rabbit hole.

Suddenly she was surrounded by a host of friendly creatures – a dodo bird, zebra, unicorn, lion, ram, and many more – all dancing around. But like little Clara in The Nutcracker, Alice doesn’t do much dancing. She’s an observer like the rest of us. The wonderful and imaginative costumes created by English designer Nadine Baylis – and there were scores of them by the end of the ballet – were stunning.

Austrian composer Joseph Horovitz’s pleasant score in many places seemed like a 19th-century ballet. The rousing waltz in the first act, for large corps and soloists, was reminiscent of Tchaikovsky. Stevenson had choreographed some brilliant ensemble patterns that were not easy to keep together, but the dancers stayed straight on the mark. Conductor Michael Moricz led the Fort Worth Symphony Orchestra in the pit with exuberance and sensitive shaping of musical lines. What a joy to have a live, handsome-sounding orchestra with the company again.

There was also a beautifully performed classical pas de deux, danced by Leticia Oliveira and Jiyan Dai, that allowed them to shine in gentle moves together and then explode in showoff solos. Dai earned a loud ovation for his athletic jumps and turns.

For a small regional company, TBT has some of the best, and best prepared, dancers in the Southwest. This was particularly obvious in the finale, in which every performer (and they had to raid the Ballet School for extra dancers) filled the stage in remarkable ensembles that passed through one another without a hiccup and brought down the house.

Stevenson recently returned from Australia, where he set Tchaikovsky’s Swan Lake for the Queensland Ballet. After TBT completes its Alice run in Dallas (June 2-4 at the Winspear Opera House, accompanied by the Dallas Opera Orchestra), he will take a month off to vacation in France’s Loire Valley. Talk about a wonderland.