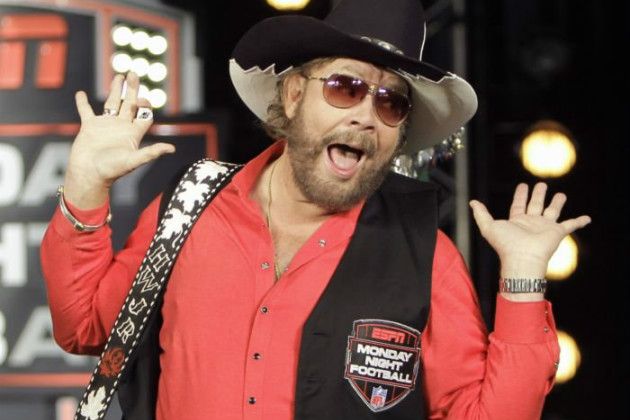 He might be politically outspoken, obnoxious, lyrically self-obsessed, and kinda weird in general.

Where was I going with this?

Oh yeah, nobody can say that Hank Williams Jr. isn’t the best at kicking off Monday Night Football. (OK, I suppose somebody could dispute that claim, but they would be wrong, so screw ’em.)

Kudos to ESPN for realizing how dumb they were in 2011 when they told Williams, “Are you ready for some retirement?” He had been singing the opening song since 1989. The network announced it is reversing course.

The right-leaning Williams, who probably considers Ted Nugent a pinko liberal by comparison, had mouthed off during the Obama administration. Nowadays, after listening to Donald Trump’s un-edited thoughts falling from his pie hole every day, Williams’ remarks in 2011 sound tame.

Back then, Williams became upset after then-President Obama played golf with John Boehner, a top Republican. The outlaw singer went on the Fox News Channel to voice his complaints. As usual, he said little that made sense. He’s just kind of a punchy asshat when he speaks. Williams mocked the meeting between Obama and Boehner as “one of the biggest political mistakes ever,” and compared it to Adolph Hitler playing golf with Israeli Prime Minister Benjamin Netanyahu.

Then he compared Obama and Vice President Joe Biden to the Three Stooges.

He’s no better at math than analogies.

He tried to explain himself by saying it was silly for politically polar opposites to meet, talk, and play golf. Seeing Boehner yukking it up with a yellow dog Democrat on the putting green made Williams and his right-leaning buddies so dadgum angry they felt like spitting wads of tobaccy in the dirt or something.

After Williams was fired, I can’t even remember who MNF replaced him with. Was it Carrie Underwood? No wait, she is Sunday Night Football? Katy Perry? Britney?

Hell, I don’t know, and that pretty much sums up the problem. Whatever the network has been doing to open the show since 2011 is completely forgettable.