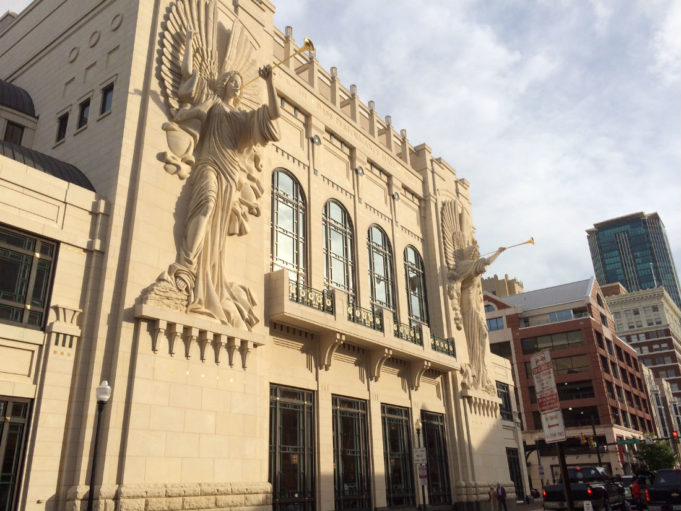 Weird thing happened today: I created an entry on Genius.com for Scott Joplin’s “The Entertainer” this morning, and then this afternoon, there were two girls about 10 years old playing “The Entertainer” on the player piano in Bass Hall’s lobby. Tomorrow morning, I’ll create an entry for Kaikhosru Sorabji’s four-hour-plus Opus clavicembalisticum and see what happens. I’d pay good money to see two 10-year-old girls play that one. In other news, USA’s kids lost in the under-20 World Cup to Venezuela, crashing out 2-1 in extra time. Bummer, most of the entrenched superpowers had already been eliminated and the title was wide open. Well, on to the World Cup qualifiers later in the week.

Chen Han opens the morning session with a stellar recital, playing the Bach-Busoni Chaconne with a welcome lack of bombast (at least until the end, where bombast is more or less unavoidable) and building up nicely to the stormy parts. He continues with Scriabin’s Fantasie in B minor, reaching those scorching, hair-raising extremes familiar to those of us who are fans of Scriabin. His interpretation of Leoš Janáček’s 1. X. 1905 conveys something of the desolation and despair of this sonata that was written to protest Austro-Hungarian troops killing a Czech carpenter for demonstrating in favor of a Czech university in Brno. Janáček wound up being one of the great opera composers of the 20th century, but this piece makes me wish he had written more for piano. Lastly, the pianist from Taichung, Taiwan absolutely crushes Schubert’s “Wanderer” Fantasy, playing the piece with diamond-like clarity. I can’t recall a better Schubert performance I’ve heard at this competition.

Things don’t go so well for Rachel Cheung, the last woman left standing in this competition. I liked her preliminary recital full of miniature pieces, but she’s on to large-scale works in this semifinal, and her performances of both Schumann’s Kreisleriana and Prokofiev’s Sixth Piano Sonata display the same flaws, as she excels in the big, emotional parts but loses the thread in the smaller, lyrical parts. This is fatal to
Kreisleriana, with the character of Kreisler having no mystery about him in her rendering. It is much less so with the Prokofiev, where she does quite well in teasing out the humor in the slapstick second movement and renders the opening movement and the finale with great aplomb. I like it, but I had higher hopes for this performance.

I am informed today that the cadenzas that Broberg played in his Mozart concerto were entirely his, not improvised on the Mozart originals, so those of you scoring at home, take note. With the fantastic evening we had of concertos last night, you might have figured we were due for some substandard ones. Up steps Sun Yutong with his version of Mozart’s 20th Concerto. I compared the performances of this piece last night to powdered sugar and lemon curd. This one’s an unflavored rice cake: unobjectionable, certainly preferable to nothing, but utterly lacking in distinction. The pianist fails to blend in with the orchestra, getting drowned out in the second movement (and not even by the full orchestra — the wind instruments alone are rendering him inaudible). I’m looking for positives to take away from this performance, and I’m coming up empty.

The evening picks up a little bit with Kim Hong-gi, who is the only semifinalist to choose the 23rd Piano Concerto in A major. (From here on out, it’s all 20s and 21s for us.) He puts an interesting spin on the first theme in the opening movement and brings some intriguing moonlit darkness to the beginning of the second movement, and his tone is attractive as always, but I still could ask for more sparkle, more personality, more energy, more anything to inject some life into this piece.

I’ll admit I had serious misgivings particularly about Yury Favorin’s ability to scale down his playing for the Mozart concerto. I’m pleasantly surprised, then, by the job he does on Concerto No. 21. It’s not the easiest fit, and sometimes he threatens to burst out of the piece’s tidy confines, like a bodybuilder forced to squeeze into a tuxedo. Still, he delivers the best performance of the evening so far, using cadenzas by Robert Casadesus, the great French pianist and highly esteemed Mozart interpreter. I can’t predict how this pianist will do from one round to the next, but he’s capable of good stuff.

Also exceeding my expectations is Georgy Tchaidze at the end of the evening. He starts the Mozart 20th, and even if the first two movements are prettified somewhat, I’ll still take it if it means he’s not boring me any more. He’s playing it cagey, though, because he snaps into the third movement with the sort of dramatic urgency that I haven’t heard from him so far in this competition. I wonder if it’s because he wrote the cadenza in that last movement himself? (He used the Beethoven cadenza in the first movement, just like everyone who’s played this work so far.) Well, I like his cadenza, which takes material from the movement and turns to un-Mozartean but clever ends.

I’m still worried about burning out. We’re hearing two more performances of that 20th Concerto tomorrow, and I can’t help but fret about whether I’ll still be able to hear the piece then. I’m hanging my hopes on those cadenzas, which the other competitors will be using some different ones of, to keep my ears fresh.