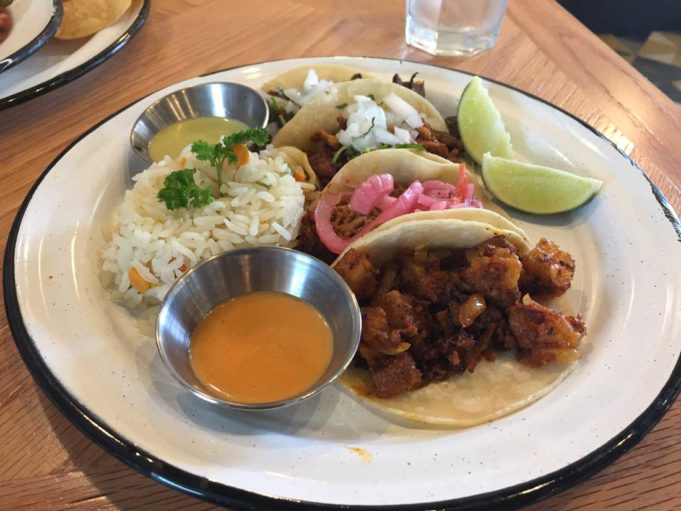 When we arrived, the staffer who cheerily greeted us at the door described the place’s ordering process as like that of Jason’s Deli. That seemed confusing for a couple of reasons: 1.) Jason’s doesn’t have some kind of proprietary ordering system. The staffer could have just as easily said, ‘You order, and we bring it to you, like 10,000 other restaurants.’ Instead, he singled out the deli chain, and all I could think about was soft-serve ice cream. And 2.) the Mexican market concept at Americado Mexi Food Hall (2000 W Berry St, 817-759-9107) isn’t so straightforward.

Americado really wants you to know that it serves Mexico City-inspired street food –– so much so that the owners crammed into the dining room three different stations all intended to evoke street vendors. Our little rag (“Design Flaws,” April 5, 2017) and others have likened the Berry Street eatery’s food/drink obtaining process to a chaotic food court, where you stand in multiple lines and pay multiple checks –– without the variety. The whole concept seemed, to a lot of folks, gimmicky, clunky, and confusing.

On my recent visit, our young host hustled to the door as we walked in, ostensibly to get out ahead of any confusion we might have felt wandering around the dining room. The whole operation seemed easily navigable, although I was just there for lunch and didn’t imbibe. We ordered, food arrived at our table, we ate it. Badda-boom.

The difficulty of ordering may have been exaggerated, the place was not without its flaws.

From afar, the building’s perforated sheet-metal roof looks like a futuristic Jiffy Pop pan. Inside, the space feels cramped with more kitchen areas than tables. When the place is dead, as it was when I was there, it exacerbates the absurdity of the concept, as kitchen folk stood around looking bored.

The service was pleasant but so disorganized I thought the Benny Hill theme music might pipe in through the overhead speakers. The kitchen forgot my appetizer of mole fries ($8), made the wrong order for my guest, and our server never once refilled our waters. (I got up twice and went to the bar.) That might have been forgivable were we not one of only three tables seated in the whole building.

The food that made it our table was good, though nothing stood out as great. The appetizer shrimp ceviche ($11) was a competently bland version of the Mexican food staple, with the very confusing addition of green olives and capers. Management might be better off renaming the fries simply “mole potatoes.” The frittes were limp and lifeless, however, the decadent slathering of semi-sweet mole and queso fresco atop the fluffy mound was the best thing that went in my mouth that day.

My mix-and-match tacos were decent, served four to a plate ($10) on tiny corn tortillas. The best of the lot was the pastor, a mélange of spit-roasted pork, grilled pineapple, onions, and cilantro. My guest ordered one each of the grilled shrimp and fish Baja tacos ($11), but two fish tacos arrived on his plate. That turned out to be a happy accident, as the fish was tender, flaky, and tasty. He didn’t miss the shrimp.

Our dessert of churros ($6), filled with caramel, crusted with sugar, and served with plenty of chocolate for dipping, is the kind of crave-worthy dessert that should be served with insulin. You’d be crazy not to order the fried morsels. I’d take them over soft serve any time.