I’ll start this review by admitting that I haven’t read Thomas Cullinan’s 1966 novel The Beguiled, which was first made into a movie in 1971 that starred Clint Eastwood. It was a film of its time, with its soldier protagonist beset by castrating harpies, done up in director Don Siegel’s characteristically blunt style that played up the violence. Now the book has been made into another movie, this one done up by writer-director Sofia Coppola in her characteristic style: lyrical, elliptical, more willing to assume the female viewpoint. The advance critical word on this has been split between bold feminist revision and gorgeous but empty exercise in style. My opinion tends toward the latter, but I do have a soft spot for gorgeous but empty exercises in style, and I’d watch her The Beguiled again before re-watching any of her previous three films.

The film starts in 1864 at a handsome but overgrown Virginia mansion that has been repurposed by its owner Miss Martha (Nicole Kidman) into a school for girls. The place is in Confederate territory, but the fighting is close enough that cannon shots can be heard on the house’s ancient Greek-style front porch. The slaves and most of the students have fled, but Miss Martha and her lone fellow teacher Miss Edwina (Kirsten Dunst) have kept the school open for its five students who have nowhere else to go. Into this environment stumbles Cpl. John McBurney (Colin Farrell), an Irish Union soldier from New York who has fled the fighting but not before being wounded in the leg. Laid up, the grateful soldier starts flirting with everyone in the house, whether it’s to pit these women and girls against one another or because he’s played by Colin Farrell. Either way, his masculine presence upsets the dynamic in this isolated all-female enclave, with violent results.

I think this Southern Gothic potboiler could have used a filmmaker like Claude Chabrol or Park Chan-wook who could file down the story’s free-floating psychosexual tension to a knife’s edge. Then again, wishing for that quality from Coppola is like wishing your lace curtains could cut through steel. I don’t fault her for failing to be a whole other filmmaker, but I do fault her for failing to make much sense of the school’s oldest student and resident bad girl (Elle Fanning), and for failing to get more out of the disconnect between Miss Martha, for whom the school is everything, and Miss Edwina, who longs to escape the place.

Even so, the movie is beautiful to look at, as if that still needs to be said about a Coppola film at this point. Philippe Le Sourd’s cinematography takes in the house’s flickering candlelight and gives these people a gossamer appearance that somehow heightens the effect when the bloodshed starts. Coppola does find some good comedy among these women who are starved for male attention, never more so than a scene when the corporal compliments the apple pie he’s been served and everyone rushes to claim a share of credit for the pie. Kidman makes a sharp impression as the voice of pragmatism while the situation spirals out of control — you won’t soon forget her determined delivery of the line “Get the saw” — and Oona Laurence (previously seen in Bad Moms and Pete’s Dragon) is the best of the young cast as the girl who finds the soldier and conceives a crush on him. And for all the film’s dramatic shortcomings, there’s no denying the awful power that Coppola conjures up in the slow-rolling climactic scene over a dinner table. There’s more than one way to do a thriller like this, and despite the faults in the execution, I am glad that Coppola has shown us another path. 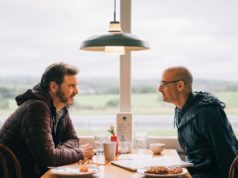