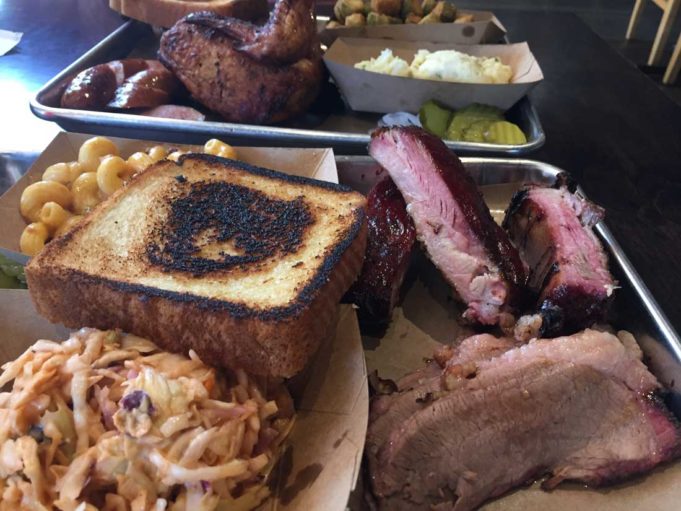 Here’s reason No. 1 why I think Honey Smoke Pit (2600 W 7th St, 817-720-7288) will make it in the doomed space at Montgomery Plaza: It appears to be really well run — on first glance, anyway. Every single one of the other restaurants that have occupied that sinkhole over the last several years has failed miserably in the front of the house — with the possible exception of M Bistro, which I never got a chance to visit since it was open for only 17 minutes.

I knew the week-old eatery was different the moment my guest and I arrived, and a team of scantily dressed female servers greeted us like we were returning war heroes. The team of jorts-and-boots-clad young women was prompt, polite, and attentive. The place isn’t exactly a breastaurant, but I know my male guest was appreciative of the view.

Pitmaster Rodney Lambert (Fred’s Texas Café, Smokey Mae’s) took time away from churning out plates during a busy lunch service to thank us for stopping in. The décor does little to separate itself from the space’s past failures. Besides a few cursory animal heads on the walls, the interior looks like a trophy case for some sick weirdo who collects dead restaurant relics. There are still leftover pieces of Bite City Grill’s Thai-meets-French vibe.

Reason No. 2 that I think the Pit has a shot is that it isn’t another fine-dining bistro. Upscale concepts are 0 for 6 in that spot. Sure, Fort Worth already has a glut of ’cue joints, but none has ever graced Monkey Wards. And, third and best reason of all, the grub is pretty darn good.

Lambert’s menu is all standard-looking barbecue fare: brisket, ribs, sausage, chicken, burgers, sides, meat by the pound, and so on.

My guest and I each went for the Double Down ($13.99), a combo of two meats and two sides. Each of the butcher-paper-covered metal trays were pouring over with food, including buttery Texas toast, pickles, and an ample supply of fresh onions.

My pork ribs weren’t falling off the bone, but the skin was crispy and the meat deeply smoky. The brisket was fork tender and well seasoned, with a modest smoke ring and intensely flavored bark – the meat was aided by the chef’s special spicy barbecue sauce. (Stay away from the housemade habanero sauce unless your stomach is made of Valyrian steel.) My guest’s chicken was beautifully moist and falling apart the way the ribs should have. The bird was probably the best thing we put in our mouths. A close second was the snappy, spicy jalapeño sausage. If we had one complaint, it’s that the proteins were all served lukewarm.

Mac ’n’ cheese fans will celebrate the kitchen’s rich, creamy, sweat-inducing jalapeño-infused version. For those who can’t handle heat or just want something to balance the menu’s decidedly piquant leanings, the red cabbage cole slaw was tangy, cool, and fresh tasting. Fried okra snobs need to check out the pit’s offering of crunchy-on-the-outside veggies that practically oozed pockets of steam at every bite. The only side we didn’t care for was the rather bland potato salad, but a few squirts of the sharp, vinegary house sauce elevated it.

You may not think it’s a big deal, but the restaurant operated smoothly, and that’s almost never happened to me at that location before. That alone makes Honey Smoke Pit a good bet to break the curse. Hopefully Lambert and company made the appropriate sacrifices to the restaurant gods to make this the last time I ever write about that damn curse again.