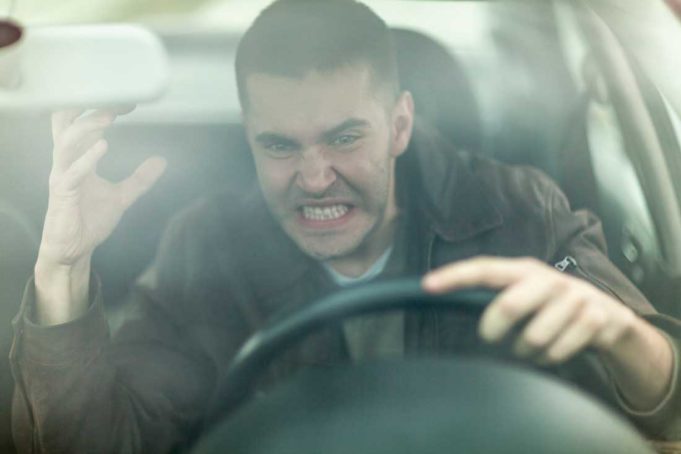 Pulling a gun while road raging is brainless. Anyone who resorts to gunplay on the road needs jail time, counseling, a new mantra, yoga classes, and probably more sex. We stand firmly against violence over matters as trifling as transportation. We will further argue that violence or the threat of violence is permissible only in self-defense.

Despite this courageous stand, there’s something we gotta say. Many years of driving Texas roads and observing motorists have led us to a conclusion: Countless road raging incidents are caused by people driving slowly in the left lane, sometimes purposely just to prove a point. Do we have studies to prove this? Um, no. But there are studies that show that crowded roads combined with the anonymity of motorists being cocooned inside moving metal boxes – deindividuation, as the eggheads call it – creates the psychology for raging.

More specifically, the main reason for road rage is tailgating, according to separate studies by the AAA Foundation for Traffic Safety and the RAC Foundation, a London-based transport policy and research organization.

So why does tailgating occur? Usually because some guy, and it’s almost always a guy, is trying to get somewhere fast but can’t because, you know, he doesn’t own his own private highway and we’re all slowing him down. But that doesn’t mean the tailgater is always the heavy.

Lawmakers across the country are introducing bills to curb road rage, with many citing law enforcement officials as saying left-lane dawdling is often the impetus of the anger.

If life were simple, we could distinguish heroes and villains with ease, like in those old John Wayne movies (well, before Wayne outed himself as a white supremacist to Playboy in 1971).

This summer alone, about a half-dozen motorists in North Texas have fired handguns in anger during road disputes, including in Arlington, Mesquite, and North Richland Hills.

Nowadays when two motorists clash, one will download cellphone video to social media showing the other driver getting angry, yelling and, at times, resorting to gunplay. Earlier this month, a woman videotaped someone waving a gun at her in Lancaster. She pointed her phone at a man driving in a lane to the right of her. Other motorists could be seen passing in a lane to the right of the gunman. This seems to indicate the woman driving was in the left lane. (Later, the gun-wielding man turned himself into police, saying he pulled his gun because he thought the woman was pointing a weapon at him. Eeeyeah.)

Rarely shown in these types of videos are the thousands of other motorists who pass the left-lane hog and keep going on their merry ways. Meanwhile, the “victim” blocking the flow of traffic is texting, talking, oblivious in general or, in some instances, purposely blocking the roadway just to be an asshat.

We know a woman who insists on driving 5 mph under the speed limit in the left lane wherever she goes. You can recognize her by all the cars lined up behind her, trying to pass on the right. Most pass and keep going. Some cut in front of her quickly, honk their horns, yell, or do something to let her know she is rude. She just stares straight ahead, hands at 10 and 2 on the wheel, paying no mind.

One day, we asked why she drove this way.

She is free to drive in whichever lane she wants, she said.

But why the left lane?

If anyone doesn’t like it, then too bad, she said.

Finally, the truth – “People drive too fast,” she said.

See, this woman believes it is her duty to slow down drivers or at least inconvenience them by dawdling in the passing lane, kind of a figurative way of flipping off anyone driving over the speed limit.

This woman has never had a gun pulled on her despite angering motorists by the hundreds of thousands over the course of her life. If, at some point, she finally pisses off the wrong wacko who pulls a gun, she will automatically be viewed as the victim rather than as the passive-aggressive serial antagonist that she is. She’s a Reverse Road Rager.

Another person we know likes to plop his car in the left lane and text while driving. His reasoning? That way, cars can’t come up beside him on the left. He has to pay attention only to the cars in front and to his right while he is swerving all over the damn place at 60 mph. Driving in the left lane means one less distraction for him. Screw everyone else.

Let’s say you’re walking in the park and see a family sitting on a blanket and having a nice picnic. You decide that the one place you want to stand is on that square foot of grass beside the picnicking family. After all, your taxes pay for the park. And, yes, there are 10 other acres of empty green grass all around, but you have every right to stand next to that family. And because of diet and intestinal issues, you cut massive farts every 10 seconds. (Damn you, IBS!)

While you stand beside the family and toot, they, naturally, ask you to move elsewhere. You say nothing, just stand there and destroy the ozone one methane-released mini-bomb at a time. When they ask again, you pull out your cellphone and start videotaping them verbally attacking you. Post that video online, and you’ll get tons of likes!

Who is the rager? The victim? The jerk? And who the hell allowed that fart analogy to get into print? (Editor’s note: The editor is napping now, or he would leave a note.)

Most states have laws requiring motorists to move to the right. The Texas Transportation code says highways are designed for slower traffic to travel in any lane other than the farthest left lane. The law doesn’t say it’s cool to drive in the left lane if you are driving the speed limit. It says to move to the right regardless. This breakdown is the root of rage.

“After you pass someone, move into the right lane once you’ve safely cleared the vehicle,” states the Texas Department of Transportation website. “Impeding the flow of traffic by continuing to drive in the left lane is punishable by a fine of up to $200.”

Numerous states have increased penalties for left-lane hogging in recent years. Virginia legislators passed a law that allows issuing a $250 fine for driving slower than the normal speed of traffic while in the left lane or for staying there when not passing other vehicles. State law had designated left lanes for passing only but did not provide for a fine. Earlier this year, the Virginia Times-Dispatch quoted Istrael O’Quinn, the Virginia delegate who introduced the bill. “Left-lane bandits,” he said, are a safety hazard.

Congesting the left lane is “something that law-enforcement officers many times can point back to as the root of a number of road-rage incidents,” he added.

Oregon lawmakers are considering a similar bill, and a newspaper editorial in Eugene’s The Register Guard said, “Self-anointed traffic monitors need to quit squatting in the passing lane on highways, deliberately creating a rolling traffic jam of impatient drivers behind them.”

Alabama legislators introduced a similar bill and called it the “Anti-Road Rage Act.”

In late July, Arlington police established a hot line to call when motorists witness road rage. The department announced the hotline on social media and received many comments, including some saying police should “focus on the people who drive too slow in the left lane,” police spokesman Chris Cook said. “That does frustrate people.”

The hotline, Cook said, has received 45 calls, none regarding someone impeding traffic in the left lane.

“However, there are several complaints of drivers within the left lane that complain about people honking, tailgating, cutting in front of them, brake checking, and flipping them off after the suspect vehicle passes them and gets in front of them,” Cook said.

We don’t believe in all that tomfoolery, but here’s what we’re going to do next time we’re driving in Arlington and come across a self-appointed highway sheriff/texter/discourteous driver camped out in the left lane because he or she didn’t get enough hugs as a child or has no control over his or her life and, therefore, can feel a sense of power only by disrupting the lives of strangers who are merely trying to get from point A to point B without going insane.